Naimal Khawar is exceptionally pretty and equally talented. She is the rare combination of beauty and brains. Naimal Khawar is also one of those few actresses who only have one project to their credit yet their popularity is unmatched. It won’t be wrong to say that Naimal Khawar’s casting in Anaa made all the difference in her career. Although she made her debut with the film Verna but it was drama serial Anaa that made her a household name. Izaa of Anaa got unprecedented popularity. Just when people were more than eager to watch this new actress again on television, they learned that Anaa was going to be Naimal Khawar’s first and last television project.

Naimal Khawar’s wedding with the most popular and wanted bachelor of Pakistani drama industry Hamza Ali Abbasi was yet another surprise for many. Naimal Khawar was already in the limelight when this wedding was announced. Naimal and Hamza quickly joined the ranks of the power couples of the world of entertainment. Naimal Khawar is actually an artist who ventures in to acting more out of fun than anything else. Since the projects she got were so good, she could not refuse them. Even though Naimal Khawar has only been seen on screen twice but she has made more impact in her short lived entertainment career than many other celebrities. People still wait for her pictures on social media and they are never disappointed.

Here are the top 10 formal and casual looks of Naimal Khawar which prove that Naimal Khawar can pull any style with grace and style both.

No one nails formal looks like Naimal Khawar does. She always makes sure that her make-up and styling is on point and the dresses she wears are always the most gorgeous. When Naimal wears an outfit, the designers get orders for these dresses almost instantly because she looks so stunning in them.

Naimal Khawar Khan loves dressing up especially for weddings and formal functions. Anyone who follows her on Instagram will know that Naimal makes sure that she experiments with colors every time. Quite interestingly, some of the outfits Naimal wore on the weddings and get-togethers she attended after she got married were more formal than the dresses she wore on her own wedding. Naimal Khawar is so attractive that she looks great no matter what she wears but she looks even more pretty because she chooses the best outfits. Naimal wore this stunning lemon yellow heavily embroidered dress on one of the recent functions she attended. Naimal Khawar gave all the girls the perfect inspiration for day time spring weddings and formal functions by nailing yet another formal look. For a change Naimal complimented this look with heavy jewelry. Believe it or not even with this heavy dress, Naimal drove to the venue herself but she also vowed never to drive in a lehnga again.

There is definitely more than one way to wear a back outfit. This latest look of Naimal Khawar Khan is slightly different from the ones we usually see her in. She hardly ever wears such heavy duppatas. The dress she wore is intricately designed and the heavy duppata is definitely the show stealer. The designer played with the colors in such a way that all of them come together to make the perfect outfit. After a long time Naimal braided her hair and she looked delightful in this look. The viewers saw her with her hair fully or half tied in a braid when she starred in drama serial Anaa and after that we have rarely seen Naimal in a fully tied braid. This dress and the overall look is exceptional. 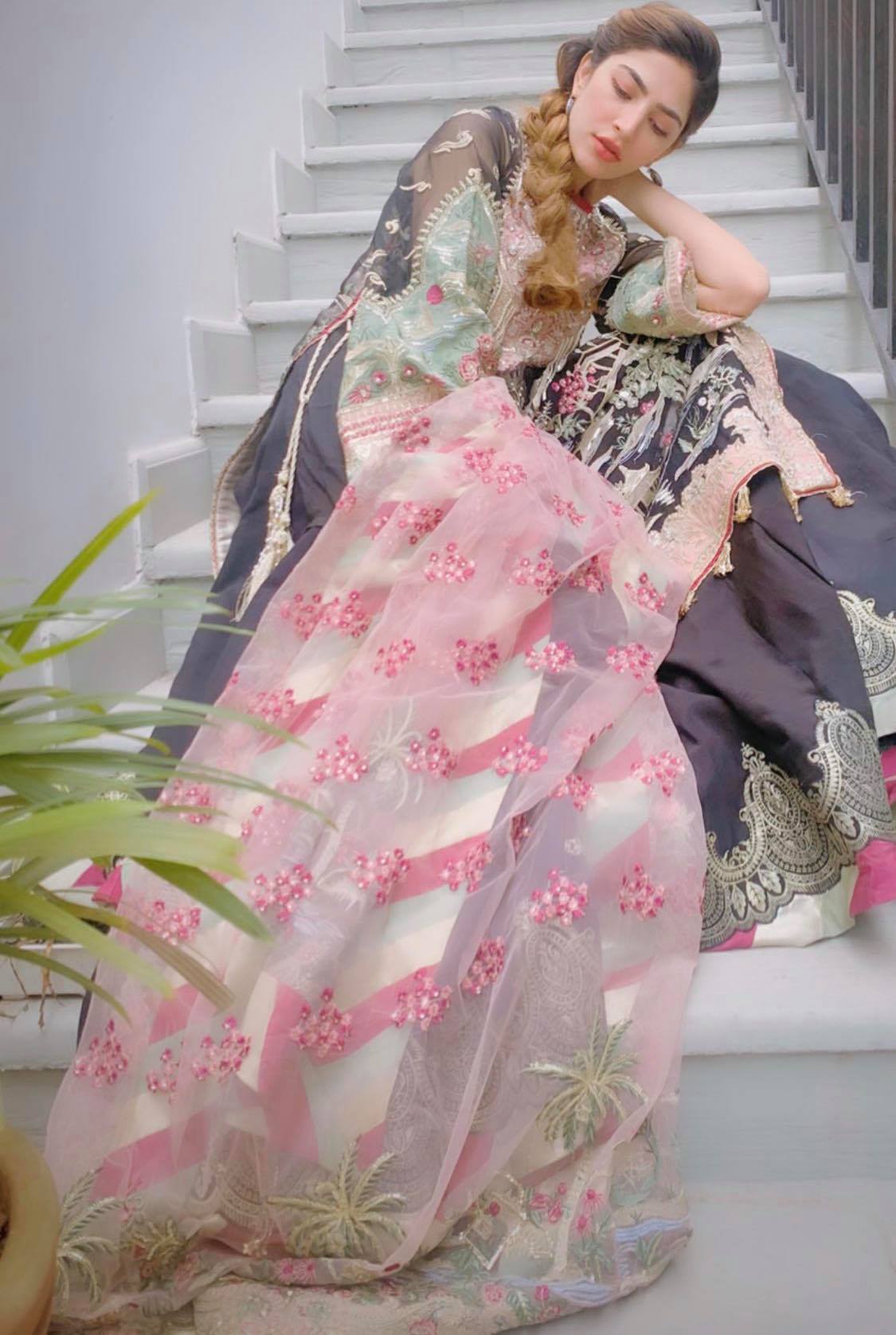 There are few girls who can pull off a white outfit like Naimal Khawar does. Usually when girls go out looking for formal outfits, white is usually not the color they prefer. Naimal Khawar has more than once showed how girls can wear white on formal occasions and look great. When Naimal posted these pictures right after her wedding, everyone was in awe of her beauty. This beautiful white formal net dress has frilly sleeves and a cut which accentuated Naimal’s tall figure. Since Naimal is an artist therefore her poses too bring out the best in her outfits. She made sure that she posed in such a way that the slit in the front was accentuated. Naimal Khawar’s whole look is even more appealing because she matched this overall white look with red lips. Naimal Khawar looks radiant and ravishing in this formal look.

Black and gold is another color combination which is most often not a preference on weddings. Well those days are long gone since many of the celebrities this year preferred wearing black on weddings. Naimal Khawar Khan wore this beautifully designed black dress with a combination of gold work. Naimal Khawar paired this heavily embroidered dress with a plain net duppata. Anyone who doesn’t want to go with something so heavy can easily do away with the embroidery on the sleeves. Naimal Khawar Khan’s overall style yet again was a complete winner in this look. Although, other celebrities were seen wearing the same dress but they did not look as appealing in it as Naimal did. She kept her make-up and styling minimal like always and it suits her the best. 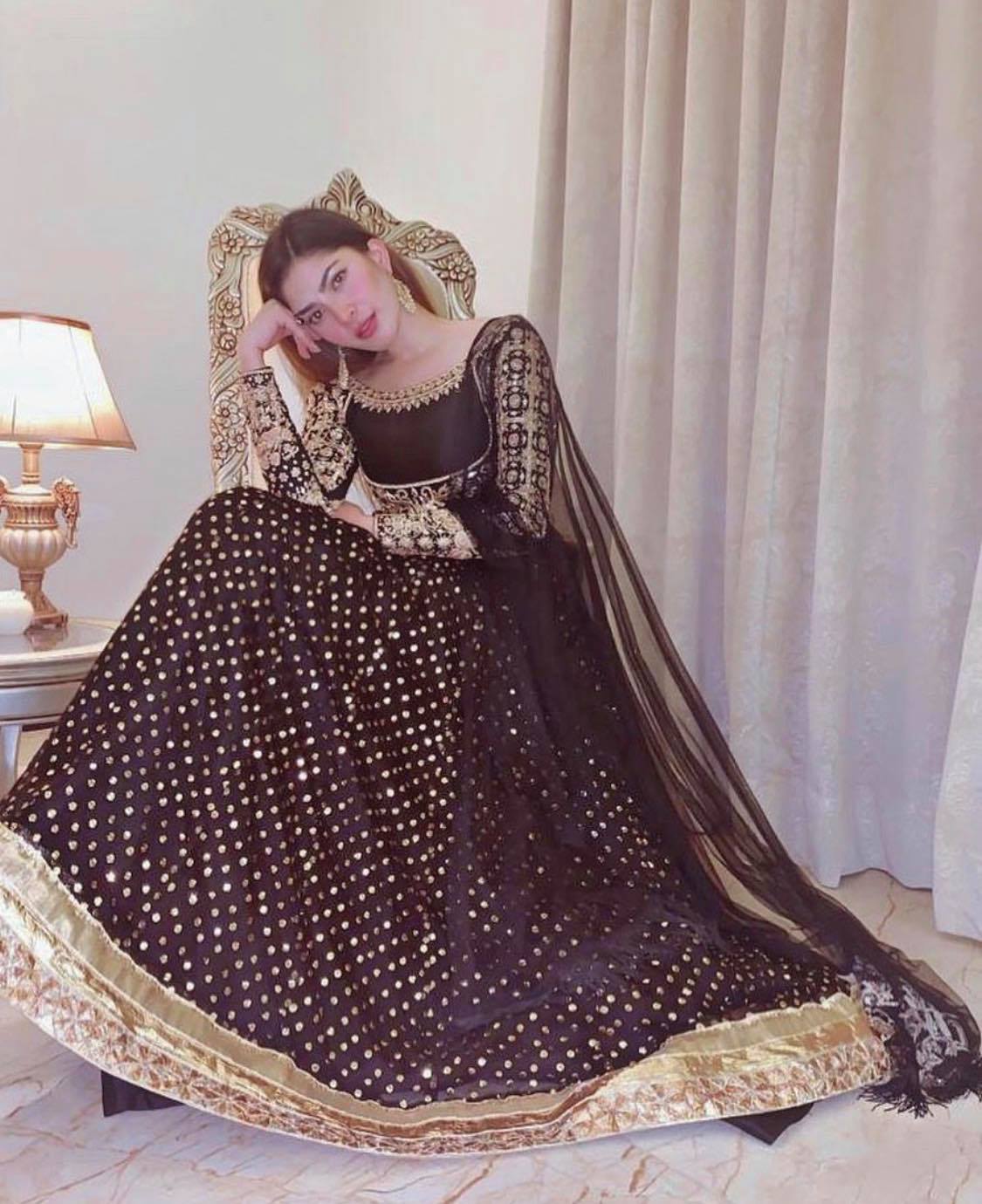 The Most Formal Look

This has to be the most formal look Naimal Khawar sported till date and she most certainly looked stunning in it. Most often, Naimal is either seen wearing black or pastel colors. This was the first time that she wore such a dark color and complimented the whole look with heavy jewelry too. The lehnga Naimal wore was heavy and this look was loved by her fans. Too bad, Naimal did not get a lot of professional pictures taken on the occasion but here are some pictures from the day which show that Naimal looks just as gorgeous in dark colors as she does in pastels. For a change Naimal’s styling and make-up was slightly more formal too. 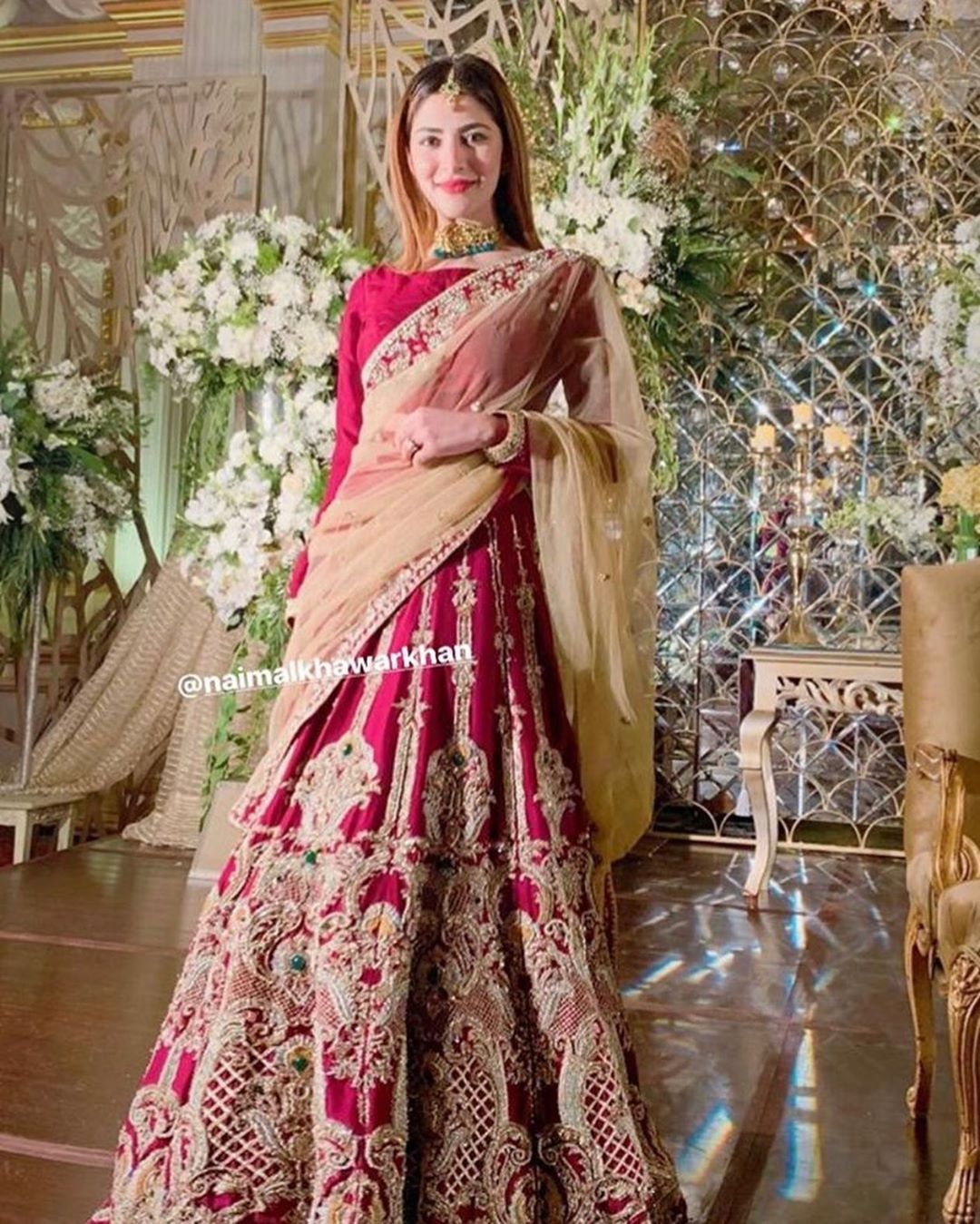 Naimal Khawar Khan pulls off casual looks just as stylishly and effortlessly as the formal ones. She carries Western wear just as well as she carries the heavily embroidered Eastern dresses. Naimal’s casual clicks are just as cute as her beautiful pictures in formal dresses. And just like her formal clicks, the thing which stands out the most are her poses and her appealing looks.

Naimal Khawar Khan sported this beautiful casual yet stylish look on Eid in 2018. Many people probably don’t know that Naimal Khawar was discovered by the director of Verna because of these beautiful pictures she posts on social media. We were not surprised to hear that because Naimal’s dress sense and her beauty does set her apart. This beautiful white dress is simple but Naimal added her own style to it by pairing it with red mehndi design and a few bangles to add that Eid effect. Once again, Naimal Khawar’s expressions and body language in this picture definitely add that stylish feature to the overall look. 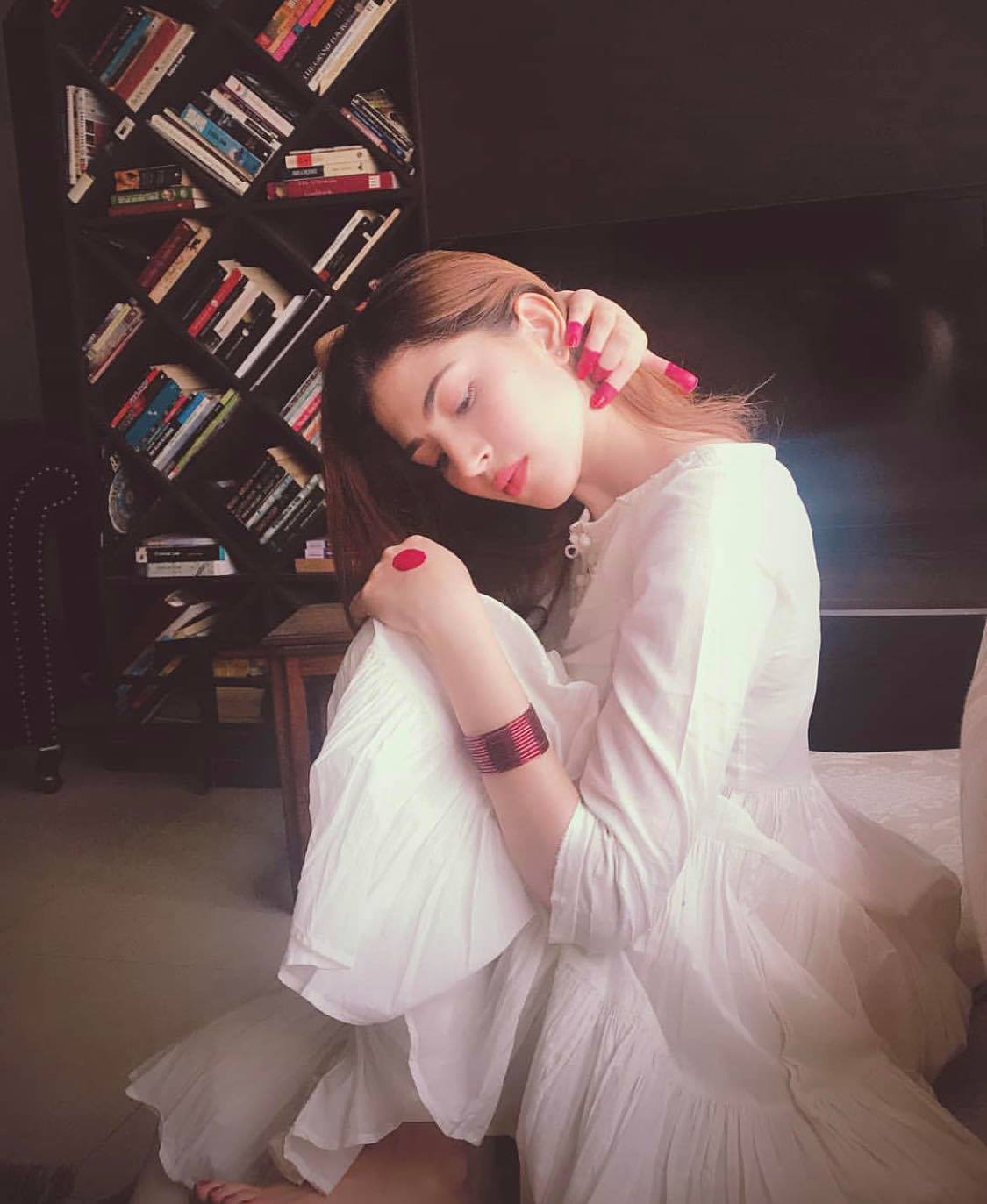 Naimal Khawar Khan is really good at riding horses. It was something she loved doing while she was growing up and when she decided to go back to doing what she once loved, she made sure, she did so with style. Naimal Khawar Khan’s look in this picture is stylish as usual. She has nailed the perfect outfit for horseback riding. And with this picture, she had an important message for everyone out there to not get so involved in their studies and careers that they forget who they are. These beautiful casual clicks of Naimal Khawar look like they are a painting. Perfect background and the perfect look makes this casual look a winner.

Naimal Khawar Khan takes her fitness really seriously which is why she works out whenever she feels she needs to do so. Naimal Khawar Khan posted these casual but gorgeous pictures in active wear before she headed out for doing Pilates. Pilates is a workout which has been a favorite among celebrities for strengthening their core and staying fit. Naimal Khawar looks cute in this sporty wear. Naimal Khawar Khan might not let the professional photographers photograph her often but she definitely knows how to capture every moment that counts for her, perfectly well on camera.

Naimal Khawar Khan has travelled to many parts of the world and she even loves travelling within Pakistan. While shooting for Anaa, she got a chance to see those parts of Pakistan which are considered the most enchanting. This beautiful click of Naimal Khawar is from one of those trips. When she and Hania Aamir went to the Kalash valley, Naimal posted a lot of beautiful pictures from there. This was one of those pictures in which Naimal is seen wearing a beautiful black Kalashi kurti with colorful embroidery.

Naimal Khawar Khan believes that there is no foot wear more comfortable than a khussa. In this casual look, she paired a plain shirt with jeans and khussa. the combination looks cool and stylish. The pastel color of the kurta looks great with the bright blue skinny jeans. The khussas of course add more style to this casual look. The lip color Naimal is wearing goes well with her shirt, perfect matching!

Which one of these looks do you like the best? Share your views in the comments section.