Ayeza Khan is one of the most beautiful actresses of Pakistani drama industry. She has been a part of the industry for a long time now and has played some of the most substantial roles in her acting career. There was a time when Ayeza Khan was typecast but not anymore. She has now decided that she is going to take up different and challenging roles and will continue to experiment, in order to showcase her acting skills and talent. Ayeza Khan has made a name for herself and it won’t be wrong to say that she is a household name.

Ayeza Khan’s currently on air drama Mere Pass Tum Ho has garnered a lot of popularity and record breaking viewership. Mere Pass Tum Ho has turned out to be one of the super hit serials of 2019. All the actors who are a part of this drama are earning a lot of appreciation. Ayeza Khan is playing the role of Mehwish. Mehwish is the kind of character that drama viewers do not get to see quite often on their TV screens. This definitely has to be the most challenging role of Ayeza Khan’s career and she has done complete justice to it. The character of Mehwish deserved a specific treatment in terms of body language, expressions and overall styling, which Ayeza Khan has taken utmost care of and has been able to elaborate it beautifully on-screen.

Ayeza Khan is one of those actors who is very much keen about the look of her character and she always makes sure to look good on screen. This is the reason why Ayeza Khan has portrayed Mehwish’s character according to the standard that she has set for herself. Ayeza Khan has looked absolutely beautiful in every single scene of Mere Pass Tum Ho. The kind of hair and makeup her team has done for her is commendable. They have played a lot with different techniques to give her certain looks in different scenes and they have shown how simplest of makeup looks can also work and make the person look absolutely glamorous.

This was probably the very first glamorous look that Ayeza Khan carried in the drama because Mehwish is shown to be attending a wedding. Ayeza Khan looked absolutely stunning in this makeup look. This makeup look was glamorous with the focus on eyes and heavy contouring. The makeup artists played with warm toned browns to achieve this eye look. She is wearing a thick eyeliner which has probably been applied with an eye pencil or gel liner and it has been diffused with black eye-shadow to make it appear merged and not harsh. The crease has been defined with brown eye-shadows as well. In this look, Ayeza Khan has done a lot of contouring. She is wearing a warm nude lipstick and to complete the look, a similar shade of blush as well. The makeup artists used a lighter shade on her eyebrows to define them but not overpower the entire look. The usage of browns in this entire look has made it appear very softer although it is a very heavy glamorous makeup look. Ayeza Khan’s eyes look bigger in this makeup look because the waterline has been been kept natural and the under-eyes have been defined with brown eye-shadow.

This is the kind of look that Ayeza Khan has carried in most of the scenes in a drama. This look has different versions where they have at times changed the lipstick shades or the colors of eye-shadows but the overall appearance of the makeup has remained more or less the same. In Mere Pass Tum Ho, the makeup artists have worked a lot on giving Ayeza Khan a perfect clean skin with touch of highlighters. She has also gone for under eye highlighting with banana powders to bring out the high points of her face. In this makeup look, her eye look is comparatively simple but right kind of blending has done wonders. The lid is covered with bronze eye-shadow and the edges have been defined using a darker shade of brown but the entire makeup look has been blended to make it look very natural. In this makeup look, Ayeza Khan is wearing a bit of pink toned blush. Her lips are glossy, which is something that Ayeza Khan doesn’t usually carry. There is a bit of bronzing and contouring going on as well but it is very much blended, giving her face a softer and not so structured look.

This makeup look is all about the dark defined eye makeup. The rest of the makeup is comparatively simple and kept to a minimum because the makeup artists wanted to keep the focus on the eyes. Ayeza Khan is wearing a warm eye-shadow and a thick black winged eyeliner. She is also wearing a kajal and the lower lash line has been covered with black eye-shadow as well, making this eye look appear darker and glamorous. Ayeza Khan’s eyebrows have been defined a lot more than usual in order to structure her eyes with darker makeup look. She is wearing a little amount of blush. The lipstick shade is a beautiful warm terracotta. There is a bit of contouring going on the hollows of her cheeks but everything is well blended. In this makeup look especially, the technique of her nose contour is prominent. The makeup artists have contoured the sides of her nose and not covered the tip. They have also applied a lot of highlighter on the tip of her nose to bring attention to it. 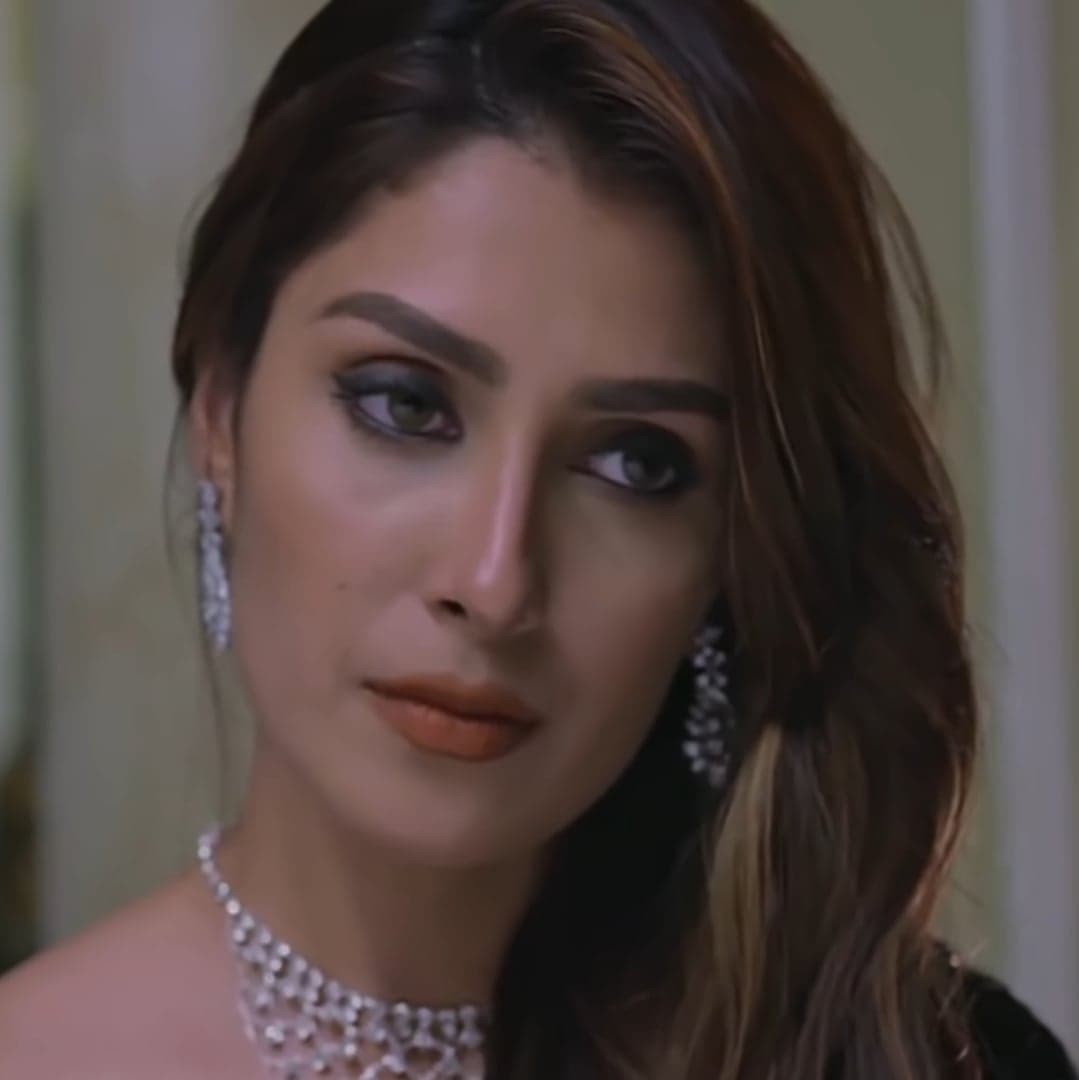 This is another version of natural makeup look which is perfect to be worn during the daytime or outing with friends as Mehwish is shown to be doing while having lunch with her friend. This makeup look is simple but absolutely beautiful. Ayeza Khan is wearing warm toned brown eye-shadow on her lids and there is a bit of definition of the crease with a darker eye-shadow. Her eyebrows are defined and darker, which kind of give her face a structure and also make her look confident and well put together. Since the blush and lipstick should be of the similar shade range, Ayeza Khan is wearing a warm toned lipstick and blush is more or less of the same color too. In this look Ayeza Khan is wearing a lot of mascara and has tight-lined the eye. She has a bit of bronzing happening around her face and there’s no contouring in this look. She is wearing a subtle highlighter on the bridge of her nose and high points of her cheeks, due to which she is getting that extra glow.

Last but definitely not the least, this bridal look of Ayeza Khan is absolutely beautiful. It is all about letting her natural beauty shine through. This makeup look is all about the glow-from-within look as well. Although the lighting has played a huge part in those scenes where Mehwish is sitting in front of the mirror and admiring herself. Even the audience could not stop admiring how beautiful Ayeza Khan looked in this scene in particular. This bridal makeup look is all about flawless base and a lot of highlighting. Ayeza Khan’s eye makeup is simple where only her crease has been defined a little, she is wearing mascara. She is wearing a pink toned blush and pink nude lipstick. In this makeup look, her eyebrows are defined but with a lighter shade of brown. The high points of her cheeks, forehead, bridge of her nose as well as her collarbones are covered in highlighter. In the scene where she is sitting in front of the mirror, there’s a pink light that has been projected on her face which makes her makeup look appear pinkier. In this scene, Ayeza Khan looked at her absolute best and flawless.

This concludes the list of Top 5 makeup looks of Ayeza Khan that she has carried in Mere Pass Tum Ho. Which ones are your favorites? Please share your thoughts in the comment section below.