Wajahat Rauf’s Next Film Is On The Way

People who started making movies again in Pakistan with confidence and fresher content include Wajahat Rauf too. His road trip comedy Karachi Se Lahore starring Shahzad Sheikh, Ayesha Omar, Yasir Hussain and Ahmed Ali Akbar was a surprise hit. The film then had a sequel named starring Saba Qamar and Yasir Hussain. He has also made his first web series starring Mehwish Hayat, Azfar Rehman and Asad Siddiqui which has just released.

The director is all set to make his third feature film and the first spell of shooting is complete. He shared a behind the scenes picture from the sets and shared that the first spell was already done. The film will have Mehwish Hayat and Zara Noor Abba in the lead roles. Both the girls were seen in some desi attires on the set. Whether it is going to be the third instalment of Karachi Se Lahore series or is it something else, that is yet to be confirmed. Here is the announcement: 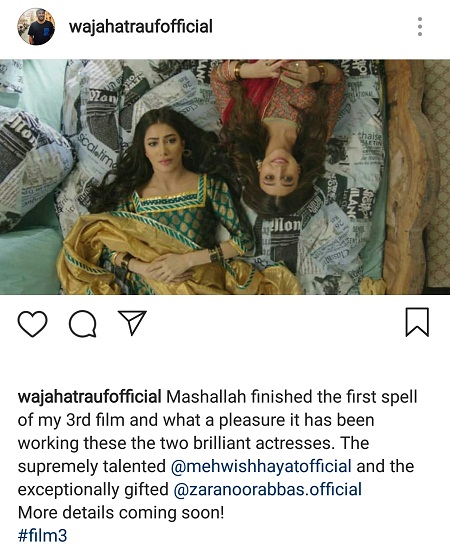 Well since the first spell of the movie is already done, an announcement will not be behind. Let’s see whether it is Karachi Se Lahore 3 or a totally different movie this time for Wajahat Rauf!