The topic “Women Empowerment” and “girl power” is a burning issue all over the world. “Women empowerment” and “women equality with men” is a universal issue. Pakistan, unfortunately, is a lot behind when it comes to this. We still live in a (mostly) patriarchal society where there are certain things that a woman just cannot do without raising questioning and sometimes even accusing eyes in her direction.

Take one simple thing such as, riding a bike. Sure, you see every now and then a bold girl, defying the norms of society, riding a bike and not letting her gender stop her from being able to do so but you also have to admit that nearly everyone in her vicinity will stop to talk about it either out loud or in hushed whispers; if not then then will at least look at her wide eyed, like she is from another planet. Some might even look at her admirably, but still do a double take. Why? Because this is, unfortunately, not a normal occurrence in our society.

And thus, it was refreshing and heartwarming to watch when Wasim Akram and Shoaib Akhtar encouraged this notion on their Ramazan transmission, Geo Khelo Pakistan. This happened during a segment of the show when a girl was invited by Shoaib Akhtar to spin the wheel and win a prize. The girl when asked what she’d like to have, requested for a bike. Upon inquiring who she wants to get the bike for, the girl informed that she’d want one for herself and she’d love riding it. Promoting gender equality, she further said that if guys can ride a bike, so can girls. The audience present in the hall appreciated this statement and showed their appreciation with a huge round of applause for her. 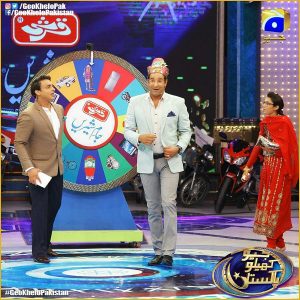 Wasim Akram, being the supportive guy that he is, only encouraged her further by gifting her a helmet along with the bike and saying that she should ride the bike all she wants.

Watching the entire segment was just delightful. The positivity that both the hosts spread  makes one think that there can be a bright future for Pakistani women in all spheres of life. Pakistani women have a long way to go to be able to have equal opportunities as men, but what is it that they say, little drops of water make the mighty ocean!

Tell us what are your thoughts on this? Do you believe girls should be able to ride bikes just like guys or is this ride just for guys?