Why watching Tanhaiyan made me nostalgic for old Pakistani dramas?

A few months ago I bought a CD of the classic Pakistani drama ‘Tanhaiyan’. What I didn’t realize was how much it will impress and impact me. Tanhaiyan written by Haseena moin and directed by Saira kazmi. It is basically the story of two sisters Zara and Sania played by Shehnaz Sheikh and Marina khan respectively. I will not discuss the whole story here but rather aspects which impressed me.

First of all the well-knitted plot. There are no loose ends, no extra characters, no stretched storylines. Infact this serial doesn’t show EACH AND EVERY SCENE. Whether it was the death or funeral of the girl’s parents or Sania going out with Vida’s cousin. In this era where each and every tragedy is exploited for commercial gain this comes as a huge relief. The serial Infact looks like a carefully shot home video then a drama. 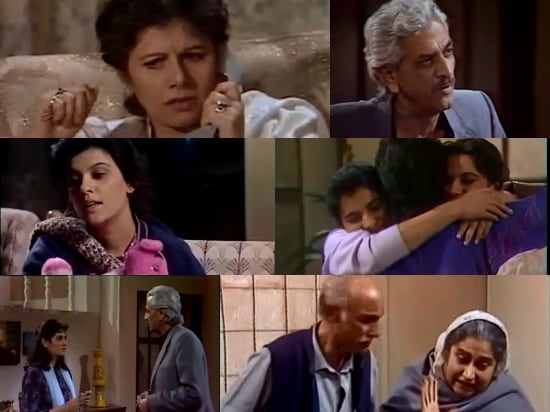 Second the Language. I fell in love with the way characters talked. Whether it was Farhan sahib ( Qazi Wajid), the witty dialogues of Husnat bhai (Late Jamshed Ansari) or The heroine Zara herself. These people talk in a mature way that shows we are listening to actual people talk in a normal way not in a dramatic style so popular in our dramas.

Third is the supporting cast and the interesting characters that they play. Whether it is the stingy Apa Begum giving charity when Zara had an accident to Zain’s fiancé Vida played brilliantly by Yasmin Ismail. In this era of jealousy. psychotic ex-fiancés and the infamous two women one man storyline can we imagine someone like her who is mature, confident and runs a business with Zara. She doesn’t sabotage Zara her Infact when she realizes that Zain has feelings for her she encourages him to accept them and moves on like a mature person unlike another Pakistani drama ‘cough Humsafar cough.’ 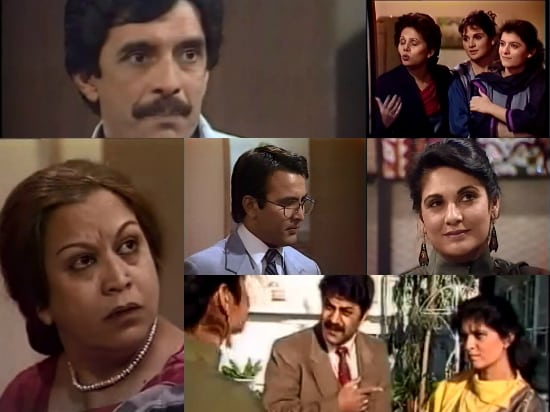 There is also Qazi Wajid who is simultaneously an easy going man and one who assumes the role of a father figure to the girls but doesn’t impose himself over them. The serial is notable for strong female characters The fiercely Independent Aani and the brilliant heroine Zara who is driven and wants to regain her house. She accepts a proposal according to her own choice and later throws Saad Salman’s ring when she sees his real face. Zain’s father is also a great character he who gives hope to others.

The costumes and sets are also appropriate. There is no overdo or bright makeup. Everybody dresses according to their character. The background score composed by Arshad Mahmud is also beautiful. Finally an interesting tidbit. The man who played the Girls lawyer is also the husband of their screen mother Sultana Zafar in real life. I recognized him from Sultana Zafar’s interview on VOA. I think it was fairly common those days many supporting actors were played by part-time actors as that gentleman had another job.

On behalf of all Pakistanis I would like to say ‘ Can we please make serials like these once more?’