This episode highlighted the double standards which are so rampant in our society that most often even women accept them as a norm and women are considered rebellious if they question them. This drama has a solid script, the writer made sure that the viewers were well acquainted with the characters and their circumstances before introducing the most important development in the story.

Tabbasum’s character has been etched-out brilliantly and the situations which led to the phone call to the police were covered convincingly. Tabbasum was already shown struggling with daily routine because she was expected to carry more burden than she could handle therefore when she heard Sajjad crack a joke about wanting another wife like her, she wasn’t very “understanding” or amused!! It is common for men to joke this way, so common that many of the jokes about married life usually revolve around second marriages and girlfriends but the fact is that a woman gets just as offended by such jokes as a man would! The writer put forward this important message aptly.

When Tabbasum said exactly what her husband did, all of a sudden his “ghairat” was at stake and he felt that he needed to do something to feel like he had an upper hand in this relationship and ended up doing something which he never even imagined he would do. He also didn’t expect that Tabbasum will do something so extreme to punish him. Tabbasum’s bhabhi’s role in this entire situation and the reactions of the people witnessing everything played a major role in making things worse. Sajjad has been constantly pressurized in the past 3 episodes as well to do something extreme to set his wife straight and this time around because his ego was hurt he succumbed to the pressure. One thing which doesn’t make a lot of sense is that if Bi Jaan can write accurately with a pen then why can’t she dial a number on the telephone or type a message? It is ironic how Bi Jaan is using the marker and board brought by her bahu to harm her in whichever way she can. Tabbasum gave her this board so that she won’t feel so frustrated and would have a way to vent out but this new mode of communication has been constantly used by Bi Jaan to show hatred for her bahu who does whatever she can to take care of her. On the other hand, she feels unconditional love for her son who won’t even leave a game of cricket match or lose his sleep to attend to his mother. Tabbasum’s reaction made perfect sense, her dialogues about why she felt she needed protection from her own husband were also spot on but Nadia Khan’s performance wasn’t as powerful as it should have been. Had she given a more powerful performance, these scenes could have been even more impactful. 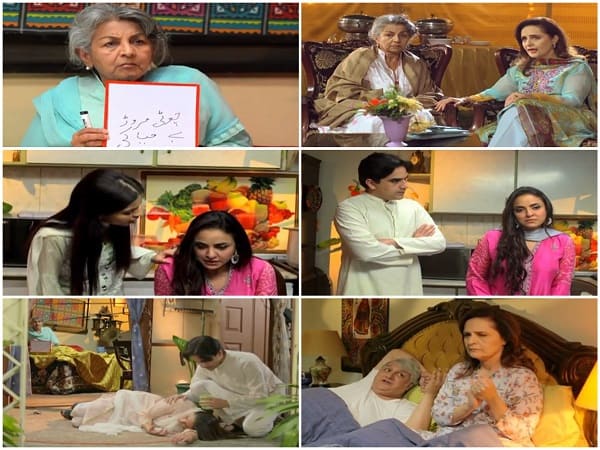 The reaction of the policeman who was incharge and the repercussions of this phone call were covered faultlessly. Since, this law is still new therefore every case is getting media attention, Tabbasum obviously didn’t see this coming, it remains to be seen what her course of action will be in the future. I think in the upcoming weeks we will see that passing a law in the parliament and making it work practically are two different things. Also, laws cannot change the way people think and at the end of the day any woman who goes to the police will eventually have to face a backlash from her family and the society. Omair Rana’s performance has been impressive throughout. Hina Bayat, Shamim Hilali, Aisha Gul and Khalid Anum’s realistic performances are the highlight of every episode. Nadia Khan however has failed to breathe life into her character. The only reason why Tabbasum’s character is easy to relate to is that it has been etched-out superbly and the director hasn’t over dramatized the important events.