Ohkay so, this episode further elaborated the kind of relationship Mehreen has with people around her. A more clear insight was given into her emotional & mental state. Mehreen is the kind of character you actually feel for because of how everything has always gone against her. In this pool of emotionally unavailable people, she has succeeded in finding a few gems who truly wish well for her & want to see her stable & happy.

In this family where everything is seemingly smooth, due to limited exposure & a high level of insecurities, everyone has made Mehreen a punching bag, an easy target because they know she is alone with no one to come to her support. With each passing day, their behavior, their attitude, their accusations break her into bits & pieces. Mehreen actually is alone, she has been alone since she was a young girl, therefore it is understandable why she puts up a brave face & keeps her emotions bottled up.

It is unfortunate that no one has once tried to understand her, which makes it harder for Mehreen to come clean about her feelings & thoughts that are running through her mind. One would expect a bit of kindness & gentleness from a grandmother but she too is aloof & distant. I will say that Shamim Hilali has performed this character brilliantly but it is turning out to be my least favorite character because she was or even is in a position to do something for Mehreen but she turns a blind eye & adds more to her woes!

Mehreen’s interaction with Saleha was refreshing because it showed how she at least had someone who believed in dealing with Mehreen with utmost kindness & respect. Saleha’s reactions showed that she too was sad seeing how much Mehreen was struggling. Although there was a brief moment where Mehreen tried to hide her emotions from Saleha, but she figured that out quickly. In this episode, one thing was further elaborated that Mehreen is stuck in the past, she is stuck in her childhood & there are bits & bobs of that phase that she keeps close to her heart. She has some level of affection for Rabia when she was solely her mother because she does remember her as a doting & loving parent. The span of 5 years in which Rabia did not come to see Mehreen, as well as Saleha, leaving for Kuwait makes one truly think what a little child must have been through, especially in a place where she was unwanted, where everyone resented her. 5 years is a long long time, especially for a young child who yearns for nothing but love. While interacting with Saleha, Mehreen sounded as if she wanted to reverse the time & go back to that life where everything was perfect, where she was happy. 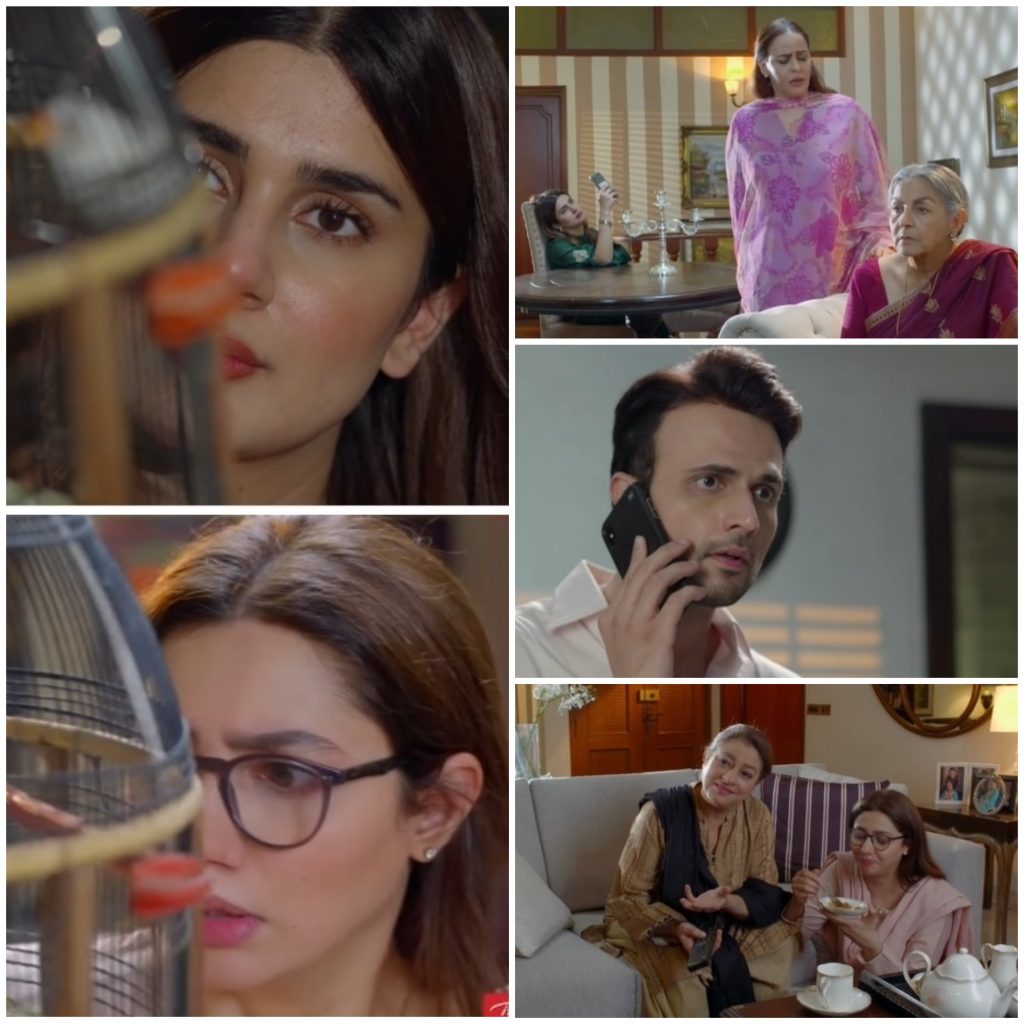 While watching this episode, I was thinking why Mashal couldn’t try winning Aswad over without putting Mehreen down but then I was reminded that this is all that she knew. This is her approach because she has seen how it might work in her favor. Mashal doesn’t know anything apart from putting Mehreen down therefore she finds it easy to make Mehreen a villain, in a hope that it makes her look good. Mashal has been lying to Aswad without fear of getting exposed because she knows that the two do not interact with each other at all. Those few scenes showcased how disturbed Mashal too is as a person, how twisted she is to come up with so many situations that deprive Mehreen of peace & happiness. Killing her bird, hiding her inhalers every now & then, & turning people against her all the time. Mashal too happens to be someone who needs help to snap out of this negativity that she has been garnering inside of her for almost all her life. The scene where Mashal reads Mehreen’s diary was heart-wrenching. Anyone would feel that way if they find out the hatred someone has in their heart against them but then why was Mashal surprised? She has never given Mehreen a reason to not feel that way about her, instead she added more fuel to the fire by doing all of this!

Aswad’s reaction while talking to Mehreen on the phone depicted how at a certain point in his life he had high regard for Mehreen, how he put her on a certain kind of pedestal & now when he was finding out the bitter truths about her, more than being disappointed he was frustrated. I liked how carefully Aswad picked his words & told Mehreen to stop wasting her life because as a well-wisher, this is all that he could say to her. I think so far, everything was pretty stagnant in Mehreen’s life, there was no relief, no channel for anything good to make its way to her but with Aswad soon coming to Pakistan, things will change for Mehreen drastically. Aswad will be the one who will become a mediator & more than that, he will assess Mehreen with his own sensibilities. He will form his own opinion & will try to make things work for her, something that no one else has tried to do before. I really wish Saleha had at least done something for Mehreen in this regard because like everyone around here knows, Mehreen has a great relationship with her aunt, therefore Saleha should’ve at least tried to change her mothers’ perspective of her.

This episode of Hum Kahan Ke Sachay Thay was brilliant & thoroughly gripping. I really enjoyed Mahira Khan’s performance as Mehreen, especially in all those scenes where she was trying to hide what was running through her mind. What I really like about Mehreen is that she is not afraid of standing up for herself. Although she snaps at everyone, which is deemed as badtameezi but it is interesting how Mehreen never tries to clarify or explain herself. It shows that she has given up on it because she knows no matter what she will say or do, her family members are always going to misunderstand her. This is exactly why she behaved with Aswad in a similar manner where instead of getting defensive, she let him think whatever he wanted to. I am happy there is a character like Shabo who brings in some comic relief to this drama.

I did however find some of Mashal’s dialogues & scenes a bit repetitive but I am glad things are about to change from the next episode. Kubra Khan is acting well too but I would like to see more from her. Nani’s dialogues especially about Mehreen’s father are also quite repetitive, it is as if she has nothing else to say. Another scene I found a little stretched was Mehreen unable to find her inhaler. For someone who suffers from asthma, having an inhaler in the bag is a must. She’s always seen looking for it in the drawers, but somehow when she knows this is something that happens with her quite often with Mashal taking it away from her, she should keep a backup at least. The episode was well-shot & directed. I really like the OST & the background music too, it adds depth to the emotions felt by the characters. Please share your thoughts about this episode of Hum Kahan Ke Sachay Thay.