Ohkay so, this episode was pretty slow & typical because it didn’t have much to offer & the things that unfolded had been there, seen that written all over them.

Aabro & Ali are facing difficulty in settling down, which I think is purely Ali’s fault because when he had no plan, he shouldn’t have taken such a huge step in the first place. Ali is turning out to be quite incompetent because he can’t even take care of himself so how is he going to fend for his wife? Ali thinks hopping from one friend’s place to another’s would help him but he isn’t even confiding in them, so why does he think they’d understand him when Ali is only going to lie to his ‘friends’? It is actually quite unconvincing that Ali doesn’t even have a single good friend that would help him at this hour of need. Also, I find it quite ridiculous that Aabro still hasn’t grasped the gravity of the situation that she’s in, with her husband. The moment she hears something against herself, she decides to leave that place, without even putting much thought or considering the idea of bringing a change in herself. Yes, she wanted to get married to Ali, so she got him, but now, she needs to show some understanding too. Honestly speaking, as far as Ali’s plan of eloping with Aabro was concerned, it seemed alright because people who’re in love tend to do that, but to see Ali as the eldest son of the house who seriously has no sense of responsibility makes me question his sanity. Ali seems more down & depressed than Aabro, as if he wasn’t ready for this kind of burden & challenges in his life, which is why now when he is facing them, he is finding it impossible to deal with them. 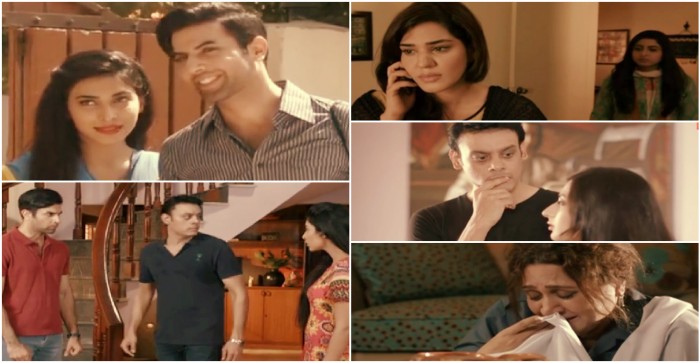 The argument that took place between Aabro & Ali regarding their families went to show how things are going to get quite difficult between them because Ali didn’t take a minute in making Aabro realize that she never respected her mother, so she shouldn’t be saying much anyways. She already has told Ali enough that she never had good relation with her family, so she shouldn’t expect him to show a tad bit of understanding as far as Aabro’s family is concerned.

Honestly speaking, I thought we’re living in the 21st century but Fauzia burst my bubble because she is stuck in the era where she weighs someone’s luck by considering the fact that they got married to the one they loved!?!?! Fauzia thinks Aabro is very very lucky because she has gotten married to Ali but Fauzia still thinks she has a chance & a single phone call to Aabro would turn things in her favor. Fauzia is turning out to be like a whiny kid that holds a grudge against that aunt who didn’t give her a candy. I so wish apart from eavesdropping, Fauzia had some more role to play in the drama because till now she seems useless & now she is also looking like a burden that others have to carry because she herself is so heavy that she can’t budge & can’t do anything to save her sorry self & life. Honestly speaking, I was getting ticked off with Fauzia, her character, her forlorn face & her sobs while she touched her empty ring finger. Seriously girl, pull yourself together & stop crying over a guy who, forget about love, didn’t even like you to begin with.

Just when I thought Ali’s father was the wisest of them all, he chose to make such an irrational decision that almost made me bang my head against the wall. Zafar thinks now that Ali refused to give Fauzia a piggy back ride for life, Abid should do the honors. Like seriously, why have they shown these parents to be so aloof & indifferent to their children’s needs & desires that they are making such irrational decisions on their behalf. All this while, Ali’s father rightly blamed Ali’s mother for everything that Ali put them through as he knew that Ali retaliated just because Zubaida chose to ignore what he wanted so it comes as a shock to me that Ali’s father hasn’t learnt his lesson & just like that, he thought Abid would get married to Fauzia? When Ali’s father was so considerate towards what Ali wanted, why is he turning his eyes away from Abid? Honestly speaking, I don’t think Fauzia is to die for that everyone is putting every logic, all the sanity & rationality aside to ease her pain & make her smile. 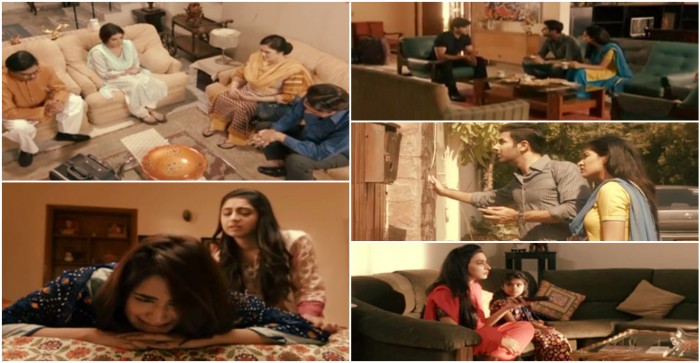 The only good thing that happened in this episode was Fauzia’s younger sister’s standing up against her parents because she made much more sense then these self-proclaimed wise parents. Also, I loved how she tried to knock some sense into Fauzia when she went on a blaming-Aabroo-spree that Ali is a newborn baby & Aabro has stolen him from his cradle. Shahida is again one of those alien mothers that none of us can relate to. First, she was perfectly fine with the idea of Fauzia becoming Ali’s Dusri Biwi & now, she seems totally sold at the idea of Fauzia’s marriage to Abid. Like these parents are human beings that experience & understand human emotions or are they zombies who don’t know what a human being goes through & the sort of emotions it feels? At least, it was good to see Fauzia’s sister standing up for her sister & ruling out the decision that these elders made because she made much more sense than these uncles & aunts combined. Also the way Shahida shooed her daughter away & looked sheepishly at her husband was so cringe-worthy, as if her plan was slipping away from her hands & she was trying hard to strengthen her grip!

Just when this episode was about to end, it hit me that they’re trying very hard to recreate Diyar-e-Dil here but it is turning out to be a commercialized copy of a classic drama. Just like Behroz & Ruhina, Ali & Aabro have eloped & have gotten married. Just like Suhaib & Arjumand, Abid & Fauzia are going to be forced into marrying each other. Just like Suhaib & Arjumand, Fauzia & Abid will live a good life & in the end, Ali will regret the decision of getting married to Aabro against his parent’s wishes just like Behroz & then in the end, may be Aabro will change & apologize for being herself, that too like Ruhina! The only difference in this drama is that Ali & Aabro are going to come back & live in Ali’s home which Behroz & Ruhina didn’t do. Things will be different then but the plot & the story line is just so similar & I so wish they hadn’t done that because their re-take on classic is totally…meh!!! Anyways, please share your thoughts about this episode of Aabro.