This episode just like the previous two wasn’t free of clichés but just like the preceding episodes it managed to hold my interest nevertheless. Having said that I must add that some dialogues should be officially barred from drama scripts. When I say that I am referring to dialogues like tum ne mere bete ko kya ghol ke pilaya hai…yeh lrki tumhari maa se ziada ahem ho gaye and many many more! I am sure that thousands of mothers utter these lines in real life as well but they have been overused in our dramas and some new one liners to get the message across would be a great help since I am pretty sure that our writers will continue writing scripts on these lines!

I must say that I wasn’t expecting Komal and Arsalan to get married but it happened and I am wondering where the story will go from here. It was good to see Komal taking off the ring and starting afresh. Although she kept on thinking about Wajdan right till the last minute but everything that happened in tonight’s episode went to show that she was going to start this new life with a new frame of mind. She wants to make this marriage work and she wants Arsalan’s mother to be happy with them both. Komal’s rationale for leaving Wajdaan made a lot of sense; given her history she wouldn’t want to be the one responsible for tearing a family apart but I wish history did not repeat itself in the exact same way and that part of the story was carried out differently. Arsalan showing up on Komal’s footstep in the exact same manner as Wajdan was a little too much of a coincidence. The only big difference was that this time Rayna was there to make Komal rethink her impulsive decision and keep her fiancé from leaving her forever. 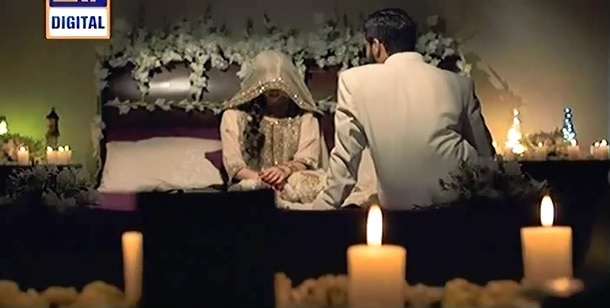 I was the one who was hoping that there would be more of present and less of past in this episode but I have to say that I wanted to see Wajdan in the present too. Tonight’s episode focused on the wedding and its aftermath alone. I guess the writer and the director want to keep us guessing whether Wajdan is married or not and if he has moved on with life. I felt for Arsalan today more than anyone else and I must say that whatever happened with him in tonight’s episode made me feel for all the men out there who must be stuck in such a situation! What does a man do when his mother judges him for loving his wife? Arsalan’s mother’s insecurities undoubtedly gave me the been-there-seen-that feeling but at the same time you can’t deny the fact that such mother in laws exist in abundance in reality too. 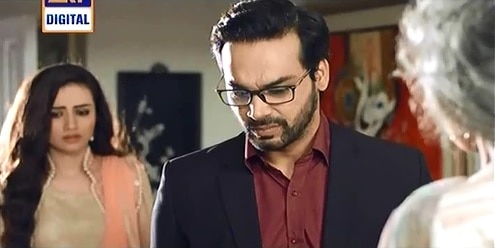 The first two days or so of Arsalan and Komal’s married life were covered nicely. Sana Javed doesn’t ever need to try very hard to convince the viewers of her character’s loyalty towards those she loves therefore I did not doubt Komal’s intentions for a second! But will her intentions and efforts prove to be fruitful? I seriously doubt that! Arsalan’s character is turning out to be very “normal” which is a nice change because I am sure just like me all the other viewers are sick and tired of watching husbands on screen who find it impossible to stand by their wives – well it is a tough job but not as tough as the husbands in our dramas make it look like! I sorely missed watching Imran Abbas in tonight’s episode and some of the dialogues really put me off, other than that I am still interested in finding out what is going to happen next. Aitraz has not been outstanding in any way till now but it manages to engage you and most importantly every episode gives you a reason to look forward to more.

Do share your thoughts about tonight’s episode and I would love to hear which dialogues you people think should be permanently banned from our dramas!