Wow, simply wow. This was an absolutely brilliant episode of Alif yet again & yes, it once again ended at such a moment where I was actually looking forward to how the conversation was going to carry on. The editors played a good game for sure. I can already feel the next week is going to be long because waiting for the very next episode is not going to be easy. Alif is a masterpiece, no matter how many times I will say it, I feel it will not be an emphasis enough because scripts, stories & dramas like Alif are a rarity in Pakistani drama world & I truly feel lucky to be able to see a drama like this. Direction, acting, dialogues, emotions, expressions, every single aspect of this drama touches your heart & it actually takes you to another world. Alif is a feeling & a beautiful one at that!

Different Side of Taha’s Personality:

Everything I said about Taha Abdul Ala in the previous review made me feel I was a bit quick to draw conclusions about him because I liked the side of his personality that was shown in this episode. Although Taha was fighting his own demons, it was actually nice to see him trying his very best to be a good & doting father to Qalb e Momin. Taha was guilt-stricken, but he was not oblivious to the deprivation Qalb e Momin felt. Taha knew that his son was just being a child, he had his demands, his wants, his needs, he was just asking for things a child is entitled to, therefore he seemed keen enough to do something in order to meet Momin’s demands. While watching these scenes of young Qalb e Momin, my mind was automatically drawn to the famous & wealthy Momin who was proud of what he had earned. A child who came from a humble background with no financial stability, where he hardly saw his wishes getting fulfilled, when he reached the age where he was able to achieve so much in such a short span of time, it gave him the confidence to an extent of arrogance that he was capable of getting everything he would want in his life. The best thing about Alif & the backstory is that everything is related & while watching every scene, you can easily figure out the purpose of why certain scenario is being highlighted. Momin’s demands of cookies, chocolates & cycle made it very easy to understand the reason behind Momin’s arrogance when he became successful & started doing well financially. 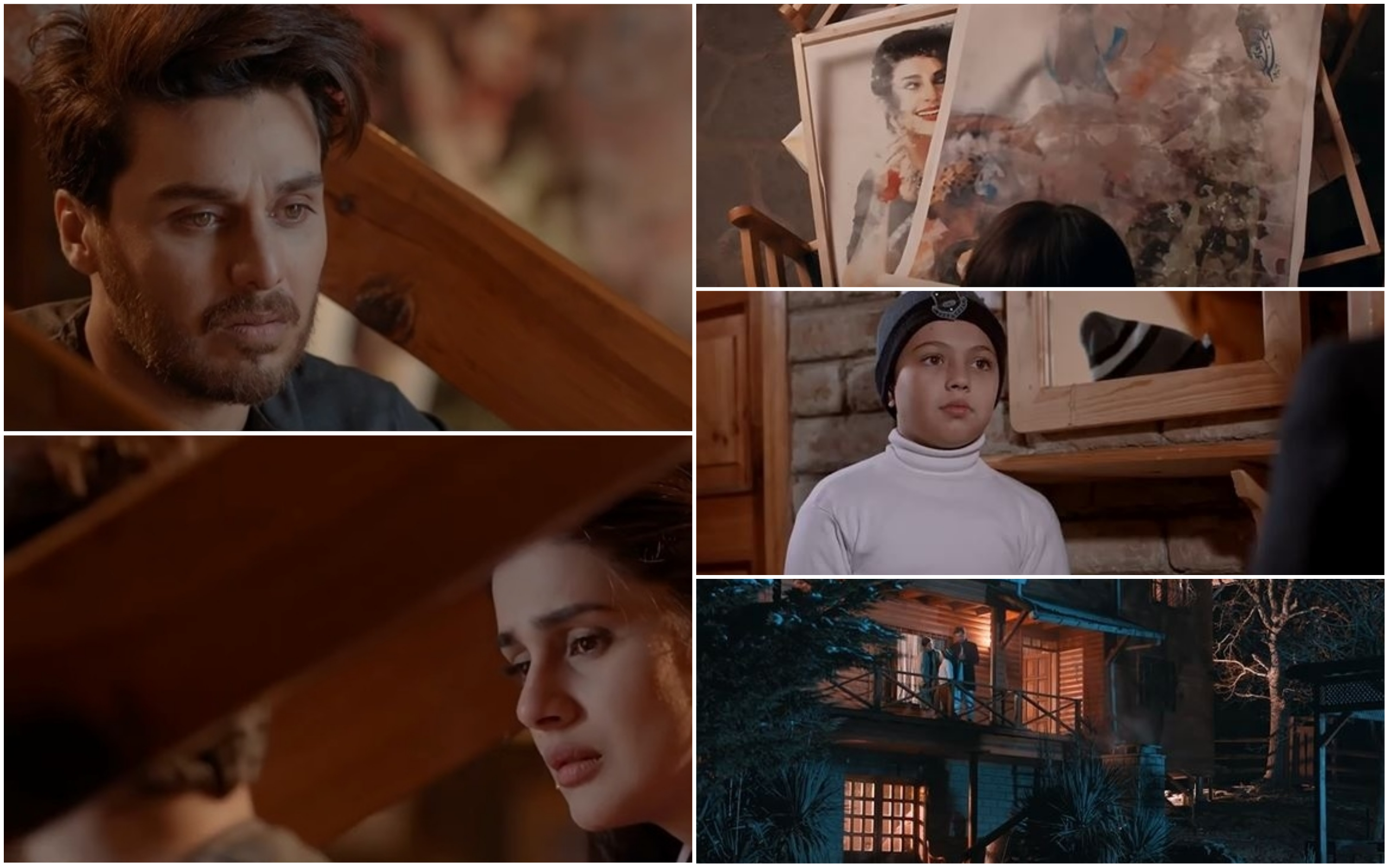 The conversation between Husn e Jahan & Taha was heart-touching. It was good to see him confiding in his wife, it ensured that he was not trying to escape the life he had chosen for himself, rather he was trying to find the solutions. Taha knew that everything he was experiencing was because his father chose not to forgive him, which meant he did not hold his wife or son responsible for what he was going through. Another beautiful conversation was between Taha & Qalb e Momin where he metaphorically explained who Husn e Jahan & Qalb e Momin were. It was beautiful & just through that, Husn e Jahan once again got a reminder of the storm that Taha was dealing with which was slowly killing him inside.

Momina did not have a hard time connecting the dots. She also did not have a hard time seeing her father differently because she could feel, Sultan’s feelings for Husn e Jahan were more than what he had expressed till date. She also wanted to know whether it was love or guilt or something else which Sultan felt for her. Momina was not gullible to fall for Sultan’s half-baked truth, she wanted to know everything & this is why she decided to go ahead & sign the film. This is not just a project for Momina, it has made her curious & she wants to know everything about Husn e Jahan because Sultan chose to keep his secret.

Well, let me just say, it was nice to see Momina & Momin in one frame once again. The tables have surely turned & now Qalb e Momin sat there with humility, uncertainty & zero arrogance, whereas Momina was self-assured, she knew what she was getting into, confident & sorted. This difference in their attitude was brilliantly portrayed by both Hamza Ali Abbasi & Sajal Aly. Even before they met, Qalb e Momin found it hard to believe that Momina had agreed to do this movie, it was like he was relying on her name & kind of felt relieved that he won’t be facing financial restraints to go ahead with the movie because Momina was a brand of her own. 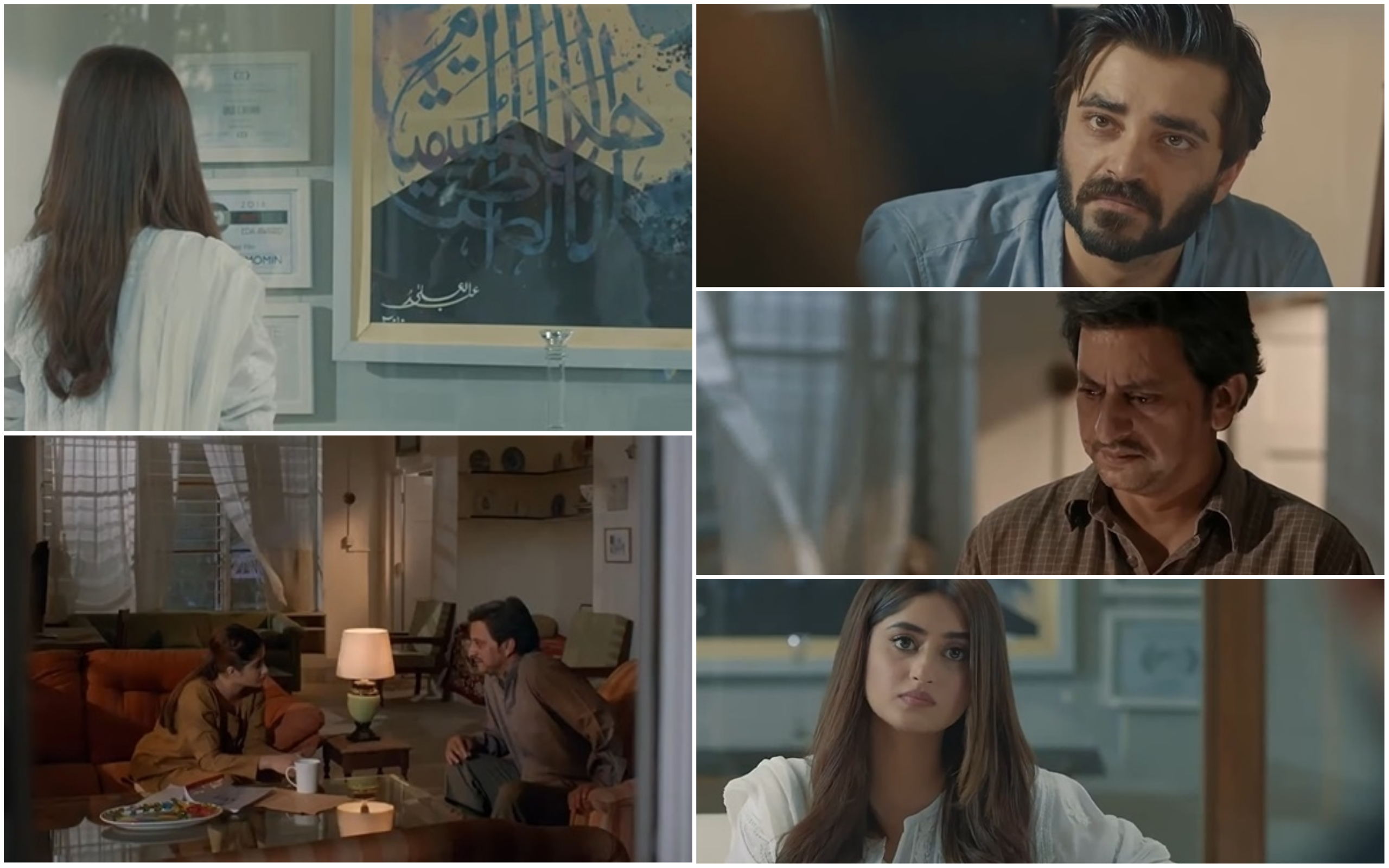 Momina wanted to know the truth but she knew it was not going to be easy to hear it from Momin. Momina saw him differently, she knew this was the story of his mother, the question in Momina’s eyes was so evident. She knew but she was unsure why he was hiding the truth. The deal that Qalb e Momin did not finalize was another brilliant moment of this episode. Mr. Khaliq was keen to get the paintings but then just listening to everything he had to say about the paintings & Abdul Ala’s art made Momin reconsider his decision. He wants finances for his movies more than ever, he is keen, he is eager but still, it showed that his love for his grandfather stands ahead of everything that he wishes for. It was nice to see Qalb e Momin in this light too, who wants to treasure his grandfather & cherish everything related to him more than ever before. Momina also got to see a different side of Qalb e Momin, while she sat there figuring out what was happening, she was stunned to see Abdul Ala’s paintings at Qalb e Momin’s place. Her demand to get the 7 paintings was something that neither Qalb e Momin nor I as a viewer saw coming & just when I wanted to see more, the episode ended, ah!

Overall, it was a beautiful episode of Alif. Simply beautiful. I am glad that the story has now come to a stage where both Qalb e Momin & Momina will be getting their answers. Qalb e Momin needs to learn more about his parents, especially his mother to let go of the grudge he holds against her & I can’t wait to see that happening in the episodes to come. Sajal Aly looked absolutely gorgeous when she walked into Qalb e Momin’s house for the meeting. Hamza Ali Abbasi has portrayed Momin’s restlessness & emotional turmoil to perfection. He is just not himself anymore after losing his grandfather & where in his professional life Momin is trying to get back to work, in his personal life he is shattered & slowly dealing with his pain of surviving without his only family that he had – Abdul Ala. Pehlaaj Hussain’s scenes are also a treat to watch, his innocence is endearing & the way he delivers his dialogue fills heart with so much warmth. He is a beautiful child. Ahsan Khan & Kubra Khan were right in their element as Taha & Husn e Jahan. Alif is a brilliantly directed drama, every single scene has so much to offer & has been curated with so much attention to detail that it not only completes the picture but makes everything look visually appealing as well. The preview of the next episode was promising & I can not wait. Please share your thoughts about this beautiful episode of Alif.