Ohkay so, this episode of Alif was different from all the previous episodes that we have seen so far. There were emotions but still, the way everything was conveyed is making me feel empty & there’s a void in my heart right now. I totally get that before showing how things will change in both Momin & Momina’s lives, they have given a detailed insight into their emotional & mental state, which is necessary. I am at a loss of words right now & I totally get why this episode was executed this way because now everything is about to change & we will experience the magic happening soon!

All of the scenes that covered Momina & her family’s mental & emotional state were done beautifully. They left me feeling overwhelmed & once again, each & every detail was executed brilliantly. Momina’s body language, her slouched shoulders, defeated gait, empty eyes & expressionless face depicted what was running through her mind. Momina is unable to feel any emotion because she has realized that everything that she felt & experienced was related to Jahangir. For so many years, Momina could not feel at peace & she could not put her mind to rest because the thought of healing & getting Jahangir treated dominated her life. Momina struggled & struggled because she knew that she had to do everything in her might to help her younger brother & because she got used to that kind of life, now with Jahangir gone, she is being forced to reform her life & she is finding it hard to do so. Momina is unable to decode what the purpose of her life is, when Jahangir was around, Momina despite beating herself up felt she had a purpose because she had the responsibility but now, she is completely lost. She has now started thinking about her parents, this way she gets to feed herself that she is still needed & she has a lot to do. Momina is dragging herself through this mayhem but yes, she is tired. 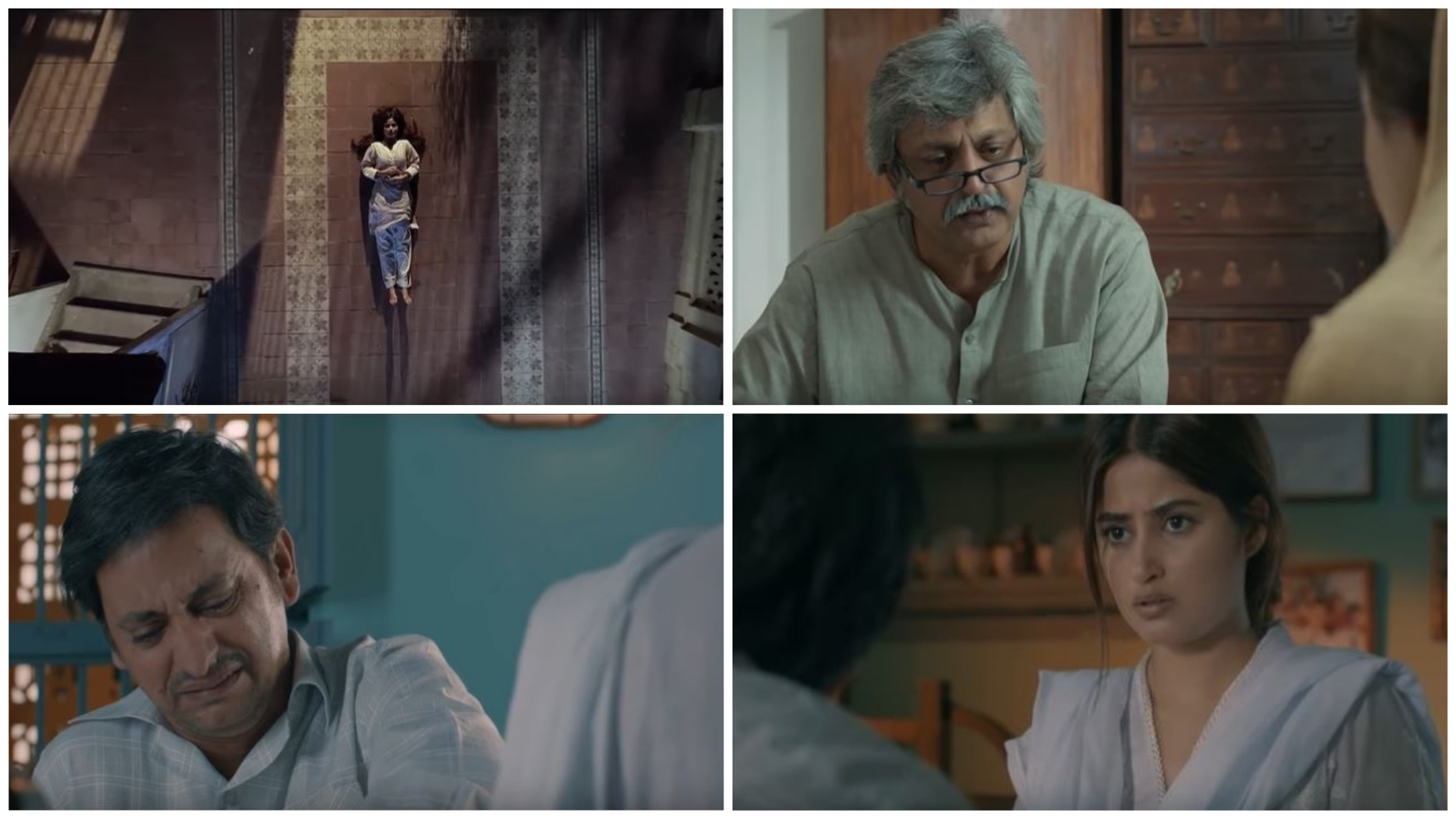 Momina tried to make things better for her parents, she decided to speak to them, get them back to normal but she failed. It makes me feel so much for her that Momina has dedicated her life to her family – everything that she feels is only related to them & while doing so, she has left herself somewhere far behind. Sultan related Jahangir’s death with the death of Husn e Jahan, he felt that the people he loved strongly passed away & that made him upset. At that moment Momina just walked away which showed that she realized that this was something that her father could not help – it was not in his control to not feel such emotions for Husn e Jahan.

Master Ibrahim & Momina’s conversation was beautiful & emotional. This was a very unique kind of catharsis for Momina, at least after hearing all those things from Master Ibrahim, Momina started thinking about her ‘rewards’. Momina has all this while felt a strong emotion for Faisal & she assumes if she’ll get to be with him, that will be her reward but she is mistaken – again a lesson that she will learn the hard way. I must say, the way Sajal Aly has elaborated all the emotions & feelings of Momina with such clarity & precision is absolutely commendable. Just by looking at her you know what she is going through, her minute expressions are actually a treat to watch because she gives away so much in such an effortless manner – this kind of portrayal of emotions is my absolute favorite & I am loving Sajal Aly’s performance as Momina.

Momin once again proved a point that he is Momin – the one who never forgives, the one who keeps grudges & never forgets. Momin humiliated Neha in front of the world whereas whatever Neha was doing was behind closed doors. She cheated quietly but Momin humiliated her publicly. Momin actually had strong emotions for Neha & that is why he was hurt but yes, he couldn’t let go off it so he thought of getting back at her. Momin actually underestimated Neha & because he is ruling the industry with his power & authority, he thought he could get away with everything & there was nothing that will ever get in his way. Neha is hurt & she wants to see Momin fail. As much as I totally feel that Momin has to taste failure in order to actually understand what real success is, I still think Neha is not in a position to be angry at Momin because she was the one who cheated on him in the first place. Momin didn’t cheat, therefore he’s in the clear!

Momin has landed himself in a scandal & with this, his life is in a downward spiral. Momin is definitely not ready but he will be faced with one situation after another which will make him question everything. Momin will be forced to reflect, introspect & he will only have a control on his life back when he will decide to change himself & this is the journey I am eager to experience. 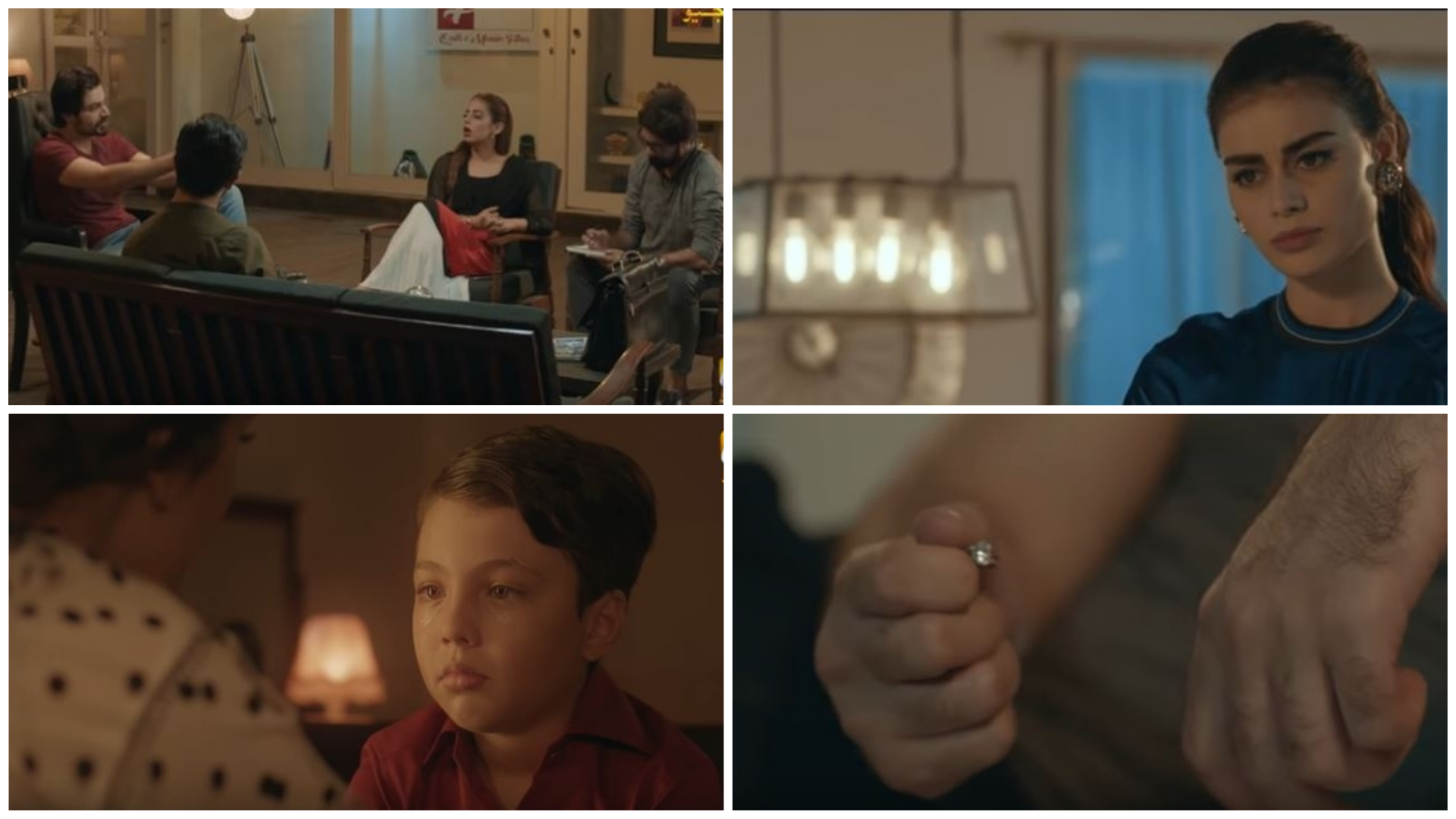 Momin is carrying a facade & no one has actually been able to understand or decipher that there’s a vulnerable, scared & scarred Momin behind this tough looking man who shows he is very much sorted emotionally. When I saw the scene of Husn e Jahan & young Momin, I could not help but feel sad for the little child who was getting to hear his mother’s confession. For a child, his first superheroes are his parents but Momin’s father showed him that he was a coward who ran away & his mother herself confessed that she was not an ideal parent for him & this is something that a child can’t even imagine. Young Momin was trying hard to figure out things at a very tender age & he found his mother admitting that she was a failure, even if she hadn’t said all of that, he was observant, he was wise for his age to actually see his mother dying a slow-death every single day. Momin hates the fact that everyone idealizes Husn e Jahan for her beauty, fame, success because he has seen her at her lowest, when she just yearned for love & togetherness of her husband, where her status, the love of her fans didn’t matter to her at all – what did was Taha’s affection & sadly, that was the only thing that she didn’t get.

Momin looking at his mother’s picture showed that behind such strong emotions, he was still a little child who missed his mother, who was upset at the sad life that she had lead. This goes to show that Momin has bottled up all these feelings for so long that he has actually forgotten why he feels this way. His time away in Turkey will allow him to untangle his thoughts, paint a clear picture & actually realize where does this anger actually come from & for what? Momin has a lot of sorting to do & it will be interesting to see him doing that.

Closing Thoughts – All Over The Place, In a Good Way:

Overall, this episode of Alif was interesting & I liked how it was all over the place because I can totally see that things are going to follow a sequence with Momina trying to take charge of her life & Momin being on a quest of finding himself & the ‘seedha rasta’ that Abdul Alla spoke about. Momin will find himself landing in trouble which will eventually lead him to realize how meaningless all these things are that he had been chasing most of his life. At this point I am actually looking forward to Momina & Momin’s meeting the most but I do like how things are being built up. I must say the background music in all the scenes is spot on because it plays such a huge role in making an impact & adding more meaning to the situation. The sad music used in the scene where Momina spoke about Jahangir with her friend added more emotion to it. Hamza Ali Abbasi has breathed life into Momin’s character – every expression, every emotion has been conveyed brilliantly. Momin is a very complex character & to portray it with such finesse shows Hamza Ali Abbasi’s calibre as an actor. Pehlaaj Hussain is brilliant & his presence adds a different layer of emotion in all of his scenes. Saleem Mairaj’s performance in this episode was outstanding, a father who lost his son & a fan who lost his idol, those emotions were jumbled up but were coming from the same place – a place of loss & heartbreak. Alif so far has been a well-directed, well-executed & brilliantly acted drama which has thought-provoking dialogues & such situations that strike a chord. I can not wait to see the rest of the journey. Please share your thoughts about this episode of Alif.