This episode was definitely much better than the last one. It was good to see Haadi’s mother realizing that she did not make such a wise decision after all! Farisa did not take very long to cash in on the wedding. Even a soft spoken and docile person like her Mami was forced to do something about the situation. Farisa might have successfully “stolen” Haya’s life just the way she always wished she could but she is learning slowly that some things cannot be “stolen”! She somehow managed to talk her Mami into making this marriage happen but did she even stop for a second to think if she knew a trick or two to make her “husband” fall in love with her too? Farisa planned everything really well, she even made sure that Haya never gets in touch with anyone in the house and now that everything is not going according to her plans she feels frustrated and angry. Farisa’s conversation with her mother showed that she cared about nothing else except the money, the only reason she even wants Haadi around is so that he cannot be with Haya otherwise it is quite obvious that she has no feelings for Haadi. I must say that Sara Khan has been totally flawless as Farisa. You can’t help but hate Farisa for getting away with everything but at the same time you feel for her too. She was naive enough to think that this marriage would ensure a happy ending but this actually is the start of a very trying period for her too. Even though Farisa is Haadi’s wife but she can never have the kind of connection with him which Haya has.

For the first time I don’t see myself feeling sorry for the wife while the husband does everything in his power to annoy her! Yes, Haadi should have been man enough to put his foot down when his parents asked him to marry Farisa but even if he didn’t do that, this marriage was definitely Farisa’s brain child more than anyone else’s. Farisa wanted the money and she got it! I could totally relate to Haadi’s desire to spend time with Haya but at the same time I thought that he was being very selfish because he has been ignoring Haya’s feelings for him on purpose. If he accepts the fact that what Haya feels for him is real then they cannot be friends any more and he just does not want that. It looked like Haadi had moved on but the scene in which he could not even carry the baby to comfort him when he was crying went to show that he had not moved on at all. Haadi still blamed himself for Aroosa’s death and he still thought that Aroosa would still be with him if this baby was not in the picture or perhaps the baby is like a cruel reminder of how his wife died. I would have liked to see a flashback or two in which Haadi remembered Aroosa in some way but even without the flashbacks such subtle hints were evidence enough that Haadi was still trying to move on. 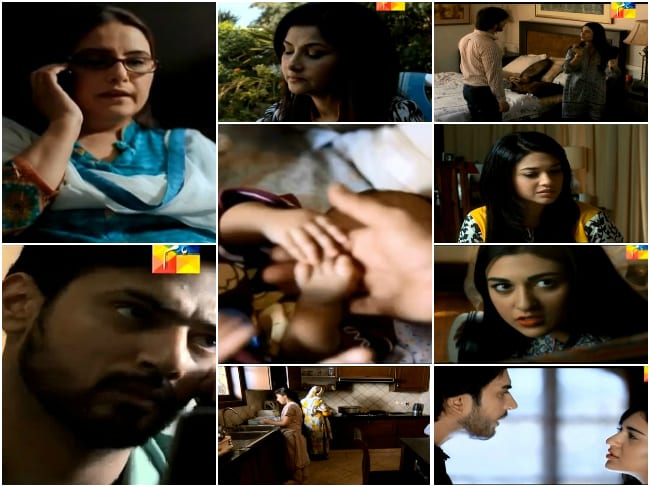 Haya had the opportunity to tell Haadi that Farisa had her contact number all along and that she kept them separate on purpose but she did not do that which is something that was completely in line with her character. Telling Haadi anything like that could have meant an end to their marriage and Haya would never want that. Farisa thinks that Haya wants to marry Haadi because she is the sort of person who would wreck someone’s house for her own happiness but Haya finds it impossible to come into terms with Farisa’s negativity because she is not that kind of a person. It would’ve been nice to see Haya threatening Farisa too when she threatened her because the things Haya has said to Farisa are nothing compared to what Farisa has done to Haadi.

Ramiz has moved to Karachi and Haya is definitely getting closer to him although she thinks of him as nothing more than a friend. Haya also feels that Haadi is cheating on Aroosa by not giving his son the love he deserves and by moving on so easily which might be the reason why Haya might decide to get away from Haadi too in the future. Haya keeps on bringing Aroosa in the conversations with Haadi perhaps because she does not want to forget that Haadi was madly in love with and married to her sister. I must say that I could see the Haya I really liked in the first few episodes in this episode. Farisa might not be the least bit likeable but she is keeping things interesting for now. Next episode’s preview shows that Farisa will be looking for Haadi’s affection, asking him to talk to her most probably because he loves talking to Haya!

This latest installment definitely gave me something to look forward to and although like many other people out there I don’t enjoy watching two girls fight over a man either but tonight wasn’t really like that at all. Haya is not the kind of girl who will go after someone’s husband which means that she will move on and out of Haadi’s life at some point. I like the way Haya’s character is developing and Sanam Jung was absolutely brilliant throughout this episode.

Do share your thoughts about this episode of Alvida.