Farisa’s loyalties completely changed after witnessing first hand just how rich Haadi’s father actually is! Haadi has gone from being Haadi Bhai to Haadi, something which Saim noticed right away. Farisa is willing to skip her semester and has “camped” at Haadi’s house because she can see that there is a way for her to make a place in that house. I must say that I am surprised that Farisa did not think on these lines instantly after Aroosa’s death. We saw Aroosa getting annoyed with the responsibility of taking care of the baby in the last episode and it was only after operating the locker that she decided that she had to get married to Haadi in order to have the “bright” future she always dreamed of. Haya was the biggest hurdle in her way after Aroosa’s death and now that she is not around this was a perfect opportunity for Farisa to make her way into Haadi’s house, Farisa always knew just how rich Haadi’s father was therefore I am surprised that the idea only clicked with her when she opened the locker. It was good to see Haadi’s mother volunteering to take care of the baby because she realized that Farisa had to give her attention to her studies. Farisa does not want to wait for Saim to get rich especially now when she knows that Haadi is “available” and the opportunity couldn’t have been more perfect. 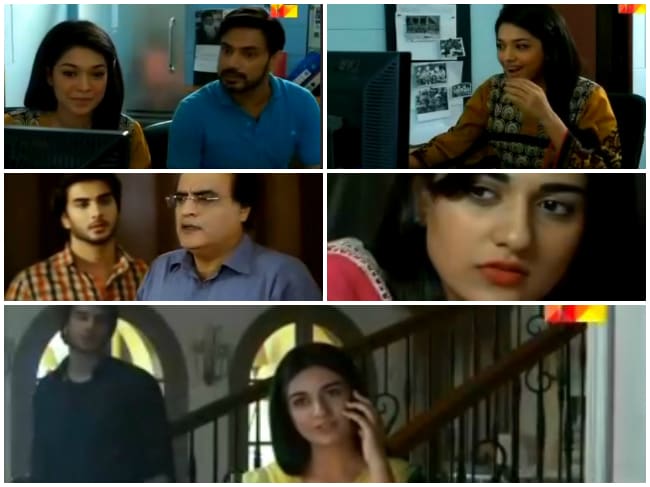 This drama shows what a big part fate plays in our lives and I find the turn of events especially in Haadi and Farisa’s lives quite convincing as well. Haya’s track was much more interesting in tonight’s episode but I must admit that I am finding it awfully hard to believe that Haya’s Taya is okay with Haya being away from home for so long without any trace. I understand that the situation is not in his control but the fact that he is not worrying sick about Haya is very hard to digest. I wish we would have seen him showing his concern about Haya for a few seconds in every episode to make the situation more relatable. Haadi’s feelings on the other hand are easy to relate to. He missed Haya and is desperate to find her but he is unlucky because he has started trusting Farisa. Haadi thinks that Farisa will help him find Haya and Haya thinks that Farisa wants nothing but the best for her. The fact that Farisa did not even inform Haya about Aroosa’s death went to show just how desperate and selfish she is. Is Haya really living with one of her distant relatives or did she just say that to Ramiz because she didn’t want to tell him that she is living in the hostel? The way Ramiz and Haya’s track has been covered is very convincing. Haya is gradually warming up to Ramiz and Ramiz seems like someone who will not give up easily. Ramiz’s dialogue ” you’re the first and I also hope you’re the last ” went to show that he wants a future with Haya but it seems most unlikely at the moment. Haya’s loneliness however will probably be the main reason for her to get closer to Ramiz. The scene at the office when Haya’s reacts after checking her result online was one of my favorite scenes from tonight’s episode. Haya was in a situation where she needed to share her happiness with someone and Ramiz knew that only too well. Whatever information we got about Ramiz’s family tonight showed that Haya has much in common with him, both of them did not really have a real family to call their own – or at least they thought so. Haya’s guilt pangs and memories of time spent with Haadi were a very good addition to tonight’s episode as well. 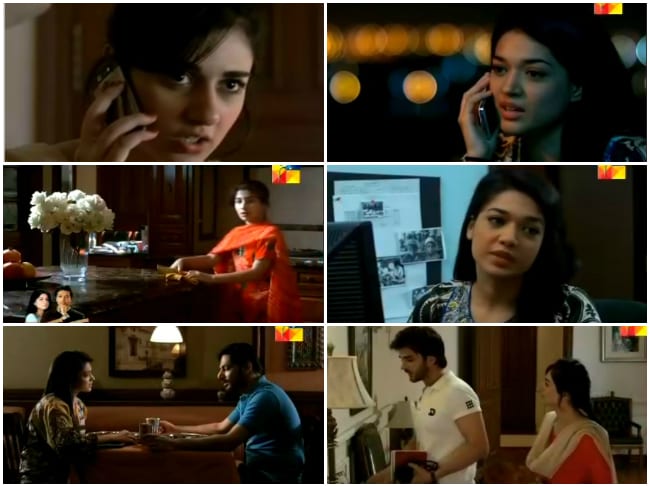 The way Haadi reacted to Farisa’s declaration of love was also shown really well; I would give full marks to all the people involved for making all these scenes a complete success – the writer, director and the actors. Also, the manner in which Haadi showed his indifference towards whatever Farisa said to Saim showed he just did not care about Farisa at all. The conversation afterwards in which Farisa asks him to talk to him because she did not have anyone to talk was very nicely written too; it reflected Farisa’s desperation and Haadi’s lack of interest really well.

I love the way the director has used white to enhance the beauty of different scenes. The white flowers and candles stood out on the night of Aroosa and Haadi’s wedding and tonight too they looked beautiful in the scene when Saim visits Farisa.

I must say that Sara Khan has come a long way, she was absolutely flawless as Farisa today. Imran Abbas and Sanam Jung have been brilliant throughout the drama too therefore I am expecting nothing but the best from them. Zahid Ahmed has portrayed Ramiz’s character really well, it would have been so much better if we didn’t know what was coming ahead because so far Ramiz comes across as a nice person. I must give the director credit for keeping the scenes short and to the point and I have to say that until now the script has been written very well too. I thoroughly enjoyed all the conversations in tonight’s episode, they made me relate to the situations and the characters. I just wish that Haya’s Taya would worry about her more often!