Many important questions were answered tonight and although the story overall is interesting, there were some developments in this episode which are difficult to relate to. The person incharge of choosing the cast did a splendid job since all the actors are well-suited for their roles but there are times when you feel like some of the characters haven’t been explored properly. The director Saife Hasan has executed every single horror scene perfectly which is why the horror element of this play never disappoints.

Rameez’s friend doesn’t only have knowledge about supernatural beings but is also very determined to solve this mystery – more determined than the residents of the house! This aspect of the story and Rameez’s attitude in particular tonight was the most unconvincing element of this track. Even after witnessing the terrible way in which his son was tortured by the spirit which had taken over Tasha, he remained unconvinced and still believed that Tasha had a mental illness! The identities of the spirits were revealed tonight and their back story was also shown. Neelo is Aziz Sahib’s step-sister who he always called a dayan and never got along with. Her mother Salima even after her death is still playing the role she was playing when she was alive – protecting her children. Although Neelo was Salima’s step daughter but she always loved her like her own which is why even now she listens to her. The back story gave a logical reason why Neelo came back to disrupt the peace in Aziz’s life and why she wants him to leave the house. The actor who played young Aziz’s role had a striking resemblance with the present day character which was truly brilliant. 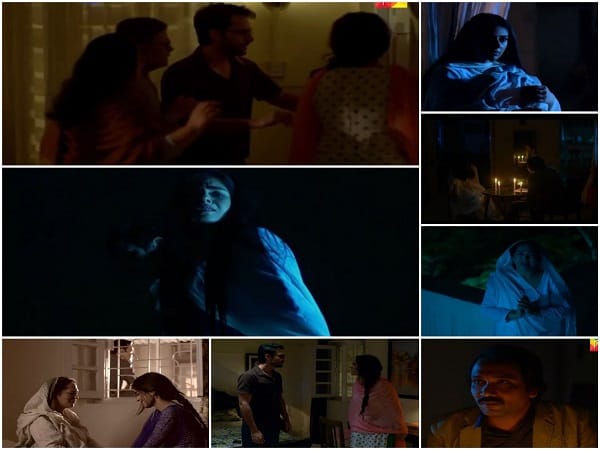 The dayan and everything she does is scary without a doubt but after watching her as a living, breathing human tonight, you can’t help feeling for her. Until now, I always thought that Aziz was the victim in the story but it turns out that was not the case. I must say that for now the story of the supernatural beings is more interesting than that of the actual family because there are plenty of times when it isn’t easy relating to their reactions. After Aziz’s encounter with Neelo’s spirit tonight, he should be able to make a decision based on facts. So far, the women in the house are the only ones who are convinced that Tasha needs help from someone who can get rid of this spirit but the men have always been shown trying to find a more “logical” reason for everything even after everything they have seen.

The best part of this drama so far is the way it has been directed and acted out; the horror scenes in particular are always right on point. If this drama aired twice a week, it would have been even more enticing. All the scenes which covered how Tasha behaved when she was possessed by Neelo’s spirit was the highlight of this episode. Neelo and Salima’s story is heart warming and I am certain that there is more to it! The script has a few loopholes but it holds your interest and keeps you coming back for more.