Ohkay so, this episode of Cheekh was superbly directed. It focused more on everyone’s reactions as well as Mannat’s anguish when she felt being all alone with such a huge secret. So far the direction of Cheekh is playing a huge role in making it such an interesting watch because all of the scenes are perfectly approached & fabricated. So far everything has remained precise & to the point, which I again say that I hope it stays that way.

No One Believes Mannat:

Probably the most heart-breaking reaction that I found was of Mannat’s mother after she left. Yes, everything that she said to Mannat was only to talk her out of whatever plan was brewing in her mind because as a widow with an experience of how cruel the world for a single woman can be, she didn’t want Mannat to do anything that would put her marital life in shambles. Mannat’s mother knows what her daughter is going through, she knows that Mannat is restless & she won’t be at peace for the rest of her life. She wants to stand by her daughter, be her strength & support system but she chose not to because being a mother, she wants to protect her child. I know whatever she said was not what Mannat wanted to hear & it left her confused even more but I loved her perspective as a mother who wanted to save her child. Mannat’s mother put up a facade in front of her & told her to be selfish but after Mannat left, she broke down because despite wanting to, she was unable to help her child who was feeling lost & she felt guilty because she knew this wasn’t enough for Mannat & this is not what she wanted.

Wajih’s attitude changed completely, it was like he was at peace after sharing his dirty secret with Mannat. It seemed Wajih kind of extracted pleasure from Mannat’s misery because he was so sure that she won’t be able to harm him. Wajih has started to work on his own plan too, which is to buy every single person & his loyalty. Wajih visited Amir & bought him & he tried to do that with Nayab’s family too. In those limited interactions, Wajih did gather that Shamsa was greedy & that is why he tried to convince her so that she stops Ramzan from pursuing the case against Wajih. 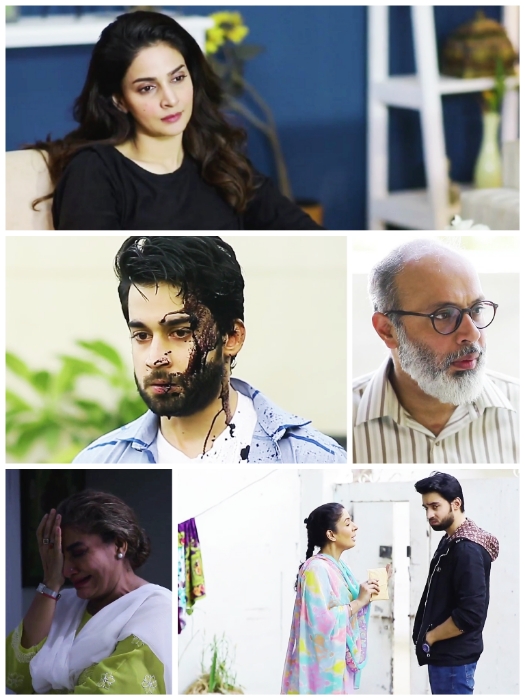 As expected, no one actually believed Mannat when she told them about Wajih’s confession. Haya didn’t believe her & Shayan chose not to listen to her. Yawar had an idea & he was just trying to protect Wajih but even he was not sure that is why he waited to hear everything from Wajih. It was so shocking hearing Wajih giving justifications for what he did & the best he could come up with was the fact that he became angry at how Nayab rejected him. Wajih is definitely disturbed because any sane or normal human being would stutter while confessing his crimes but he didn’t. Wajih has this undeniable confidence in himself & that only comes to him because of the power & authority he has. Wajih thinks no one will be able to harm him because he is strong & has a lot of financial backing.

I loved Mannat’s expressions when she saw Wajih after what Ramzan did to him. It was like she kind of felt some sort of satisfaction that Wajih was humiliated. Mannat has this storm brewing inside her & she is just mustering up this courage to channel it out. Right now, Mannat was just analysing everything, she was actually studying Wajih’s attitude, she was trying to figure out whether he was sorry for what he did or not but every single time, she only learnt that Wajih was not sorry & in fact he was now making a joke out of Nayab’s death. Mannat hasn’t made up her mind as of now like she doesn’t know what she wants to do but it’s just a matter of time because the moment that happens, would be the day Wajih will go behind bars. Totally waiting to see that happening!

Overall, this episode was intelligently executed too. I loved watching this episode of Cheekh. Even though not much happened this time around but it was established that in this fight for justice, Mannat will be left alone & she will probably have a handful of supporters because everyone will either be on Wajih’s side or choose not to believe the truth. Saba Qamar has nailed the character of Mannat. Every single expression, her body language, everything elaborated the pain Mannat was suffering from after finding out the truth about Nayab’s tragic death. Bilal Abbas Khan was superb as arrogant Wajih who thought he had everything under control. It was shocking to see him casually joking about Nayab, I am sure because of his convincing acting, Bilal Abbas Khan will make people hate Wajih for a long long time. Noor ul Hassan has performed brilliantly as a heartbroken father of Nayab too but because there’s so much crying that he has to do, I find it hard to understand his dialogues most of the times. The rest of the supporting characters are doing their job well. The director deserves a special mention for directing Cheekh impressively so far. Loving the OST too. Please share your thoughts about this episode of Cheekh.