Numair aur Manal tu aise ghayeb huve jaise ghade ke sur se seengh!! Seriously how can these two simply disappear like this? I must say that while watching tonight’s episode I couldn’t help but wonder if Syed Jibran and Arjumand Rahim were enjoying their “vacation/break” from a drama in which they were playing major roles. Did any of these actors except Sajjal Ali sign a contract for the entire drama? Three characters have died, two are totally missing in action and we are supposed to be content with all these new tracks and perhaps forget Rameen’s past altogether! I wish forgetting where the story started from and where it was going was as easy for me as it is for Rameen and for the writer of course!

Once again I had a very difficult time relating to Rameen’s character. She was full of advices for everyone else but was stupid enough to get hold of a gun and sone pe suhaga was Shiraz’s reaction to the whole situation. He is obviously very well connected and fearless but with three children in the house you cannot just sit back and monitor the activities of someone who could potentially be a threat to your kids. Rameen’s concern for Shiraz’s children was totally in line with her character since she loves protecting others even though most often she cannot protect herself but the way Shiraz’s mother fell in love with Rameen was something that simply does not happen!

When Rameen realized what a big shot Shiraz was I found her reaction hilarious. I hate to repeat myself but sometimes Rameen seems like a mature person (especially when advising others) but at other times she acts like a nine year old! Rameen helped Shiraz understand his daughter and seems to be the guardian angel which Shiraz and his kids needed in their lives. Yes I agree these two people need each other, Shiraz can give Rameen the security she needs and Rameen can be a nanny to his children – I really hope that things don’t go beyond that because somehow I am not warming up to the idea of this man with three kids getting married to a kid!

When I started watching Chup Raho, I thought that this drama was going to focus on the psychological impact of rape more than anything else. We have been watching Rameen fight a battle right from day one, there is no denying that but we hardly got a chance to feel for Rameen’s character the way we could have had if the focus really was on showing how difficult it is for a rape victim to cope not only because of external pressures but also because of the war such a victim has to fight with her own self. Most of us have been watching this play not to see a happy ending for Rameen but to watch Numair pay for ruining Rameen’s life but Numair’s character has vanished into thin air. It will hopefully reappear at some point but I feel that the story which wasn’t very focused to begin with has totally gone off-track. Is it really this easy for a rape victim who has not only been molested but also tortured in more ways than one to move on? I most certainly do not think so! Even the strongest of women are shaken after such incidents but the strength that Rameen has been showing is nothing less than a superpower. Can we please end this drama already? I did not watch the preview of the next episode – will we be seeing Numair and Manal anytime soon or not? I guess not because according to ARY Chup Raho’s rating is the reality that make all the difference!! 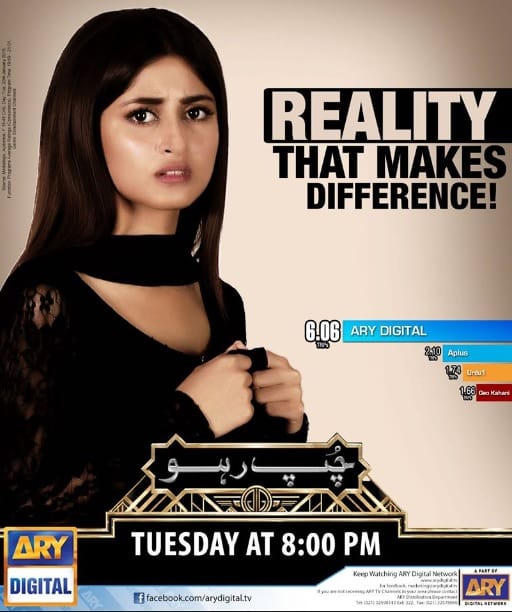