Shiraz aik “kamina” mard hai aur “Azar character ka bura nahi hai”! No! I am not saying that but these words of wisdom were uttered by our heroine when she told Shiraz off for letting Numair use his apartment for molesting girls. So basically Rameen would much rather trust and stay with the person who raped her then put her trust in Shiraz who might have given Numair the keys to his apartment many months back but did nothing to harm Rameen when she stayed at his house. Rameen thinks she is better off with Azar because he might be a coward but he is not characterless!! Rameen needs a wake-up call! I am beyond disappointed in her character. The main protagonist who could have played a very important role in telling the story of rape victims and could also have been the ray of hope for girls who have been molested by providing them some kind of an inspiration has been reduced to this pathetic character who does not even think before acting. The fact that Rameen was looking for another sahara was bad enough, things are even worse now because she is once again putting her trust in Manal and Numair.

I was speechless when I saw Manal’s reaction on finding out that the apartment Numair took the girls to belonged to Shiraz. That scene proved two things; one that Manal knows that Numair is a rapist and second that Manal is even more dumb than we imagined she was!! The sad part is that both these women are educated and very well aware of how they are being exploited yet they find it impossible to make one phone call to the police and get this man behind bars. On the other hand both these women are like puppets who dance to whatever tunes Numair plays. Manal’s dialogue “Numair ka dost hai Numair jesa hi go ga na” was another “masterpiece”!!

Rameen ne Saeein Ji ka dil tor diya…..I find it very hard to relate to the way Rameen is constantly compared to Shiraz’s dead wife. The woman probably spent more than 10 years of her life with this man and Rameen hardly spent some months with them yet somehow she is supposed to be equally important! Someone please tell Shiraz to find his kids a good nanny – I am sure he can afford one or even two!!

This drama has innumerable flaws but the biggest flaw in this drama is that most of the problems which almost all the characters have are self-created. Rameen can easily move to a shelter but she would much rather not! Shiraz can hire two maids for his kids, pay them well and I am sure they will as happy as a hippo! Manal should leave Numair and half of her troubles will be over! But the sad fact is that somehow these women are convinced that even if your man is a rapist or someone who has abused you without end in the past he deserved to be forgiven like nothing ever happened. I always had a problem with the men in this drama being obsessed with holding Rameen every time they talk to her but it is simply illogical the way Rameen lets Numair touch her even now and Manal stands by and watches while he is at it! This episode had a lot of unnecessarily long conversations – a good example of a lot of talking and very little story development.

The preview of the next episode showed that the drama is not ending any time soon. Rameen will get flowers from “Azar” but somehow she will not talk to him therefore she will not find out that he is dead! ARY claims that Chup Raho is the most watched drama of 2015 – kya khayal hai aap ka is bare mein;) 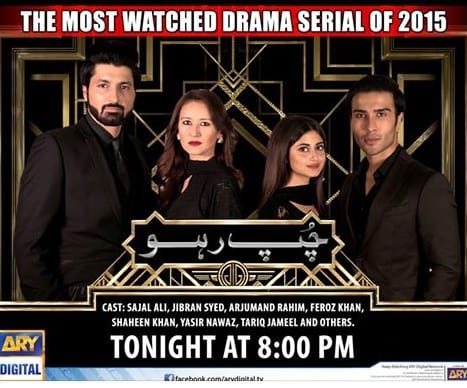