Ohkay so, this episode of Dil Mom Ka Diya was mind-numbing, not because of what actually happened with the main characters but because of the way the supporting characters acted & reacted. They all are in dire need of a life I feel!

Supporting Actors AKA Over Actors:

Ulfat was adamant that she had to part ways with Afzal & she kept on trying. Ulfat could see that Afzal was still not losing his patience & wanted to make things work but just because she didn’t want to, she kept on pushing all the wrong buttons. First meeting Salma’s husband & then creating an issue at Afzal’s office guaranteed her a divorce & she finally got one. I must say for the first time we got to see how a proper divorce takes place where there is still a chance of reconciliation so props to the writer for showing the true picture!

Everyone around Ulfat wanted her to get back with Afzal but she just didn’t want to. For the first time after seeing her reactions, I felt that the writer will give her such an ending where she will either lose her sanity or perhaps end her life. These are the only two possible endings that I can see Ulfat’s character will meet, let’s see. 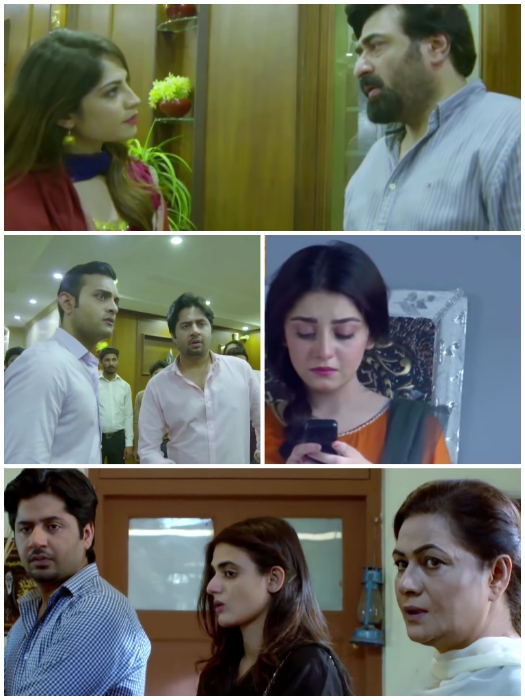 Well well well, now coming onto the side characters. I am sure the actor playing the role of Aqmal must have demanded some scenes where he could show his acting skills that is why he over-reacted so much that firstly, I laughed out loud & secondly, actually wondered if divorce was such a hugeee deal that could evoke such a reaction from a grown up chota bhai of the one who actually got divorced? Aqmal was never fond of Ulfat so I guess he should have controlled himself & expressed relief that finally an evil woman was out of Afzal’s life but oh boy, all that crying, screaming & in the end pointing a gun at someone because of a single loose comment was just too irrational & unrealistic. I mean Afzal was healthy & fine, it wasn’t as if Ulfat killed him for Aqmal to react that way. Well, that was his moment of glory as he got to act because till now he was just a ghost character hovering in the background for the most part!

Now coming onto another psychotic & super annoying character – Salma. Yes, she was also not fond of Ulfat but to misbehave with Tamkinat & assume that she was the same as Ulfat was just so pathetic. If I remember correctly, it was Salma who approved Ulfat based on her looks & she was pretty rigid in finding her over-aged brother a super young beautiful bride so she got one so why was she overreacting to such an extent that she even wanted Tamkinat out of Azhar’s life!!! She got what she deserved as she had such shallow standards & parameters set for Afzal’s dulhan so?  Thank God Kausar made sense & spoke wisely where she didn’t want anyone to hold Tamkinat accountable for Ulfat’s actions!

Moving onto Azhar, to be honest, as much as he loves Tamkinat, I feel she’d be better off with someone else, someone who at least sees her for who she is & not put her under scrutiny for someone else’s deeds. It seems as if both Tamkinat & Azhar didn’t have anything else in their lives than a tag of being associated with Afzal & Ulfat that apart from their relationship, they both didn’t have anything of their own!?!?! Azhar can just stop & do his own thing because he surely doesn’t deserve Tamkinat especially how he has treated her because of whatever Ulfat has said or done time & again!?!?!

Also, direction to kamal ki hai. In the last episode when Molvi Sahab passed away, Farhat’s mum in law was some other lady who told her daughter to leave with her but she changed in this episode!?!?! Anyways, whatever Ulfat did cast a shadow on Farhat’s life too & I could understand her incassant tears, since she was desperate to get married. Oh well, this episode had a truckload of tears to an extent that every time I saw Tamkinat clinging with her Chachi or Farhat & being their partner in crying, I found myself giggling at their forced misery!

Chalo, now that Ulfat is out of Afzal’s life, I think she will drag Tamkinat out of Azhar’s life too but then again, I won’t hold her responsible for Azhar’s actions because he is not a toddler who can’t make his own decisions. I hope in the upcoming episodes, these side characters take a step back & don’t overreact so much, especially Aqmal, overacting ki dukan. Please share your thoughts about this episode of Dil Mom Ka Diya.