Ohkay so, this episode of Dil Mom Ka Diya took the story forward & was executed nicely. The characters in this drama seem far more real & even though we may not agree with how they are reacting over a certain situation, the fact does remain that people when put under pressure do react irrationally at times.

Salma finally convinced Afzal that he should get married again only for the sake of his children. Obviously Afzal could not say no to Salma because once she makes up her mind, she pesters till the moment the other person gives up. Afzal got married to Fatima & she got to know clearly that she has only come in Afzal’s life to take care of his kids.

Tamkinat went back to Hyderabad & Azhar left too. I think they will be reunited because their chapter hasn’t had a proper closure yet & they do have a chance of getting back together but for now, they have moved on their own paths which again is something I find quite ridiculous because Azhar saw that Afzal remarried so not sure why he wasn’t ready to come out of that depression & just be normal with Tamkinat by forgetting that she was Ulfat’s cousin! 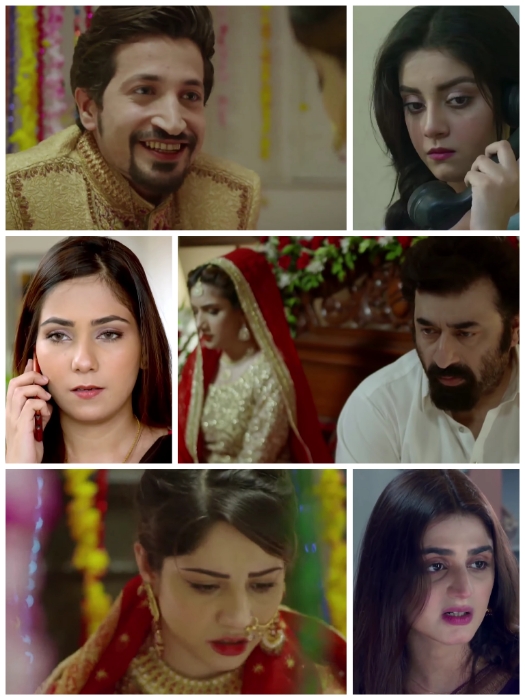 Afzal couldn’t bring himself to trust Fatima completely when it came to his children. Obviously, he has seen that even their biological mother was not sincere to her own children so he was having a hard time accepting that Fatima being a step mother will he loyal to them. Fatima put up with everything patiently because she knows that Afzal is hurt plus she wants to make this marriage work.

Oh well, as if Salma wasn’t enough that Aqmal had to act like a ‘nand’ too. I have seen quite a lot of dramas but haven’t seen a useless & aimless character like Aqmal before. Chalo Azhar still had something going in his life but Aqmal? Devar se Nand ka safar teh kar liya is ne to & oh, Salma’s daughters are just as annoying as their mother. All the pep-talk that those mini aunties gave to Fatima about what she should do in order to please Afzal was cringe x 1000. No wonder they take after Salma, proving it right that jaisi ma waisi beti(yan)!

To be honest, the new entry in the form of Tipu has got me interested in this drama again. Tipu is basically a reflection of Ulfat & it will be very interesting to see how he will push all the wrong buttons because so far, Ulfat has only ruled over people but with Tipu, she will know that it is not going to be possible. The first interaction that Tipu & Ulfat had was pretty amusing, Ulfat is definitely going to learn a lesson or two after her marriage with Tipu.

Overall, this episode of Dil Mom Ka Diya was decent because things changed again. The pace of this drama has been pretty good. I had a good laugh while watching the preview of the next episode too & am definitely looking forward to what Tipu will put Ulfat through. Salman Faisal really was a good surprise package considering the way he performed the character of Tipu. Too good. Please share your thoughts about this episode of Dil Mom Ka Diya.