This drama is such a game-changer and the ending is, how to explain it, too unexpected and out of the box. Let’s get to a bit of flashback and talk about this masterpiece as I am not going to spoil the ending because, People! You should watch it. A horror genre always involves flying objects with scary looking churails who have blood dripping from their mouths even without sucking it off anyone’s neck. But Dil Nawaz is such a beautiful script, it had emotions and suspense beautifully interwoven with the supernatural. Yes, it had some dramatic things but we know, its fiction and the good thing is most of the stuff was very close to the experiences we see people narrating who are affected by the supernatural stuff. A huge round of applause for writer Nabeel Syed. It is a beautiful love story and the characters he has written should be included among this year’s best. He totally expressed the original face of a living creature. You are never black or white, you are always grey. From Dil Nawaz to Alam Ara, you can never truly hate a character because they had reasons, even for the bad things they were doing. And here you have to love Najaf Bilgrami’s direction. He made the viewers connect to each character. The way he made the story progress with every episode showing the story progressing and not reasonlessly dragging the situation, he translated the story beautifully on screen. He showed everyone that you can do it 26 episodes and it will still look good. 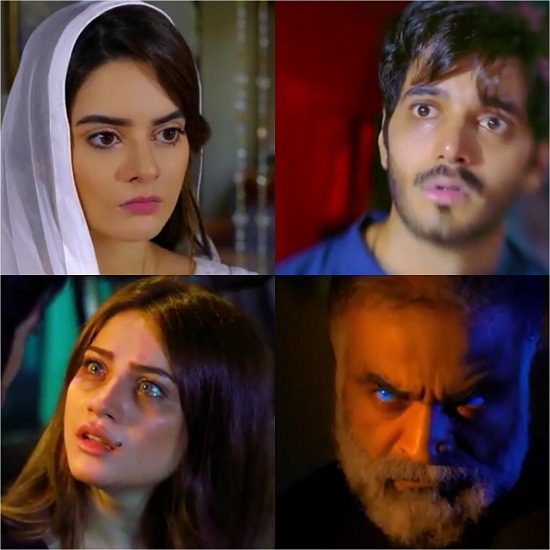 Since you all know about the situation of our award shows, it is highly unlikely but I think Neelam Muneer should be given a nomination for this performance. She just nailed it. At some point in the drama, even I fell in love with her character. She was graceful in all her scenes, not over-doing anything and she showed how an actress should show with her work that why the drama is named after her character. The other performances which stood out are of Zainab Qayyum and Nida Mumtaz. Both the ladies did justice to their roles. Nida was a very over-protective and obsessive mother while Alam Ara played by Zainab was done in an excellent way. She was evil, you hated her one second and the other you were okay with it. Wahaj Ali also tried to get a hundred percent hang of Fawad. He was a bit sloppy at some points but mostly was very good in all the scenes especially the ones where he is under Dil Nawaz’s spell.

With watching a lot of dramas, I mostly like most of the viewers know how a series is going to end. Believe it or not, I even guessed that Afzal would die in Pyare Afzal lol. I was expecting a happy reunion today with maybe Dil Nawaz realizing she is not fit with Fawad but the writer got me. Dil Nawaz has also inspired many others to start making horror genre series. Yes, it promoted a bit of dhaga and darbar culture but they didn’t overdo it.

Have you guys watched the last episode of Dil Nawaz? Looking forward to hearing your thoughts on it and please mention is it just me or the theme music and OST grows on you?