And the focus of today’s episode was on Farah oh sorry, I meant to say, Aashi ka beta, Saman ka BHAI, hum sub ka pyara, DB team ka laadla, the one and only- Raahim! I don’t know why Aashi had to formally announce what name she has come up with for Saman ka Bhai because we already know that she’s been calling him, ‘Raahim’. Plus wasn’t it Farah’s wish to call her son Raahim? I mean, the story is already so pathetic so the least the writer CAN do is make sure that such plot holes are avoided because no matter how minute or insignificant they appear to be, they make the play a lot worse- if it isn’t already!

Khair, the name’s not the topic of interest here because right now, I am enjoying this I-told-you-so-look, guys! See, I told you we are gonna have the piya and 2 biwis living happy together, sharing one roof with their respective children scenario here? Even though the Biwi No.1 has got some ulterior motives of showering all the love and affection on Raahim, I am sure by the end of the play, the begmaat will learn to share the love(s) of their lives and ah there you have it- a complete, picture perfect, happy shappy, FAMILY!

”Kia tum ab mujhay kabhi maaf nahe karo gay.” Umm, remind me again, who was the infidel partner here? Hassan or Aashi? Hassan. But who’s asking for forgiveness here? Aashi. Sick or what? I mean, Aisha wasn’t even directly responsible for the stunt Farah pulled off but still she’s the one supposed to feel guilty here and what’s worse? She’s perfectly fine with it too!

The phrase, ‘Saman ka BHAI’ was actually used quite a few times by Aisha because one of the MANY reasons why she is lattu over Raahim is that, ”Woh Saman ka Bhai hai. Uss kay baghair na Saman kha rahi hai na pee rahi hai. Aap zara uss ki haalat tou dekhen.” Yaar, give me room to breathe please! Even though the way Amber Khan delivers her dialogues makes me cringe, I have this newfound respect for her today because thank God, at least there’s someone here who doesn’t think that Saman’s cute! ”Yeh bacha uss bachi ka khilona tou nahe.” As sad as it is, Saman’s character is as poorly written as that of Hassan because so much, no, everything about her makes no sense whatsoever. You know what girls her age SHOULD be doing? They should be reading naunihaal, watching Disney movies, filling their coloring books and the list goes on but thinking about little BHAI day and night is not what little girls like to do, writer jee!

Oh and if Aisha poses so much of a life threat to Farah & Raahim, why do Farah’s parents easily let their daughter and nawasa go to Aisha’s place without taking a firm stand? And apparently, Farah’s mom knows where Aisha lives and even more surprisingly, Aisha knows the way to her sautan’s house too! I don’t know if Farah’s decision to stay with Hassan and Aisha surprised you guys but if I talk about myself, I would’ve been surprised if Farah had refused to go with her sautan because she has been so thickheaded since day one that it’s actually her intelligence that will come off as a surprise now!

I really don’t know what on earth is Aisha thinking? Okay, she truly, madly, deeply, loves Raahim and all, but for how long does she think she can keep Farah from taking care of her child especially when Farah is right under the same roof! No offense to the blessed brain of hers but her ‘plan’ is actually very flawed!

Hey, don’t you think since the last few episodes, a considerably large amount of screen time is given to a bunch of senseless and purposeless and yawn-provoking flashbacks? From the bottom of my heart, I advise ARY to end this play ASAP because enough is enough yaar, and I really really mean it in every sense of the word!

And brace yourselves, people because the pic below is SHOCKING! 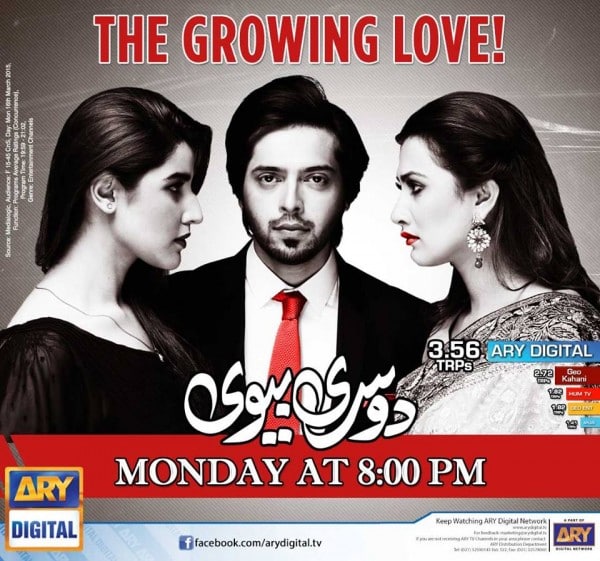 What do you think of the episode? Share your thoughts on episode 20 of Dusri Biwi!