Dusri Biwi is the 17th play that has been produced by Fahad Mustafa’s production house Big Bang Entertainment. The drama has been directed by Anjum Shehzad and written by Samina Ijaz. Apart from Fahad Mustafa the other actors starring in the show are,  Hareem Farooq, Maha Warsi, Ahmed Ali, Shehriyar Zaidi, Amber Wajid, Maham, Fatima, Dr. Ali, Zara Gull and others. The title of the drama has not appealed to many viewers but the producer of the drama Fahad Mustafa who is also playing the leading role in it promises that Dusri Biwi is going to be a different show. In his promotional video Fahad Mustafa said, “Dusri Biwi has a very different kind of a story altogether. The whole situation in a way that we have kept the characters very simple, they are the kind of characters people can relate to. Every second man wants to make the most of the right to marry more than once. This drama will show what a man goes through when he has more than one wife. it is very easy to say that a man will be able to justify his second marriage but keeping the balance is impossible.” 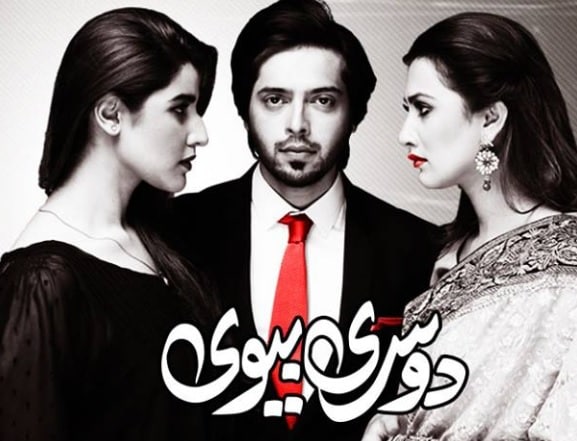 Fahas Mustafa said that he was the one playing the dusri biwi in this serial because he is the only husband of two wives who it appears to be put him through a lot in this drama. Fahad Mustafa also informed the viewers that Anjum Shehzad had joined Big Bang productions. He also said that this was going to be his last serial.

This is the plot outline of the drama according to the official facebook page:

Hareem Farooq in her promotional video, “It has been a splendid experience overall. Don’t take any wrong messages from this, doosri shadi kurni hi nahi chahyeh ghalat baat hai.”

The ARY team asked women if they would like to be someone’s second wife. Here is the response they got:

They also asked if the second wife is always evil? Here is the response of the women they asked:

Watch the promos of the drama here: