Tonight’s episode of Ehd-e-Wafa covered the end of a friendship which is losing its emotional value with every passing episode. Although, all the boys clearly want to be together but the anger and resentment seems to be growing with every passing episode. Saad’s track was relatively more interesting tonight. The opening scene of this latest episode of Ehd-e-Wafa suggested that Saad might rethink his decision but right now, this particular track is clearly going around in circles. Sometimes, it seems like these boys bring out the worst in each other – definitely not an ideal situation! Some of the scenes tonight were meaningful and then there were so many other conversations which could have been chopped down. I haven’t warmed up to Shahzain’s character at all therefore his internal turmoil and ‘tantrums’ only make his character even more annoying. Watching a grown up man act like a spoiled brat isn’t the least bit interesting! Shehryar continues to be the only level-headed character without any issues.

Shahzain’s Ego and Yet Another Fight

Every time these friends have met ever since they left college, their meetings always end with a fight. Even then they continue to meet each other hoping that they will be able to relive the friendship they had in college. Shahzain’s ego and immature approach towards everything continues to be the main reason why the issues between them are not resolved. Until now Shehryar was the voice of reason. He could see that Shahzain was wrong even before but he did not voice his opinion before. Tonight it was good to see Shehryar confronting Shahzain. Ahmed Ali Akbar has nailed his character. His journey too has been quite inspiring. Shahzain is too used to playing the leader, he does not like to be told that he has done something wrong. Shahzain’s reaction tonight once again showed a really negative side of his character. Later on however when his dada gave him the option of getting married to Dua, he did not agree to the plan. While Shahzain’s character is easy to understand, it isn’t appealing in any way and right from the beginning he has been the centre of attention for some reason. 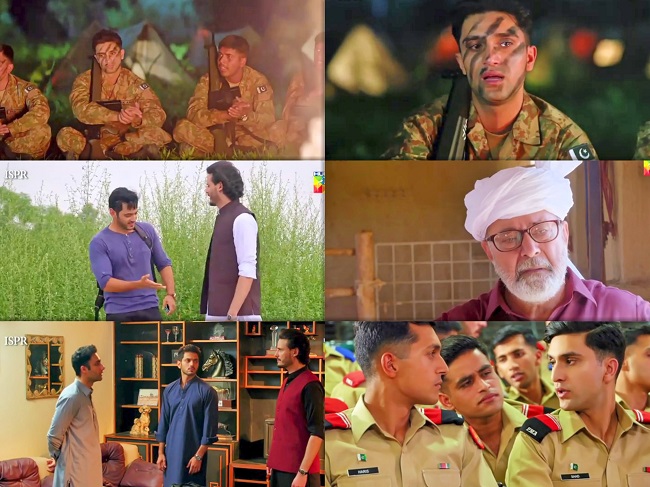 Shahzain is clearly an expert at holding grudges and holding other people accountable. He does not like taking responsibility for his own actions even though he too does not want to end this friendship. After the fight, he blamed Shehryar for ruining his image in front of his dada. The friendship between the boys was the highlight of the first few episodes but once they left college, there has been a little too much bitterness between them and the misunderstandings are never ending – definitely not enjoying watching this track. The individual tracks of the boys are much more interesting to watch.

Saad’s track and the scenes shot at the PMA have been the highlight of this drama for the past few weeks. Unlike Shahzain’s track, these scenes were more meaningful and they showed character growth. Saad once again showed how mature he was in his approach while interacting with his friends at the PMA. Ahad Raza Mir’s performance continues to be faultless. His expressions tonight were yet again on point. In the opening scene it was quite clear that he missed the friendship he had with the boys. At the same time he once again was shown giving Gulzar the confidence he needed to prepare for the big exam. The actor playing Harris’ role is also playing his part really well. The preview of the next episode also suggested that Saad will give up his place so that Harris can get a chance to go get the international training. We definitely get to see a really different and more likable side of Saad’s personality when he is at the academy or when he is not around his old friends, especially Shahzain. 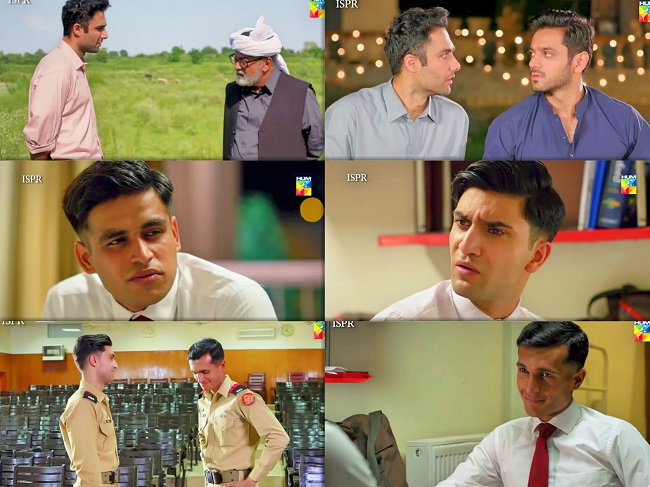 Although this episode was strictly okay primarily because of Shahzain’s tantrums but the preview of the next episode suggested that we will get to see more of Shehryar in his own house in the upcoming episode, which is definitely something I am looking forward to seeing. Dua and Saad will finally meet and the cousin will yet again make an appearance which makes me wonder if there is a reason why Dua’s cousin is so possessive about her.

My favorite scene from this episode was the one in which Shehryar hugs the singer after Shahzain breaks his accordion. This was such a meaningful scene since no one could have understood this man’s pain better than Shehryar.