We can finally stop guessing what is wrong with Imroze because the cat is out of the bag. Imroze’s reaction was not surprising at all because we are all well aware of how negative he is by now, even the positive streak in him that was revealed when he asked Roomi to let Paymaan think that he left her because he was not loyal to her was not very convincing. A man must have a very big heart to make such a sacrifice even if he is about to die. We can only wonder if Imroze loved Paymaan enough to put himself through all this pain in order to ensure that his wife can move on and have a happy life because from the very first scene to the last one of Imroze and Paymaan’s life together we never saw them happy. Paymaan always felt like she was not good enough or that Imroze did not love her enough. Imroze’s character will most probably make its exit in the next episode and I still feel like the viewers weren’t even introduced to his character properly unlike all the other characters in the play. It is somewhat ironic that the writer and the director managed to cover the smallest details about the past and present of the side characters brilliantly without leaving any loop holes but failed to do the same for the man who is going to play a major role in changing the life of our leading lady. So, Imroze was all alone in this world after all, he did not have an ugly past or a dirty secret …. basically there wasn’t much to his character at all except that he was lonely, depressed, insecure and now very sick too and he only entered Paymaan’s life only to ruin it forever! 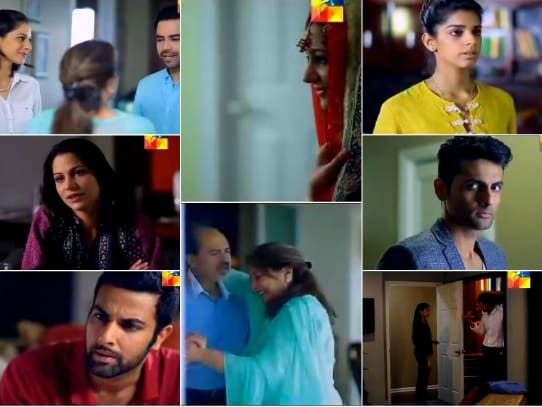 Poor Roomi has yet again been given a huge responsibility and like a good friend he only questions Imroze’s future plans instead of revealing the truth to Paymaan. Roomi tried to make Imroze realize that he was being unfair to Paymaan but Imroze just wants to go away so that Roomi and Paymaan can have a happy life!! I must say that Imroze’s character had potential, if we could have been shown the good and the bad in him but all we saw was a lot of negativity which basically makes it impossible for me to feel for his character.

Tabbasum, Haider, Shams and Sara finally got their happy ending. It was quite predictable what Tabbasum had in store for Shams but the complete change in Shams’ stance regarding having a child came as a good surprise. It was good to see Tabbasum and Haider dance in joy but even these two loveable characters could not keep my interest in the story alive tonight. Things keep on moving forward in Firaaq but do they really make you look forward to more? I have to say not at all. There is too much talking in the play and most importantly our leading lady has become very dull. Tabbasum wants to mend fences with her daughter next and honestly speaking I am not looking forward to it one bit! Can Paymaan be any more berung? Do I want to see Roomi playing the savior yet again? I guess not! Roomi’s character is sweet but the story is too predictable and there is hardly any chemistry between Sanam Saeed and Noor Hassan. Why would someone like Roomi want to be with someone like Paymaan? I hope that the drama gives us something new and entertaining to watch in the upcoming episodes because for now there isn’t much I can connect to. The highlight of tonight’s episode was Shams and Sara’s reunion and it was nice to see Sara wearing Tabbasum’s wedding dress. Honestly speaking, I couldn’t care less about what was going on in the lives of our main protagonists – which is sad!!