Ghairat promises to be a drama which will highlight the issue of honor killings. When I watched the promos I found Iqra Aziz’s character appealing and it seemed like this drama might have a different take on the issue. The first episode was decent enough because it introduced all the main characters in the story clearly and also highlighted the kind of relationship all of them have with one another.

Jibran Syed’s character Usman is that of a controlling, abusive, narcissistic brother of two sisters Iqra (Sundus Tariq) and Saba (Iqra Aziz) who are not willing to take dictation from him. They have another brother too (played by Faizan Shaikh), who seems to endorse Usman’s behavior. Samina Ahmed plays the role of a docile mother who tries hard to keep peace in the house by making his daughters compromise. Her conversation with her sister also showed that her concept of a “perfect life” could be the reason why her sons in particular were brought up like that. Through other conversations as well the viewers found out why the brothers were raised with such a mindset. It was however odd that daughters who were brought up in such a set up were not subservient especially because both of them believed in doing whatever they could to take charge of things. If Saba alone was like that it would have made more sense. 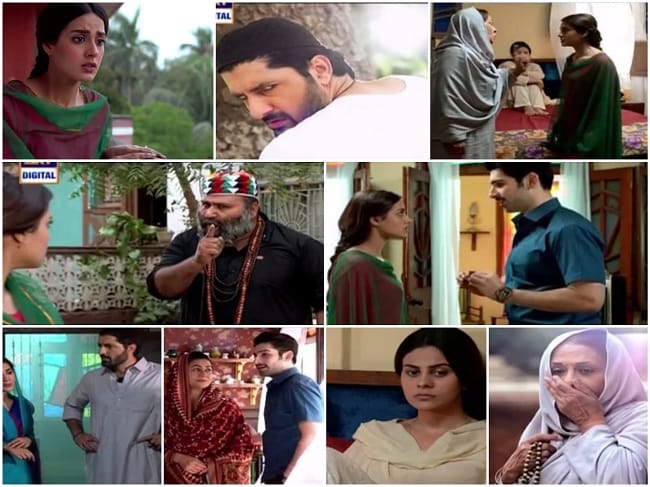 Although Iqra and Saba’s circumstances do not allow them to live their life the way they would want to but even then they are not completely resigned to their fate. The opening scene showed Saba mustering up the courage to speak her mind even though she knew it could lead to infuriating her brother even more. The hitting part however wasn’t needed and I also felt that the aftermath wasn’t covered properly but it did go to show how far Usman could go if his sisters did not act according to his wishes. Because of her circumstances Iqra has a mental disorder which her mother and brothers fail to understand. They think she is possessed until Shagufta tells her husband that Iqra might be faking her condition. Saman Ansari plays the role of Shagufta, Usman’s wife, who will probably play a major role in instigating Usman to be even more cruel towards his sisters. The fact that Usman instantly believed her went to show that she exercised great influence on him. Iqra is numb and does not even share her feelings until Saba gives her hope. Saba on the other hand probably sees hope in Zohaib (Muneeb Butt) because he can give her a life which would be very different from the one she is living right now. Usman does not even like Zohaib or his family much probably because they are too open-minded for his taste.

Jibran Syed did complete justice to his role but his character. Iqra Aziz and Muneeb Butt have great on screen chemistry and their scenes together were shot well too. All the other actors performed superbly in tonight’s episode and it was directed well too. Although I did not feel an instant connection to the characters but I am definitely interested in finding out what happens next. Like I said I found it difficult to relate to Saba and Iqra’s rebellious nature since both of them were completely different from their brothers. Would such brothers allow their sisters to go to college even? Saba and Iqra looked like well groomed girls therefore I am wondering where they got this exposure from since their father was probably like their brother too.

The preview of the next episode was intriguing. I have a feeling that the first few episodes at least will be fast paced.