Gul-e-Rana and Adeel continued trying to put each other down all through tonight’s episode like it was a competition and whoever won was going to get a special award in the end! The only award these two deserve is one for being extremely immature. This is not the first time in a drama that a very serious and sacred relationship like marriage has been turned into a child’s play. If the writer’s intent is to show a newly-wed couple who does not understand that relationships don’t last the way these two are taking things forward then he is spot on but since this drama has absolutely no depth therefore I doubt that the writer had some higher purpose in mind. While I was happy after watching the last episode because it looked like Gul-e-Rana was not going to let Adeel have his own way, I was extremely disappointed to see her playing games to displease Adeel in this episode. If she does not want to compromise or go out of her way to make this marriage work then that is her own choice but resorting to childish tactics to get Adeel ‘in trouble’ was extremely foolish of her.

If Adeel is at fault for not respecting his wife and for forcing this marriage on her then Gul-e-Rana is to be blamed for treating this relationship in an equally casual manner. While she never had the courage to talk to her Taya about the more important things in life, she had no problem telling Taya Abu about Adeel’s outing with Maria which she planned. She knows what Adeel is capable of doing terrible things therefore instigating him in this manner is nothing but foolishness. Every time Rana has tried to put Adeel down, he has done something even worse than before to make Rana’s life miserable therefore it would have been more realistic if we saw her trying to keep herself out of trouble. I understand that Rana is too young to deal with this man tactfully but she is smart enough to know that provoking him will only land her in more trouble. Rana got married to this man thinking she could continue living her life the way she wanted once Adeel got the satisfaction of marrying her but it was most certainly not an intelligent move. While I think that Rana’s character is very immature, I must say that I can relate to the way she feels about Adeel. It is very difficult to respect someone like him but then a girl should never get married to a man she hates! If this drama is sending out any message at all then it should be that marriage is not a joke and marrying someone like Adeel will make you miserable for the rest of your life but I wonder how many girls Rana’s age would look at the story with this perspective. 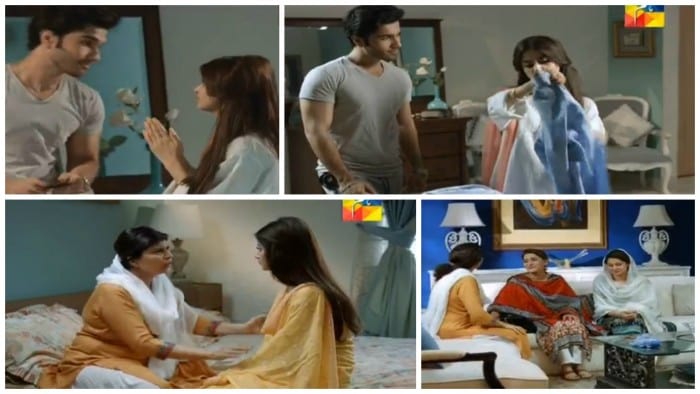 Munira made an appearance today to serve the purpose she is there to serve – making sure that her daughter does not get an ounce of understanding or support from her. It is really sad how the mothers in our dramas are ‘used’ to make matters worse for their daughters. Adeel openly flirts with his cousins, something Munira somehow fails to notice and thinks he is the ideal match for any girl.

I must say that Gul-e-Rana’s character did remind me of Rameen’s character in tonight’s episode. Firstly because just like Rameen she is helpless, no one will believe her even if she tells her mother or Taya something because Adeel is too clever, just like Numair. Secondly because Rameen too used to threaten Numair a lot verbally but in the end things used to happen the way Numair wanted them. And most importantly Rana too has a mother who could not care less about her daughter’s happiness.

It would have been great to see a story of a young couple struggling through the first few years of their married life if it did not involve a forced marriage and a husband like Adeel. I wish that the writer did not show Adeel as a womanizer but as a man with some serious weaknesses in his personality (stubbornness, ego) which he ultimately managed to overcome with time. It would also have been good to see Rana’s mother guiding her daughter through this phase of her life to make this marriage work! Well, as the preview of the next episode showed that is most certainly not the case here therefore we will have to do with watching another husband on screen who thinks he can get away with anything and a wife who really does not have a choice but to put up with it all!