This episode is so far the best this drama serial has produced, the sheer magnitude of things that went down in this one is maddening. This episode sure as hell was a roller coaster ride from one intense moment to another it sure left the audience out of breath and out of their minds by the time it ended. The drama serial is about to conclude and it was evident from this episode because many story arcs reached the climax.
The episode started on a very low note with Qasid threatening to kill Sami unless Momina agrees to marry him. The whole scenario was heart wrenchingly sad and blood boiling at the same time. You feel sad for Momina’s helplessness and at the same time you feel this smothering hatred for Qasid and Fehmi that it makes your blood boil.
While this is happening at home Abeer is at the police station watching the cctv footage of her father being murdered and the moment of reckoning comes for Qasid when she recognizes him. Faraz has turned out to be a real gentleman and the way he has supported Abeer and Momina through their ordeals is sure commendable.
On their way back Abeer and Faraz find themselves in a traffic jam caused by a protest and at that moment the audience is convinced by the time they’d reach home Momina wouldn’t be Momina anymore but Mrs. Qasid. But it was Momina’s lucky day and for the audience too who have been rooting for Momina and Arham since the beginning Arham comes for Momina’s rescue when she needed it more than ever. 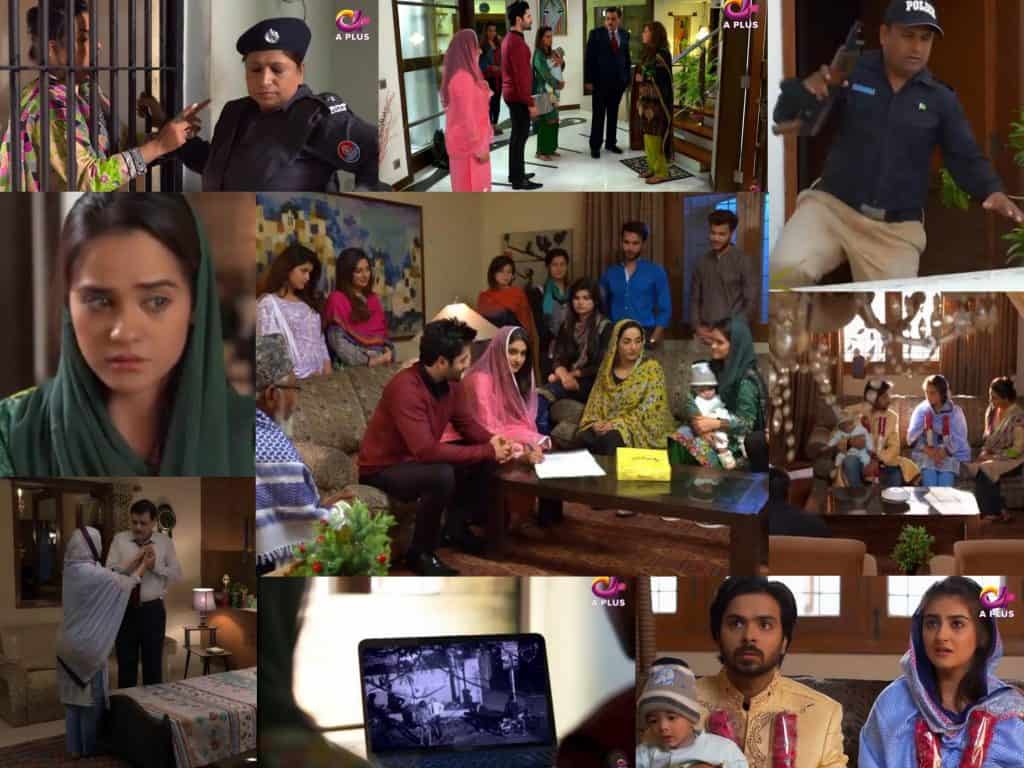 The writers deserve all the praise for how well written this scene was. Since Arham didn’t feel surprised after seeing Faraz when he came that gives us reason to believe that Faraz must have called Arham and explained the situation which is why Arham headed towards Momina’s home but what Arham didn’t know was the forced nikkah ceremony that was going on and even though it took him by surprise he dealt with it very maturly so that he could give police some time to arrive.
Qasid manages to run away but the police arrests Fehmi and Momina is saved. This situation rattled Arham so much that he makes an impulsive and independent decision for himself for the first time in his life. I have praised Arham and Afaans relationship before and I will do it again. The father-son chemistry that these two share is so rare and that makes the heart melt.
Afaan finally does what was expected of him for so long now, he apologizes to Momina and tells her that he wants to make ammends by protecting the three of them and taking their responsibility. Arham and Momina marry each other in the same nikkah ceremony that was originally arranged for by Qasid so yeah I liked the sense of humor there.
Afaan takes Abeer, Momina and Sami to his home and tells Amtul that they will live with them now because he feels responsible for them and they wouldn’t be safe alone. Amtul as expected creates a lot of drama but in order to soften the blow Afaan and Arham have decided to keep the nikkah secret for now.
The episode ended with a typical girl on girl trash talk where Fizza reminded Momina who the boss was but the poor girl has no idea she is talking to Mrs. Arham now.
Over all the episode was very thrilling and well written and well acted I might add. It was hinted in the end that Amtul and Afaan’s marriage might suffer because of these recent developments, how this story line works out is something we’ll have to wait to find out.

How’d you find this episode of Haara Dil? Yayy or nayy?