So episode 22 aired today and it focused more on Areej and Zawar’s relationship and followed the trajectory that was precalculated in last review. Zawar is using his relationship with Areej to manipulate Arham into divorcing Momina and marrying Fizza instead. Other than that Areej and Zawar never really had a strong enough relationship that was worth fighting for and above such petty tactics. Even though it was implied from the beginning that Areej married Zawar out of love but as the story has disclosed it wasn’t the actual case. It was more of an arranged marriage and at the time both didn’t have any serious objections against it but as the time passed they grew more and more distant. Even though Zawar failed to fall in love Areej did.

Arham finds himself responsible for ruining his sister’s marriage but Areej reassures him that there never really was anything to save in her marriage to begin with. Areej has been portrayed as a very strong headed character since the very beginning to see her breakdown like this was surely saddening for both the audience and Arham. To save his sister’s marriage Arham pays Zawar a visit and tries to talk him out of divorce. But Zawar comes up with the counter offer that he will not divorce Areej if Arham marries Fizza. Arham naturally finds that nonnegotiable and walks away. Amtul is devastated to see her daughter suffer like this and blames Momina as always. 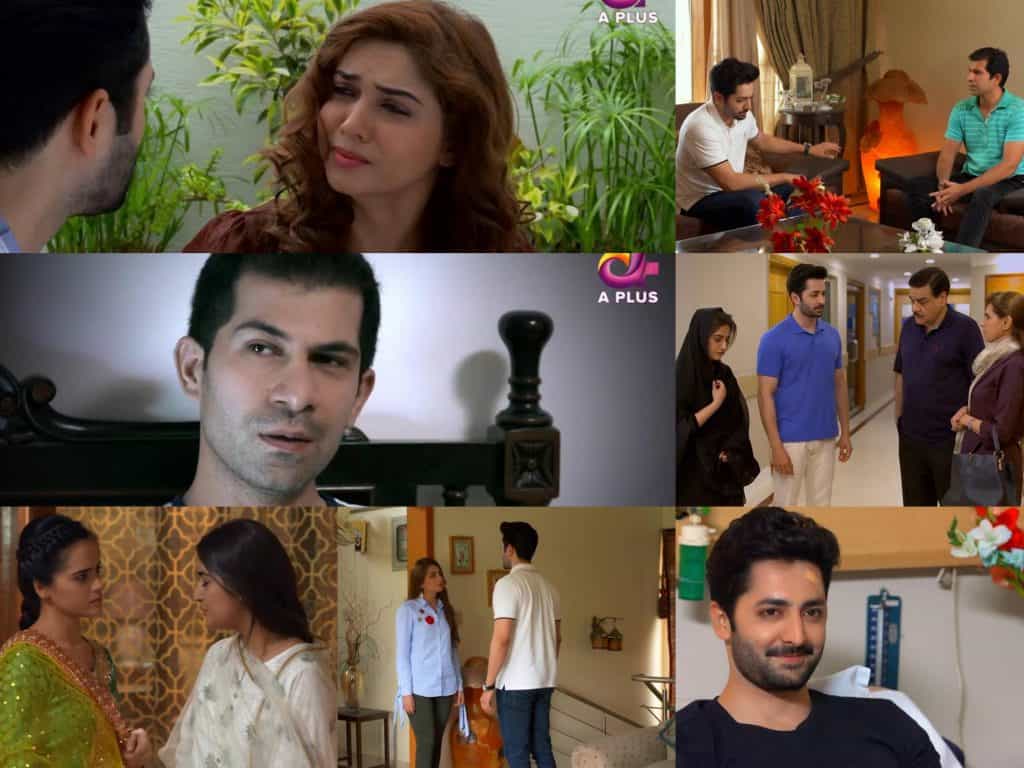 Fehmi is turning out to be an amazing character, her character development so far has been the best amongst all. When Qasid calls her to do something about the situation he is in and help him out she slams him really hard and threatens him that she will testify against him in court because that is what he deserves. Fehmi has also started playing the motherly role she was originally meant to play. She takes care of Sami and is very protective of both Abeer and Momina now.

Abeer is getting married to Faraz and it is interesting because this play started with a wedding it is only fair it ends with one too. Faraz suggests the idea that Momina should live with Arham now and focus on her married life rather than focusing on Sami. This might cause some problems in upcoming episodes.
Arham and Momina are finally coming to terms with their relationship. They still argue quiet a lot but then again when there’s love there’s constant nagging each other too. Momina being the noblest of noble beings that she is once again suggests the idea of divorce and finally Arham responds the way I would have “bakwas mat karo”. At this point it is humongously annoying to see Momina be the bigger person all the time.

At last Fizza has found some of the integrity she had lost along the way and left Arham’s house to finally live with her brother.
Overall this episode was well paced well timed and character wise very well developed. It is almost the end and we can already see how that will happen and so far the conclusion doesn’t seem rushed.