Ohkay so, the characters & their intricacies in Hum Kahan Ke Sachay Thay are still quite interesting but unfortunately, the way the story is being taken forward through certain situations seems to be quite pointless. This is the only word that popped in my mind while watching this episode. There were so many moments that I felt did not make any sense & it is actually quite sad that for a drama as engaging as Hum Kahan Ke Sachay Thay, it has come to that stage where I as a viewer am struggling to watch it!

The very first thing which seemed absolutely ridiculous to me was Mashal’s picture in Mehreen/Aswad’s room. Even if it was in the guest room that was in Mehreen’s use, what was Mashal’s picture doing over there, especially now that it has been established that Mehreen gets triggered by it & she starts hallucinating? Aswad was gone, Saleha is a very easy-going mother in law, therefore no one could’ve stopped Mehreen from getting rid of that picture. They have already shown that Mehreen has been thinking about Mashal non-stop, therefore they didn’t have to make it so definitive by putting a picture of Mashal on the nightstand because that is not the place where it belonged & not even the house to be honest!

I am sorry but the reason why I really liked Mehreen’s character was how she was a fighter. With everything going against her, she still pushed through. Yes, her mental health is deteriorating, therefore such slip-ups are expected from her but the Mehreen I know is definitely NOT someone who would wear a saree & put on the pinkiest shade of pink to impress Aswad, that too because Saleha Khala asked her to. It would’ve been better if they had stopped it right there when Mehreen told Saleha that she was not going to wear a saree. Alright, she wore one because she wanted to respect Saleha’s request but the way she reacted to it was obvious that she wanted to impress Aswad too & when that didn’t happen she was upset. Mehreen has always been the kind of person who has known what to do, therefore to see that changing does not really look convincing. 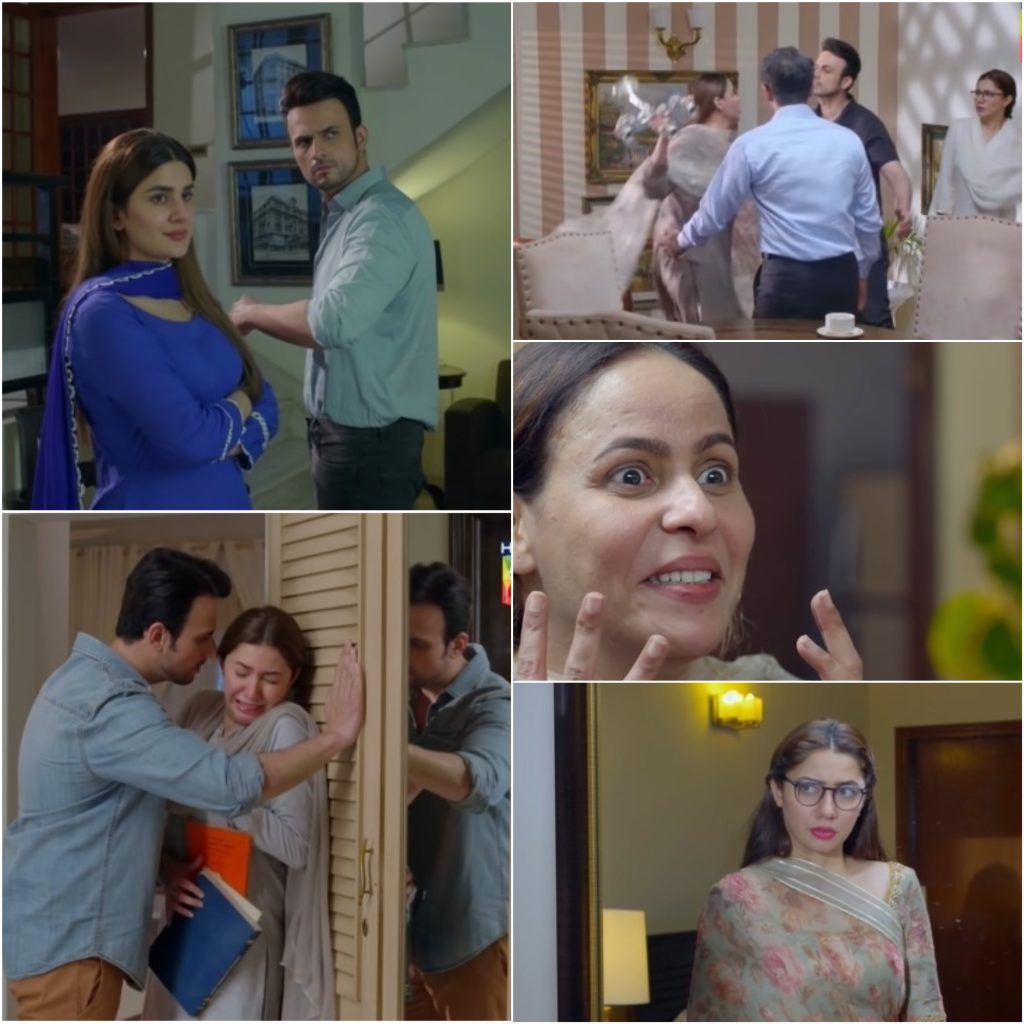 I am not sure what has happened to Saleha? For her to believe that Aswad has come back because of Mehreen & the love he has for her is plain stupid – that’s the only word that can be used to describe the way she has been analyzing this situation. I mean her son literally left the next morning of his marriage to Mehreen, he has not called her once & has not been keeping in touch. He doesn’t like to talk about her & this was evident right before the marriage, so how can she believe that it’s a normal marriage & that her son intends to keep it healthy? The flashbacks have also stopped making sense because the conversation they showed between Mehreen and Aswad actually seemed confusing. Mehreen graduated recently and ever since Aswad came to Pakistan, they both have had tiffs on the phone and in person. It was established that since 5 – 6 years, Mehreen and Aswad were not in touch and Mashal was the one who would tell him everything about what was happening in Pakistan, so to see Mehreen randomly telling Aswad that she has graduated was again pointless. Yes, the director has relied heavily on the flashbacks to add another dimension in the current situations, but this one was a miss!

As far as Mashal and Mehreen are concerned, it makes sense that they turned out to be this way because of their childhood traumas and experiences, but looking at Aswad being simply vile in this episode made me think about why he was being this way. Aswad seemed like a normal child who had the most normal childhood as well. He was loved and acted as if he was being raised in a good environment, therefore I think it is safe to believe that the way his personality has shaped up now is not a result of his childhood. Keeping that thing aside, it can be easily claimed that he has turned out to be this way ever since he got in touch with Mashal & now her death has left him shattered. Therefore I will not blame Saleha or even his childhood for that matter, he grew up to be a normal person but he himself lost the plot after he started believing Mashal’s version of things. In this episode, he saw Mehreen’s condition & how rattled she was, but it took him only one dialogue from Mashal’s memory to believe that Mehreen was putting up an act. It is frustrating to see such a dumb character like Aswad who chooses not to believe or even analyze the situations based on his own mental capabilities. He is conveniently comfortable in seeing things from Mashal’s perspective. To be honest, it was understandable at the beginning of the drama but at this stage, to see Aswad not changing this pattern at all is very frustrating and off-putting & because of that, I put the entire blame on him for being so vile!

The whole maafi talafi scene was also a bit of a stretch. It seemed as if it was planned to give Shagufta a bit of a margin to say what she wanted to. The way she behaved was another story. The close-up shot of the house-help crying was again pointless. The director has definitely put the emotions to good use & right from the beginning has set the tone perfectly but now seeing the story going around in the loop & not making any progress is not doing the drama any favors. Also, they really need to cut down on the music & the overuse of the OST. No doubt they have all the reasons to be proud of what Azaan Sami Khan has created but they better not use it till the audience starts getting sick of what otherwise is a beautiful song!

Mahira Khan was the star of this episode for sure. Her acting and performance were simply brilliant but I am really not happy with how Mehreen’s character is turning into a ‘bechari’ which she was not before her marriage. I liked a few instances where she gave it back to Aswad & also didn’t hold back in saying that maybe Mashal had committed suicide because of him. This part of Mehreen is what I want to see. Yes, she is allowed to feel vulnerable & deal with her traumas her way but for her to act according to how Saleha wants is definitely not necessary & makes her character look weak. Well, after watching this episode & seeing how everyone has been reacting, I must say one should ask Nani how she raised her children that not even a single one of them turned out to be decent human beings & they carried that forward in their children too – sad! Please share your thoughts about this episode of Hum Kahan Ke Sachay Thay.