Ohkay so, this episode of Hum Kahan Ke Sachay Thay had some of the moments that were important but the rest of them did not really make much sense. Unfortunately, the drama is in that stage where the story is not moving forward & is in a loop with more or less similar situations & scenes being shown differently. I do understand that every single director has a pattern & direction style. Although Farooq Rind has proved his mettle as a director in the past, the most bothersome aspect of dramas directed by him is the over usage of music in general. It won’t be wrong to say that Hum Kahan Ke Sachay Thay has turned into such a noisy drama that while watching this episode, I held a remote control the entire time because I was done with the loud music. I am still haunted by what the OST of Ishq Zahe Naseeb did to me & I can totally see this one going down that lane.

First & foremost, I really think Saleha needs to stop with whatever she is doing & actually analyze what she wants to do. It is mind-boggling how every single time she tries to get in touch with Saffan, hoping that he will eradicate Mehreen’s problems. What’s sad is that she does this without actually doing anything within her family, like putting things to an end that need to be sorted & then contacting Saffan. It is amusing to see a woman of her age & experience dealing with a person like Saffan so casually as if he owes her something, therefore whenever she feels, she gives him a call in a hope that things will get sorted. Saleha’s character was definitely my favorite & she still is but it seems the writer had a loss of a train of thought at this point & got confused as to what she wanted to convey through this character. Saleha thinks Aswad loves Mehreen while still being confused & hoping to get Mehreen married to Saffan? Just in the previous episode, Saleha was happy that Aswad came back because he loved Mehreen & in this episode, because she didn’t have much to do, she once again spoke about the divorce. It is unfortunate that in a drama where the story is all about intricacies & layers of the characters, a few of them have turned out to be so one-dimensional, including Aswad.

Aswad doesn’t stop being a loser & continues to prove it further. He has never taken responsibility & once again, he made it obvious when he wanted Mehreen to sign the divorce papers before him. It gives him a sense of entitlement & power as if he owns Mehreen & can make the decision for her life. Aswad never took responsibility & never owned the equation that he had with Mashal. Similarly, he is not taking any accountability for playing a part in Mashal’s death & wants Mehreen to bear the brunt, exactly how he wanted Mashal to bear the brunt all alone for falling in love & thinking they had something special going on. At one instance, I did feel as if he wanted to keep Mehreen in his life based on how he used to feel about her in the past but it just showed how his tears stem from the hatred, disgust & disappointment he feels because of Mehreen. As far as these intricacies & complications are concerned, they have been conveyed beautifully & convincingly in this drama but on the whole, it is definitely not an easy watch because of the way it has been tackled by the director as well as the editors. 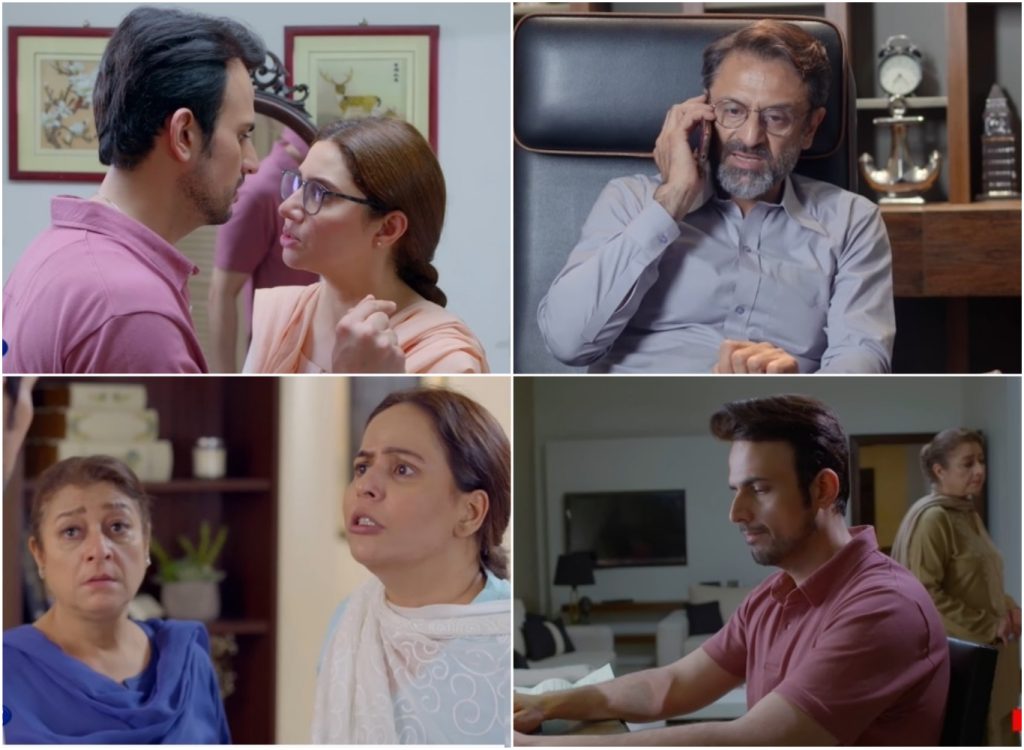 Mashal’s father Tahir forgave Mehreen but not because of her, only because he found out who actually is responsible for Mashal’s death. Aswad definitely deserved that slap & I am glad he got it. Here’s to hoping that it will at least serve as an eye-opener for him but the Aswad that we know will never see it that way. Instead, he will put the blame on Mehreen once again that it is only because of her that he got slapped. Aswad is completely fine with the idea of Mehreen being the culprit & never once has imagined that someone can see him as a culprit too. I really think they have stretched it a bit too far now with Shabbo not spilling the beans & keeping the secret in her heart. Although the preview of the next episode did suggest something on those lines I won’t believe it until I see her coming clean & telling the truth!

Mehreen’s mental health is deteriorating. It is so unfortunate that none of these fears of hers will ever be addressed by people around her because they are either too busy getting her divorced or tortured. Aswad likes to mentally torture her & Saleha thinks divorce from Aswad & marriage to Saffan will fix all of her problems. Unfortunately, no one is able to understand what she is feeling & what she is going through. I don’t know why after watching this particular episode, I can foresee another suicide with Mehreen taking that decision for herself. There is no way that Hum Kahan Ke Sachay Thay is going to have a happy ending because both Aswad & Mehreen are too complicated & twisted in their own manner so there’s no way they both will ever sort their issues & put all of this behind them. Mehreen has started to feel unwanted, unloved & her depression is consuming her more & more every single day. It will be unfortunate if that happens but will be interesting if the writer comes up with something entirely different than that. The Mehreen that we’re seeing now has become too submissive & is still not fighting enough for herself. The scene where she comes asking Aswad for clarity from Tahir seemed too unconvincing. She should fight more & not let her inner demons consume her but at this stage, her character seems to be going that route only!

This episode of Hum Kahan Ke Sachay Thay was alright to watch. Sadly, some of the scenes were so pointless & repetitive that they literally made no sense. In the initial episodes, I actually appreciated how there were some scenes in every episode where there was no background music but that seems like a luxury now. Too loud, too unnecessary. I really think its high time Shabo tells the truth to everyone. Tahir found out about Aswad being the reason behind Mashal’s death, might as well find out about the sleeping pills too! Please share your thoughts about this episode of Hum Kahan Ke Sachay Thay, my ears still hurt with all the music though!