Ohkay so, one thing has been established so far that almost all the characters in Hum Kahan Ke Sachay Thay have been introduced. The story is pretty much about the rivalry between Mashal & Mehreen & how the situations are going to pan out differently for them based on their circumstances. Therefore, it now becomes a task for the director to keep it engaging with each passing episode because, at times, stories like these tend to become stagnant with nothing new surfacing & situations revolving around a handful of characters. Hum Kahan Ke Sachay Thay definitely is an intelligently written story exploring the emotions, traumas & struggles of the main characters. Props to the writer & the director for elaborating it all in such a manner where it looks engaging because so far if we look at it, the story in its totality seems to be quite simple & basic.

This entire episode was dedicated to Aswad & how his arrival was going to change the equation shared by everyone now. Mashal seems adamant to score brownie points & she was being helped by her mother as well. While watching Aswad & Mashal’s interactions, one thing was quite clear that for Aswad, this was nothing more than a friendship. This was the kind of impression he gave right from the moment they met, whereas when it came to Mashal. it was obvious that she was smitten by him & was already daydreaming about him being her prince charming.

I will say that at a certain point in the episode, I kind of felt as if Aswad didn’t have anything else to talk about apart from Mehreen but then this was the director’s way of establishing how Mehreen still had a soft corner in his heart. Aswad may not have realized it yet but Mehreen definitely has been an important part of his life, at least his childhood & teenage years, therefore even if he doesn’t pay much heed to it, he can not help thinking or being concerned about her. Mashal has been trying really hard to make an impression but the effort Mehreen put in decorating his room was a reason big enough for Aswad to be impressed by her. I thought he would at least look into the painting a bit more but he chose not to, obviously, he has his reservations & he isn’t completely ruling everything out that Mashal has told him about Mehreen but he too has started to break the ice, which definitely isn’t something that Mashal wants. 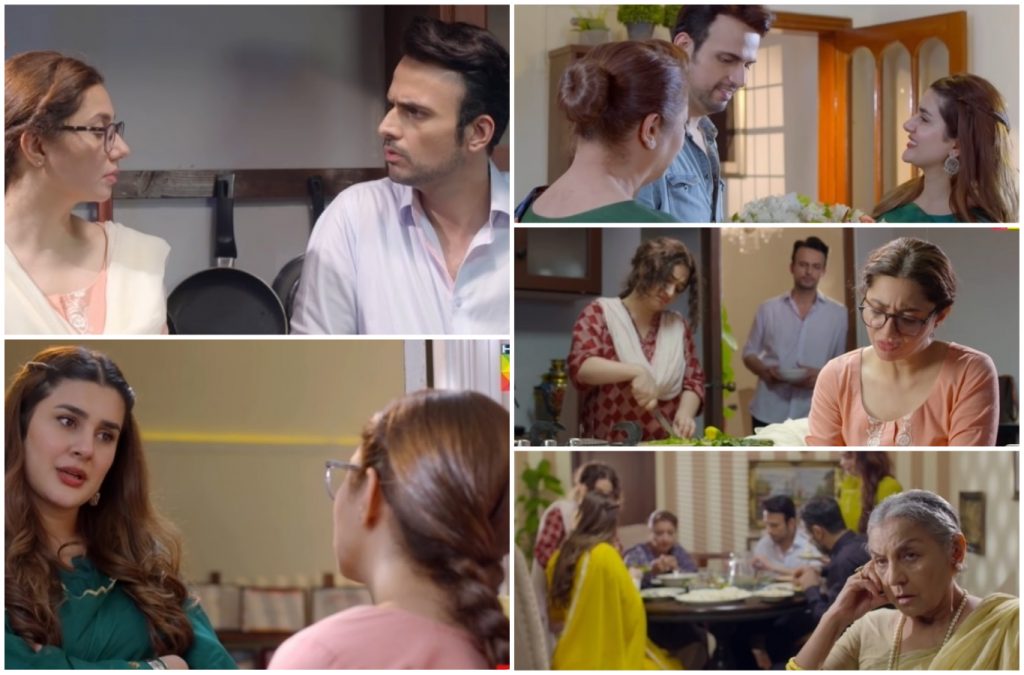 The first impression Aswad got of Mehreen was once again quite disturbing for him. Once again showing how easy it is for Mehreen to be misunderstood. It was also established throughout this episode that even Mehreen was tired of being misunderstood & at times she didn’t want to give such an impression but because she is so used to all of this, she couldn’t help it. Although Mehreen never wanted Mashal to feel uncomfortable with the thought of her & Aswad but just because Mashal warned her, Mehreen chose to play along & immediately felt bad the moment Mashal left. While talking to her friend Sheeba, Mehreen made it clear to her that she does acknowledge the feelings Mashal has for Aswad but sadly just because Mashal has made up her mind that Mehreen is going to ruin it for her, she chose not to explain herself. This goes to show how Mehreen doesn’t believe in competing with Mashal but because she is perceived that way, she doesn’t bother much.

Aswad complaining to Saleha once again made me wonder why doesn’t Saleha take Mehreen’s responsibility. However, it was made clear in this episode that she was waiting for Aswad to come so that she could get him married to Mehreen. Saleha knows exactly the kind of life Mehreen is leading in that household, therefore it doesn’t seem to be a wise choice to let her suffer there & only bring her to her place as a daughter-in-law. Mehreen is always quite comfortable around Saleha therefore Saleha should’ve eased her pain even before Aswad came back. Nani once again tried to convince Saleha about Mashal but even she knew that her daughter has made up her mind. It was interesting how Nani exactly knew what Tahir & Shagufta were trying to achieve, whilst also knowing what was in Saleha’s heart too.

The scenes which brought comic relief were nicely done & enjoyable to watch, however at times did seem out of the blue as if they were forcefully edited in. I am still glad that we have a character like Shabo who does what she’s supposed to & brings some kind of relief in overall tense situations. Aswad & Mehreen’s first interaction was nice but what’s better was Aswad acknowledging that he crossed the line & misbehaved with Mehreen. It shows how this apology will automatically put Mehreen’s heart at ease & she will find it easier to be herself in front of him. She will not try to avoid & will interact with him freely. Mehreen will find herself in a bit of a fix now because she has accepted Saffan’s proposal though, & it won’t be long before all the feelings she has for Aswad will be rekindled. Let’s see.

This episode of Hum Kahan Ke Sachay Thay was entertaining. I did enjoy most of it but some of the scenes seemed a bit forced like Shagufta discussing the electricity bill with Mehreen & then everyone going on & on about Mehreen at the dinner table. Mahira Khan has given a very impressive performance with each & every expression of hers making it clear what Mehreen is thinking or what she’s going through. Usman Mukhtar fits Aswad’s character effortlessly. Kubra Khan’s performance was effortless in most of the scenes but in some scenes where she had to actually show that Mashal was feeling uncomfortable, she definitely struggled. Once again, the perfect usage of OST & background score. Definitely looking forward to the next episode.