With this episode, Shanaya’s journey came to a tragic end and Azlan’s actual journey has just started. This episode was penned down well but some of the performances and execution of a few of the scenes were not up to the mark. Shanaya’s exit from the drama was somewhat predictable right from the beginning since there was always a great deal of focus on the dangers involved in her line of work. Azaan Sami Khan performed well in the post-marriage episodes but tonight he failed to add the kind of intensity that would have made Shanaya’s death as impactful as the writer wanted it to appear on the screen.

Azka’s reaction was also the most disappointing element of this episode. Her practical approach at such a time did not go well with her character at all! This was a meaningful episode for the most part but it could have been far more powerful had the director compromised slightly on the ‘visual’ aspect of some of the scenes such as Azlan carrying Shanaya and running to the car and no bloodstains on Shanaya’s clothes after being shot! Some of the senior actors performed way better than the leading cast! Sajal Aly gave a solid performance but her overall look did not go well with the situations yet again which definitely affected the overall feel of these scenes and took away the realistic touch from them. Who goes after kidnappers and killers with a semi-formal look?

Azlan and Shanaya’s couple turned out to be a breath of fresh air for a few weeks. The gradual change in Azlan’s character ever since these two got married along with the kind of understanding these two had made this on-screen couple one of my favorites. It was quite evident that this beautiful love story was going to be interrupted by a tragedy. It was also clear right from the beginning that this would eventually turn out to be a transformation journey for Azlan. The “definition” of Ishq-e-Laa in the first two episodes suggested that the story will have a strong spiritual element to it as it moves forward.

Even though some of the most important aspects of the plot have been predictable, Ishq-e-Laa has for the most part kept my interest alive. Tonight’s episode showed how Shanaya put herself in a dangerous situation yet again without thinking about the circumstances. Shanaya’s faith in Allah was so strong that at times she relied solely on Allah for protection without taking adequate security measures even when they were a must! I always felt that this aspect of her personality was a bit extreme but her intentions were always pure therefore I found myself worrying for her than finding her annoying. Azlan’s reaction to Shanaya getting shot and fighting for her life was undoubtedly the most interesting element of this episode even though Azaan Sami Khan’s performance in this episode left a lot to be desired. 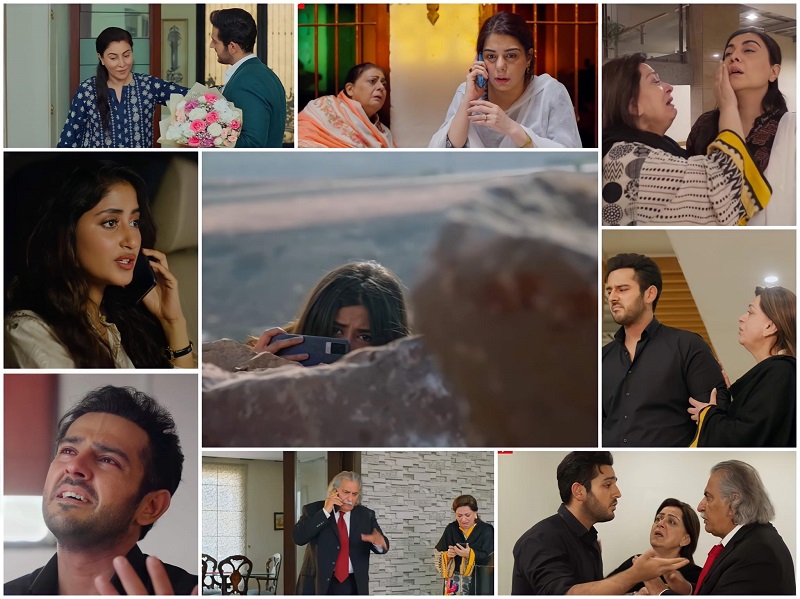 Azlan was always shown as someone who liked to be in complete control. Unlike Shanaya, he did not leave things to God or fate, he was sure that he was completely capable of running his life the way he wanted. Therefore losing control was a contributing factor to the anger and frustration he felt, apart from the loss of his wife who he loved dearly. Even when he prayed to Allah, his tone and choice of words were wrong. Azlan’s feelings were penned down so well by the writer, it would have been so great had Azaan Sami Khan breathed life into these scenes in an apt manner. The clarity in the writing helped me understand his reaction to this loss.

I was expecting a completely different reaction from Azka after hearing about Shanaya’s murder. She is an intelligent young lady who could have easily put two and two together yet she was too busy thinking about things which should have been the least of her worries. Her daadi’s reaction made a lot more sense and therefore was easy to relate to.

The story took an interesting turn with this episode of Ishq e Laa. From now on the Azlan and Azka will perhaps be the main focus. While I am still interested in Azlan’s track, even after Azaan Sami Khan’s average performance tonight, Azka’s track has completely failed to impress. She is giving the viewers mixed signals for now! Also, I feel that even though Azlan did not have a strong faith in Allah, he was gradually transforming into a better person. The writer perhaps should have kept the negative elements of his personality alive right till this point in order to make people relate to the “lesson” he is about to be taught. Surely, he still has a lot to learn, and eventually, this loss might be a blessing in disguise for him. I just hope that Azaan Sami Khan will do justice to the character since the focus will be more on Azlan now than ever. I am looking forward to what the writer has in store for us next. The camera on the scene of the crime must have captured everything; will Azlan and his father succeed in getting Shanaya’s murderers punished? In which circumstances will Azlan and Azka meet next? I am waiting to find out.