This was another entertaining episode of Ishq e Laa which was for the most part convincing. There were however some scenes and scenarios which could have been shown in a more convincing manner. Tonight’s episode also showed different shades of some of the characters. The fearlessness of the female protagonists is already coming across as their weakness. This drama reminds me of Alif Allah Aur Insan. I have a feeling that Azlan’s character might have a journey similar to the one Mikaal’s character had in Alif Allah Aur Insan. Azaan Sami Khan’s performance in this episode was more convincing than it was in the first two. This drama definitely has a different feel to it. Watching Yumna Zaidi and Sajal Aly together in a drama is nothing short of a treat. Even though Azka’s character has been crying endlessly, her feelings have been reflected well through her dialogues which make her state of mind easier to understand. Azka’s dialogues about the difference between the rich and the poor were my favorite from this episode.

Tonight’s episode opened with yet another confrontation between Azlan and Azka. There has been a great deal of focus on these two, sometimes more than Azlan and Shanaya. The fact that Azlan’s mother asked Azka to serve Azlan and his friend even after that incident showed that she lacked foresight. Even though she comes across as a decent woman who respects her house staff, she is incapable of holding her son accountable. She apologized to him for questioning his actions and in a way told Azka off, later on. I must say that Ghazala Kaifi was not too comfortable delivering some of the dialogues which took away the impact which this scene should have had. Even the scene in which Azka tells Azlan to shut up wasn’t impactful enough because of the camerawork. I am glad we got to see different shades of Azlan’s character in this episode. Even though the most prominent trait of his personality continues to be his inflated ego, he has a definite likeness for Shanaya, and perhaps that is what Shanaya finds attractive. 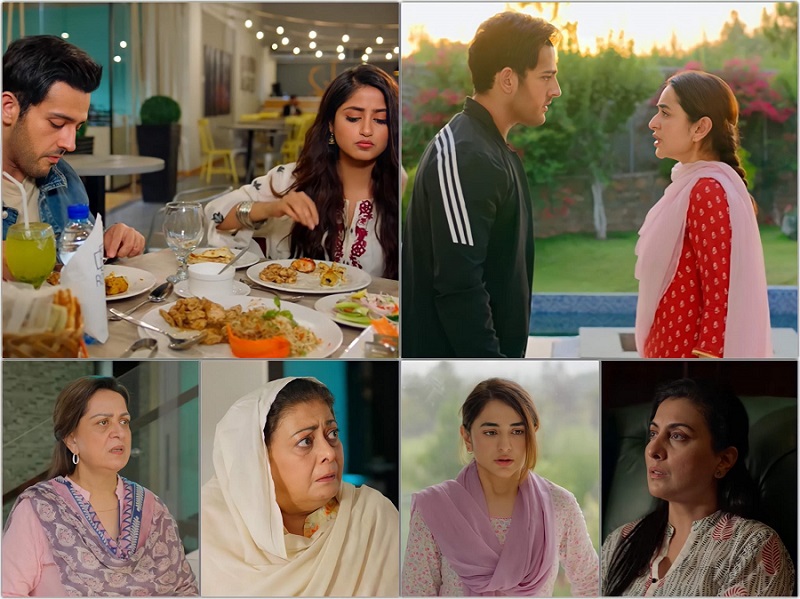 Shanaya and Azlan are best friends yet somehow she does not see all the flaws in his personality as a ‘problem’. Her dil ke hatho majboor dialogue yet again suggested that she was head over heels in love with him. We all know by now that Shanaya is impulsive and like Azlan said she has her own set of ideas that are far from reality. She follows her heart therefore perhaps that is why she ignores all the red flags! In the previous two episodes I had a really difficult time understanding why this girl was in love with someone like Azlan but tonight their relationship seemed to make some sense. Azlan does not ‘love’ Shanaya but he does give her a lot of attention and time. Some of Shanaya’s dialogues suggested that she realized that Azlan had this toxic side but she did not see that as a problem. She is clearly an open-minded person who does not judge people in general. That is why she went to apologize to Azka but then she also did not hold back when she felt Azka was being unreasonable.

Even though Shanaya loves Azlan, she makes sure that her career is not sidelined in any way because of him. Shanaya’s fearless nature isn’t the most appealing part of her character but I am glad that the writer has made it clear why she is not afraid of speaking her mind and questioning the wrongdoers. Also, it is always refreshing watching working women with an actual aim in life in dramas!

Even though tonight’s episode of Ishq e Laa was not faultless, I enjoyed watching it. It is interesting that all the characters so far have a life other than their interactions with each other! Watching a working woman as one of the main protagonists is another aspect of the drama which I find appealing even though Shanaya’s fearlessness is somewhat annoying! The dialogues in this episode were not too heavy-duty but meaningful. Also, I like the way the writer has been using situations to show different perspectives. The opening scene for example showed how differently Azlan and his mother perceived and reacted to the situation. Azlan could not see Azka’s injured hand because he was too busy holding her accountable. I am definitely waiting to find out where the journeys of these characters go from here because all these tracks have so much potential. Why are Azlan and Azka’s confrontations getting so much attention and screen time? Where is this track leading? Those were some of the questions in my mind after watching this episode. Most of the performances tonight were impressive. Yumna Zaidi was outstanding in the confrontation scene. Sajal Aly is a phenomenal actress who never fails to impress. Apart from the main leads, Laila Wasti and Seemi Raheel gave the most realistic performances.

Did you watch tonight’s episode of Ishq e Laa? Share your thoughts about it.