The latest episode was a little slow-paced as compared to the preceding ones because a significant amount of screen time was reserved for showing the strain in Dua’s relationship with her parents.

Dua’s conversation with her friend, Rida went to show that as ironic as it is, amidst these troubled times the people Dua trusted the most have left her all alone but the person she has just met is the only one standing by her side. It’s crystal clear by now that Dua knows only too well how Zohaib can give her the love, respect and protection that Hamza simply can’t. She doesn’t want to part ways with Zohaib but it seems like she just can’t muster up the courage to admit it aloud. Pasha Sahab believes that when Dua fell in love with Hamza, she was too immature to judge what’s better for her future. Being a father, what he said did make sense but it’s a little insensitive of him to expect Dua to get back to normal so soon. Like I mentioned before, the whole emotional-blackmailing fiasco has received unnecessary screen time so I don’t want to see any more of this in the next episode. I’d have to say it this week that Armeena Rana Khan’s acting left much to be desired- she was delivering her dialogues in a deadpan tone.

”Rishtay sirf naam kay nahe hotay. Un kay haq bhi ada karnay hotay hain.” When I view what Hamza’s been through, I can’t help feeling sorry for the poor guy- haha OK, he’s not that much of a pour soul but considering how he has lost the most important people in his life, I understand that it’s actually his circumstances that have made him the way he is. It seems like he has a plan brewing up in his mind but it hasn’t been revealed yet so I guess that’s one of the many things that will unveil next week. 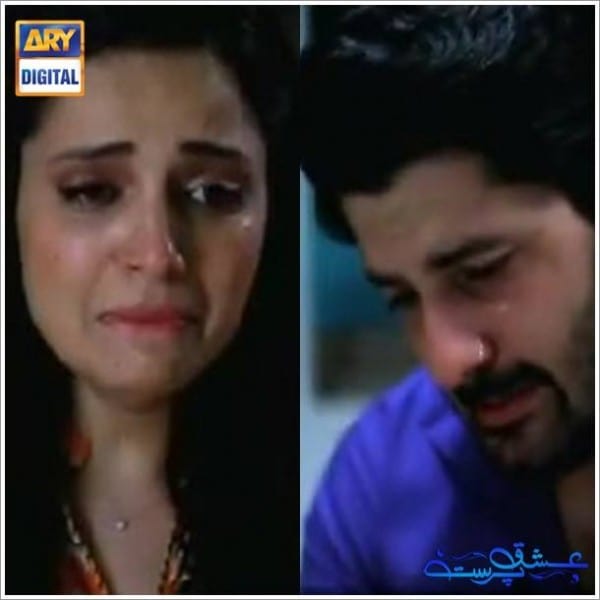 Coming to Dua and Zohaib, I must say that some of the developments relating to the two of them took me by surprise because this time around, Dua was the one avoiding the topic of divorce and we could see her warming up to Zohaib :D. Zohaib kept bringing up the divorce issue because I guess that was his deliberate attempt to pinch Dua and that’s exactly why he pointed out how this divorce will affect Arsala’s life. The final scene of the episode was yet another skilfully directed scene. Dua crying, Zohaib becoming teary-eyed and spilling chai on the divorce papers- everything went to show that ending this relationship just like that is NOT what they want because these two belong together- they’re too afraid to confront each other about it and declare it aloud. And of course, Jibran totally nailed it- he just gets better!

I am happy with the way they show how Arsala plays her part to make sure that things are smooth and steady between Zohaib and Dua. Arsala’s a perfect example of a modern & educated nund. I was looking forward to seeing more of Dua and Arsala’s scenes because they were perhaps the only lighthearted scenes of this episode. From her tantrums to demands, everything about Arsala goes to show how immature and childish she is and if Hamza’s plans have something to do with Arsala, then I am pretty sure she will fall for it big time :/. Let’s see what happens next. What do you think of the latest installment? Share your views, please!