Opening Thoughts – What An Episode!

Ohkay so, this entire episode of Ishq Zahe Naseeb was on another level but what made it special was the cliffhanger that the writer left the viewers with. One scene added a whole new dimension to the story & now we are left thinking about the possibility of Shakira being alive. Hashim Nadeem should be very proud of himself for giving the viewers a completely different story. It makes me so happy that we have a writer like him who is capable of bringing such unique story & characters. This entire episode was perfectly balanced & covered all the aspects of both Sameer & Gauhar’s lives perfectly. The director also deserves full points for directing Ishq Zahe Naseeb brilliantly.

The Closure & The New Beginning:

Kashif & Gauhar’s meeting was one of my favorite scenes of tonight’s episode of Ishq Zahe Naseeb. They both had moved on their lives but emotionally they were very much with each other & were trying hard to convince themselves otherwise. Gauhar was genuinely happy to see Kashif doing so well for himself, it is because the time she spent with him made her aware of the fact that he had so many responsibilities being the only son of the family, so she connected the dots & felt happy for him. They were at the verge of telling each other that they both didn’t show up that day but they didn’t, which obviously left Kashif thinking more about what Gauhar was trying to say. All this while, Kashif has seen himself as the culprit for leaving Gauhar in the lurch & similarly, Gauhar holds herself responsible for turning her back on Kashif. I think they both will have to wait a little longer before they find out the truth. The moment where Gauhar left because she couldn’t hold her tears was beautiful, she has convinced herself to put on a brave face in front of Kashif & she wanted to stick to that.

Sameer realized that there was obviously some past that both Gauhar & Kashif must have shared. The scene where Sameer let his complexes & his yearning to be loved get the better of him was so heart-wrenching & done so so well. Sameer longs for love, he longs for undivided attention – all this while he thought he got it from Gauhar but seeing Kashif in the picture made him anxious. Sameer can not lose Gauhar, he just can not, that is why the very next day he decided to give words to his feelings & let her know what was in his heart. I must say, Hashim Nadeem has given a perfect treatment to Sameer’s character where he has not once made him look like a villain, in fact the way Sameer’s journey has been covered so far makes me feel for him. He has had a rough childhood, a twisted step-mother to deal with, his father passed away & then things were never in his favor from a tender age, so for him just the thought of losing Gauhar was unimaginable. Sameer played his cards well. 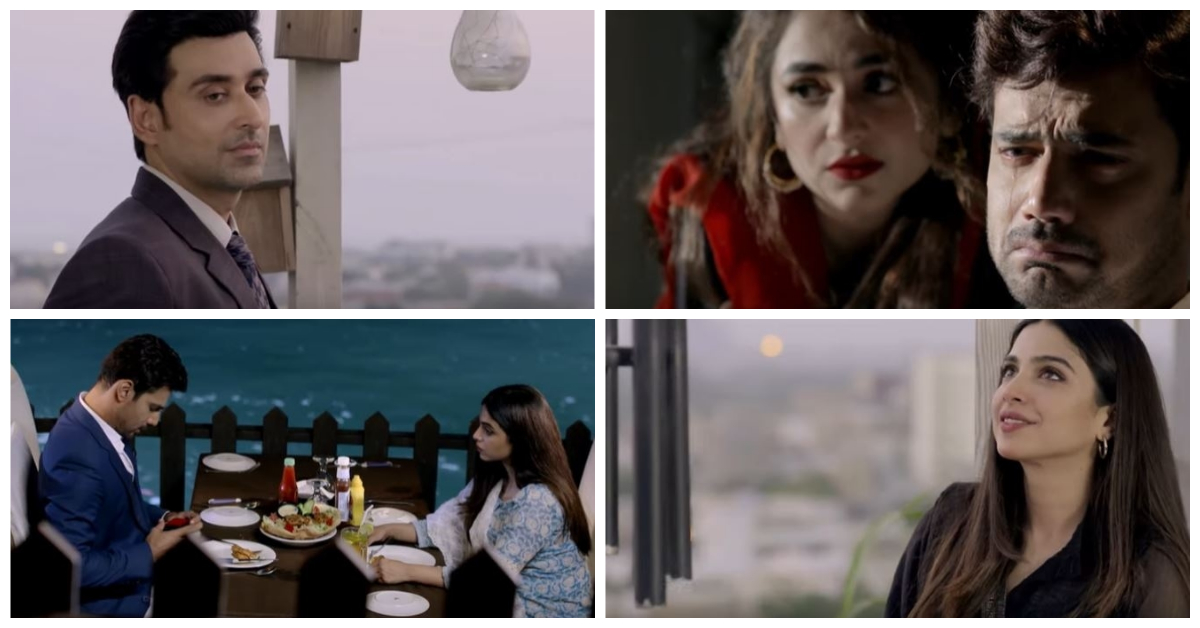 The proposal scene was intense & all the expressions given by Zahid Ahmed were spot-on. Sameer was unsure of what Gauhar’s reaction will be, he wanted her to say yes, he couldn’t wait & then seeing Kashif witnessing that moment also made him anxious but Gauhar’s acceptance was enough to overcome all his fears. Those minute expressions of happiness & relief were brilliantly portrayed by Zahid Ahmed. At that moment I actually felt good for Sameer but yes, he is hiding a huge secret from Gauhar & that obviously makes this entire equation a little complex & difficult but it will definitely be interesting to see how Gauhar will take it.

Jahangir & Co’s scene was thankfully short but I once again found it extremely amusing the way his father dealt with all his friends. Saleem is getting on my nerves to be honest, it is sad to see him dancing to his wife’s tunes so much that he doesn’t mind striking a deal with Sameer every now & then, only because he knows that Sameer is interested in Gauhar, ridiculous. Well, Saleem would’ve never imagined that Sameer will also have a condition & I feel more than it being about his mother, Sameer definitely wants his secret to remain a secret & he knows that after his wedding, he will have to face Gauhar’s family every now & then, that too in the evenings & that is something he can not afford. I kind of enjoy seeing how Sameer is always very much on top of his game all the time, like considering the emotional & personal baggage that he has, one might expect him to be a little lost or spaced out at times but Sameer never goes into that zone & stays pretty focused always, which makes his character even more interesting.

Kashif & Gauhar’s phone call was nice. At first I felt Kashif was behaving recklessly, especially now when he knew that Gauhar & Sameer were going to get engaged but then I was reminded that they both did not have a proper closure, they just lost contact & never heard from each other, therefore it is perfectly fine for them to have a conversation or two to end everything properly. Kashif reminded Gauhar about all the things that the woman had said to her at the Shrine, which means although Kashif didn’t believe in her prediction before, he wanted to now. Kashif probably analyzed the way his & Gauhar’s life panned out, that is why he kind of felt he had a reason to believe the things that the woman had predicted about their fate.

The very last scene was intense & I am sure it has left all the viewers baffled & intrigued at the same time. Did Sameer see Shakira committing suicide & now is he feeling perplexed about not knowing whether she died or not? The woman that Gauhar met – she saw a picture of Shakira in the basement & based on that she deduced that the old lady was Sameer’s mother, it is like she mistook Shakira as Sameer’s biological mother because of the photo. Is Akbar Shakira’s brother? May be Shakira didn’t die. It also makes sense that the butler must’ve brought his sister as Sameer’s governess when he was young – it seems more realistic & befitting that Akbar being one of the house helper must’ve requested Sabeeha to give his sister Shakira a chance to take care of Sameer & then Sabeeha must’ve allowed that? Knowing the kind of controlling person Sabeeha is, it makes sense that she would’ve gotten rid of all the photographs of Sameer’s biological mother, so yes, the picture that Gauhar saw in the basement was of Shakira & Sameer & because of that she thinks Shakira was his mother – the wheelchair-bound lady that she saw at the hospital some time back. All of this has become quite interesting & I can’t wait to find out more.

Overall, this episode of Ishq Zahe Naseeb was brilliantly directed & acted out. It is actually quite amazing that even after all these episodes, the writer has so much in store for us. Every single episode offers one thing or the other. One scene is enough to change the thought process & it is like the writer is revealing the cards one at a time, at the right time. Ishq Zahe Naseeb has turned out to be one such drama which deals with not only just psychological disorder but so much more in such an interesting manner. This drama gives a well-rounded perspective of the main character Sameer’s life & his personality which is definitely new. Zahid Ahmed once again stole the show with his phenomenal performance & perfect expressions. Sonya Hussyn, Sami Khan & Zarnish Khan have done a brilliant job as well. In the initial part, I found most of the dialogues dubbed, which immediately affected the feel of those scenes but then as the episode progressed, it settled. I felt that may be they wanted the dialogues to be louder that is why they resorted to the dubbing & the only thing I enjoyed was that the background score was toned down in those scenes. In the rest of the episodes the audio was fine & I also liked that they kept the background score to an absolute minimum in most of the scenes. I really hope they tone down the background score even more in the rest of the episodes because it gets a bit too much. This episode of Ishq Zahe Naseeb was phenomenal & I can not wait to find out more, I hope they show us the conversation that Gauhar & Akbar had probably 3 episodes back soon. Please share your thoughts about this episode of Ishq Zahe Naseeb.