Ohkay so, this episode of Khud Parast was again very interesting & intense. The credit definitely goes to the director for executing it in such a way that every single scene, every single conversation struck a chord. However, I totally understand that the writer has a purpose behind bringing this storyline to the table but I do not think it was necessary to show Hijab as a symbol of oppression where it was imposed on someone who did not understand its value, importance & the wisdom behind this commandment for women. When it comes to Hijab, the widely accepted notion is always that of an oppression so to further elaborate it is a kind of an insult to those women who wholeheartedly & on their free will wear it that too with pride. Dramas like Khud Parast may have a purpose of their own but the general message that is usually conveyed through them is wrong on so many levels. Anyways, if we stick to the one-sided picture that is being shown, then I will say that the drama-makers have done a commendable job.

Uswa Has a Long Battle to Fight:

So, slowly & steadily Uswa started changing herself & while doing so, she also started learning about how things actually rolled in Hanan’s house. Everything was obviously a shock for Uswa because even though she came from a relaxed & unorthodox background, there was one thing which she didn’t grow up with & that was hypocrisy which was now prevalent in Hanan’s household. Uswa changed herself to fit Hanan’s demands but only because she genuinely loves her husband & can see that he is a nice person but yes, she was unable to relate to him on a lot of things because they both have been brought up very differently.

For Hanan, all the things Bakhtawar said were very normal but for Uswa, it was not. Hanan has gotten used to this environment & because he was raised in such a setting, it is very difficult for him to break free from what has been brain-fed to him for so many years that is why, he continued to do what he believes is right without considering what Uswa was going through. Hanan may be nice but for him, it is a done deal that it is his wife Uswa who has to do all the compromises, she has to change, she has to adapt to the new lifestyle & while she is at it, she is not supposed to question. However, Hanan did keep his conversation open with Uswa & even though he snubbed her, he still did allow her to say what was on her mind. Hanan won’t be able to change or do much till his mother will keep on pushing him to act like a typical chauvinist. 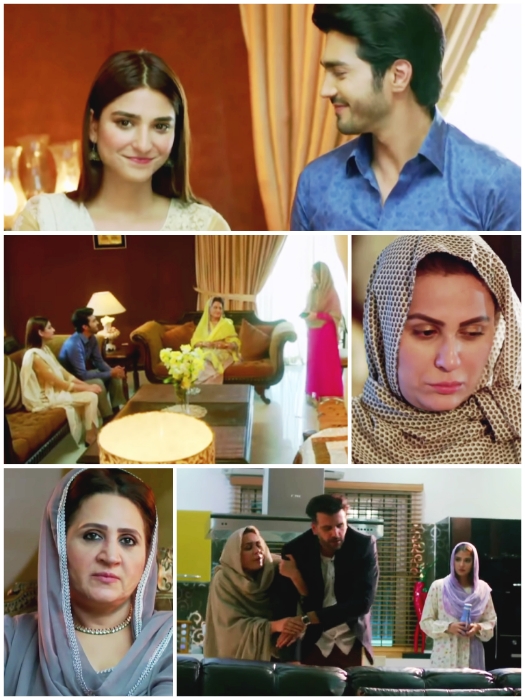 Uswa’s sisters in law are up to no good. Now that they got rid of her, they should stop being so salty to add more to Uswa’s woes. Uswa’s Bhabhi now wanted Uswa to pay the price for what she has done in the past which was wrong. What Khatoon Bibi did was basically what was expected from an uneducated woman who hails from such a background where they’d do anything to make the ends meet. Bakhtawar got another chance to malign Hanan’s heart against Uswa & it definitely worked.

That scene where Hanan crossed the line with Uswa was depressing but done well. I liked how in that situation very calmly Uswa conveyed everything to Hanan & he just left it at that. Hanan did feel bad & try to make it up to her which shows that he does not believe in mistreating Uswa like his brother Moeez but he has issues with self-control. Uswa is getting one eye-opener after another where she is only left wondering about everything that is wrong in this household. Uswa witnessed Moeez’s condition when he was drunk & that is when she actually realized that Bakhtawar was full of double standards where she didn’t believe in keeping a check over her sons but was controlling her daughters in law like her slaves. Uswa’s dialogues were written well & I liked how she told Beenish that her attitude was empowering Moeez to do all this to her.

Uswa does believe that she will change Hanan, she will change the dynamics but every single time she gets a reminder that she should not underestimate Bakhtawar & her control over her sons. Uswa definitely has a long battle to fight ahead. I will say that even though Maria’a dialogue at times do sound bizarre & shallow but it shows how people from the outside think the grass is greener on the other side. Maria is unable to even understand what Uswa is going through because she can only see the luxuries her sister Uswa has in her life.

Overall, this episode of Khud Parast was very interesting with some amazing acting skills displayed by Ramsha Khan, Asma Abbas & Shehzad Sheikh. I loved Ramsha Khan’s acting in the very last scene where Uswa stood there numb in disbleief that Bakhtawar was not allowing her to spend a night her mother’s home & then she had this hatred in those expressions too where she wanted to punish Bakhtawar but was unable to do so. It was interesting to note how Bakhtawar was not making an eye-contact with Uswa as she knew what she was doing to her was not justified. The direction of this drama is really good. Small details like how Hanan & Bakhtawar’s picture in the background was used to suggest her control over him when he was being violent towards Uswa, make this drama very interesting watch. Definitely looking forward to the next episode. Please share your thoughts about this episode of Khud Parast.