Okay, so, this episode of Khuda Aur Mohabbat 3 was quite happening. I will be honest, I had high expectations from this drama & anticipated that the story is going to be quite different, but as the episodes progressed & it turned out to be quite typical, it resulted in me being disappointed. I am glad that the drama is in its final stages & the story is wrapping up, but somehow I still feel it has not been shown in a convincing manner. The acting of all the actors, the direction & production value, everything on its own has been great, but when put together, there is a lot that is missing which is unfortunate.

It was interesting how the writer showed Romana in a positive light again. She has a lot of principles & she cannot think of doing wrong. The writer made sure to let everyone know that her intentions were pure & she only went to see Jageerdarni so that she could save Mahi from a life full of sacrifices. I think it would’ve been a lot more believable if Romana had actually met Jageerdarni to plead for her marriage to Sikandar, while also letting her know that Mahi loves Farhad. All of this could’ve happened without turning Romana into a spiteful character, at least it would’ve been quite human of her to expect something out of this too considering how miserable she has been without Sikandar. The way Romana has been placed on a high pedestal of morality, principles & selflessness makes her character a bit hard to digest. Chanda on the other hand looks real in her comparison at least!

The entire scene between Nazim & Farhad was so forced. The way Nazim intimidated Farhad that too with his own hands tied literally defeated the purpose of this interaction. It was amusing that the man who was so touchy about his family’s ghairat & izzat didn’t think once before saying Mahi’s name out loud in front of all those random men he took with him to scare Farhad? I am glad Farhad looked at all of them only to imply how shallow Nazim’s approach towards this entire situation was. Nazim Shah is another character that lacks depth & to be honest purpose because of the way it has been treated. The acting & the way he shook with anger was just so OTT that I had a hard time taking him seriously. 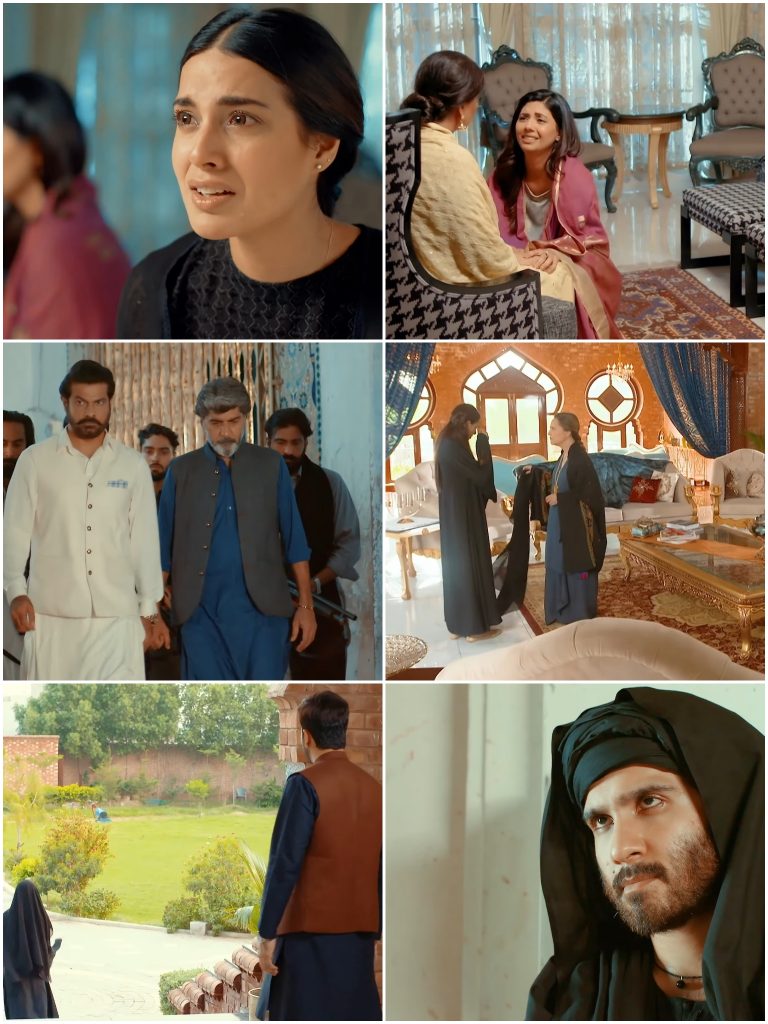 As much as I like how Farhad is always himself when he interacts with Mahi, it would’ve been nice if he had dealt with Nazim a bit differently. Telling the brother of the girl you love to question her is such a typical boyish behavior, showcasing that you’re not ready to take any responsibility & wants her to be questioned too. It made it look like Farhad was also putting a blame on Mahi that she comes to see him & he is not at fault. When Farhad looked at the men he was surrounded with, I thought he will ask Nazim to not blurt Mahi’s name so callously. This was the kind of evolvement I expected from Farhad’s character – at least at this stage of his journey. He chose to behave exactly like he would have while he was in Lahore so it does make one question what is it in him that has changed? Nothing I guess!

Mahi’s mother finally realized how out of touch with breath & reality she has been all this while & I am glad she did. It was sad that she was blaming Fakira as if she herself was free from all the responsibility she had as a mother of Mahi. I am not holding her accountable for not keeping a check on Mahi, but this serves her right for not being an emotionally available mother who had stood by her daughter. Even now she was concerned about Jageerdarni’s reaction, while completely ignoring the pain her daughter was suffering. As I said in the previous review, if Farhad or even Mahi had done something or retaliated in any manner, these reactions would’ve made sense, seeing the entire family react only because Mahi & Farhad have had feelings for each other makes this entire situation so bizarre, unnecessary, unconvincing & forced. Mahi is minding her own business & so is Farhad, they both love each other from a distance, without expecting anything in their lives to change, so why is their family losing their sleep over this mere fact. It is funny to think that just because they are overreacting, everyone around them is now finding about something which could’ve been well kept a secret!

I must say I am impressed by Dervish. What is it that he can not do? He can predict the future, he can see the past of any human being that walks past him & just when the director thought the viewers were kind of forgetting about his special powers, we were shown that W&D Dervish can teleport too. I was actually wondering when & how did he come back because Farhad didn’t see him entering the room, he vanished into thin air. How amazing!

This episode was definitely better than a lot of previous episodes. However, it is unfortunate that the story in itself is so mediocre & the characters have shown absolutely no growth that makes it easier to find logic in what is elaborated. My favorite moment of this entire episode was seeing Sikandar hide behind the wall, I mean Romana showed so much courage, the least he could’ve done is hold her hand & tell Jageerdarni that he wanted to be with her. He has been such a coward character that makes me pity him. He would literally search the entire city for Romana, but will not take a stand for her in front of his mother? How twisted is that! Good acting by Iqra & Feroze. I must say for girls who are struggling financially, Romana & Chanda’s wardrobe is really nice! Please share your thoughts about this episode of Khuda Aur Mohabbat 3.