All of us figured out instantly that the last scene of the previous episode was a dream sequence but none of us thought it would be Mahi’s dream! The fact that Mahi dreamt about the “confrontation” and Zain trying to strangle Noor made a lot more sense than Zain having this dream. It went to show Mahi’s insecurities and what she thought might happen if Noor and Zain met. The next scene showed Zain crying which once again showed that sometimes weak people suffer more than those individuals who are strong but in a very different manner. Zain never had the courage to accept his child or to share responsibility with Mahi and he also failed to find peace because he has always been confused. Zain’s character is not negative but he has a lot of flaws which he tried to overcome but he couldn’t. He does not have a strong personality like Mahi which is why his mother manages to brain wash him quite often. Also, he tried his best to accept his child but it was beyond him. He did not have the courage to face the world. After these two opening scenes, Noor was seen fighting his demons. The scene in the football field, like many other scenes in this episode showed that Noor was fighting his own battle. All those people who are directly associated with Noor are fighting their own battles in different ways and all of them have friends or family members who have been there by their side. Hassan comforted his son and Mikael comforted Noor, so did Mahi and Zain. I must say that I missed Mahi’s mother in this episode.

The scene covering Noor and Zahir’s meeting after Noor found out that Zahir was his chachu was quite emotional. Although some of the scenes in tonight’s episode lacked continuity but there wasn’t a single scene covering Noor’s track in particular which was not effective. Furqan Qureshi’s performance has made his track even more appealing. He emotes really well and is a confident actor. Imran Ashraf is another actor whose acting has been very natural throughout and the only actor in this drama who looks like he has aged! Rest of the actors have not even changed their hairstyles to give their characters a different look although all of them have performed brilliantly throughout. 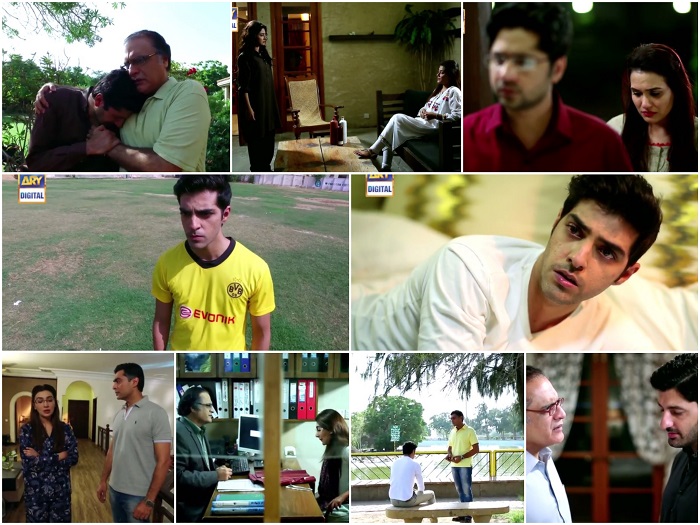 Noor and Mahi’s conversations in this episode were just as emotional and poignant as every other episode. There are times when it is difficult for Mahi to continue to be strong but most of the times she has been a fighter. Noor’s grandfather once again showed the desire to meet him, something that showed that unlike his son he had accepted Noor as his grandson. Right now, I am looking forward to the time when Noor finally meets his father. The preview of the next episode suggested that this meeting will eventually take place next week.

The best part of this drama is the way in which the relationship between all the characters has been established. Also, the positive character in this drama are not flawless, they are human, which makes it easier for the viewers to relate to their characters. Even with all its flaws, the weaknesses in the script and the direction, Khuda Mera Bhi Hai continues to hold my interest and it is one of my favorite plays. All the actors own their roles completely which is also another reason why their characters are easy to relate to. The story isn’t grand but it is poignant.