This episode had some powerful performances to its credit but tonight’s episode of Khuda Mera Bhi Hai was more of a filler episode which was high on emotions but did not have much to offer in terms of story development. I had absolutely no trouble relating to what Mahi was going through, Aisha Khan’s brilliant performance and effortless portrayal was right on point but there were many times when I was wondering what is taking Mahi so long to figure out that she has the option of raising this child on her own. It is not an easy decision to make for any mother but then Mahi was never shown as a conventional woman. The scenes covering Mahi’s state of mind were poignant without a doubt and she will eventually come to a decision which will be her very own but in my opinion it would have been so much better if she made that decision in this episode. Also, watching every single person including Mahi’s mother, Zain’s father and even Sanam accept this decision like there was no other choice was somewhat awkward too.

I have read many interviews of people born with such birth defects and most of them never really fit in a family and end up with people who are like them but even then it is difficult to digest the fact that Mahi did not protest enough considering that she never thought of consequences when she was making difficult decisions for others. The fact that Mahi decided to take responsibility for a girl who was not even related to her went to show that she was not afraid of taking responsibilities and was quite independent. This side of Mahi’s character which we saw in the previous episode and this one is quite different from the Mahi we were all introduced to. She will eventually bounce back but this should be done soon otherwise the team of Khuda Mera Bhi Hai will only be relying on the emotional aspect of the situation and not focusing on a more plausible narrative. 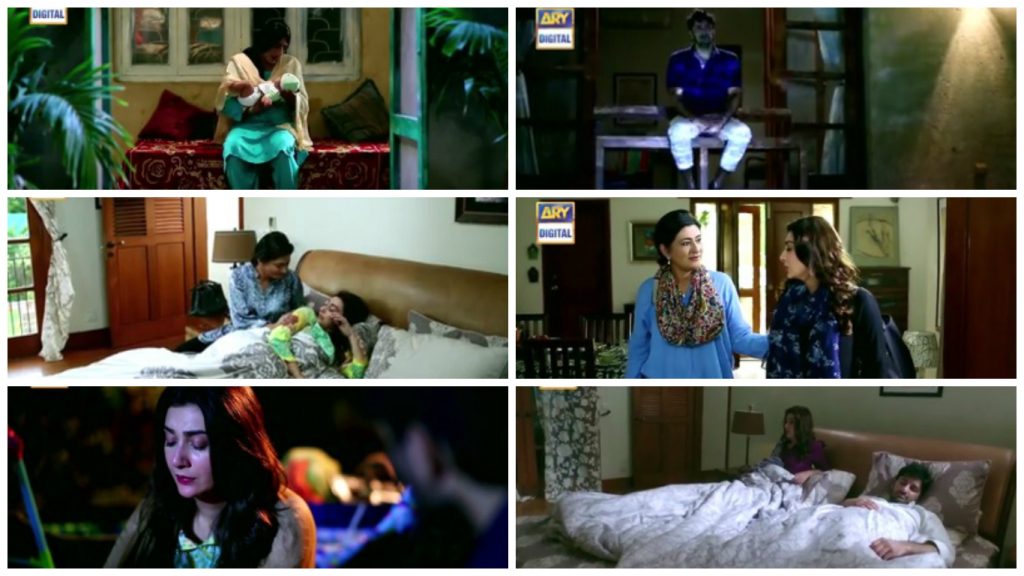 Arshi got way more screen time than she should have in this episode. Her character is not likeable and most of her scenes conveyed the same message therefore they were repetitive. It was shocking watching Mahi’s mother leave the first time without meeting her daughter and I expected an emotional outburst when she came to meet Mahi but the scene was much more subtle, which isn’t always a great idea. Watching this entire family giving up on this newborn baby because he was not like them was truly upsetting and heart-wrenching.

I am all for directors who pay attention to details which make a drama esthetically pleasing but sometimes “compromising” on such aspects can help a situation. While Aisha Khan’s acting was truly impressive in tonight’s episode, her perfectly styled hair and heavy make-up stood out like a sore thumb. Syed Jibran’s matching shoes when he was sitting next to the pool and crying was not a coincidence either. I did not understand the conversation between Zain, his father and Zahir next to the swimming pool. How did they know what they said to Mahi?? All the actors in the play including Mehmood Aslam were wearing a lot of make-up in tonight’s episode. There was generally too much focus on making the actors look good although their lives are completely chaotic at the moment. Adnan Shah Tipu is one of the most versatile and talented actors in our industry and once again in this drama he has proven he can perform any role at all effortlessly.

Although this episode wasn’t my favorite episode of Khuda Mera Bhi Hai but I must admit that it was emotionally engaging, especially the scenes which covered Mahi’s state of mind were heartrending despite of the heavy make-up. The preview of the next episode suggested that things will take a turn for the better in the next episode. I am waiting for Mahi to take a decision so that we can watch fighting for her baby.