This episode like the previous ones was decent paced, moving the story along in a convincing manner. Aina seems to have grown a thick skin where all she cares about is herself and Imran. She plays on the feelings and trust of the family that loves her and her expressions and then chat with Faraz after he manages to convince Mohsin and Aina’s mother to continue with her studies made me wonder at how selfish this woman is. At the risk of repeating myself, for the drama’s sake and even reality to an extent I can easily stomach liking someone and then marrying them when your family disapproves which is probably where Imran is coming from. I will come to Imran later. But Aina’s family set aside their reservations for her sake and it was Imran’s side that let her down so even if Aina were to marry Imran against her family’s wishes and kept it a secret, she should not be playing on everyone’s feelings. She convinces her fiancé to buy her a few more months before the wedding because she wants to study. Having Faraz and Sajal speak for her and mostly not care how she will let down her mother does not make Aina very likable. She had a couple of moments where she whined to Imran that she can not keep lying but even then it was because she wanted to get over with the secrecy, it was all me-me-me.

Faraz’s two facedness is still understandable for his family played with his emotions and led him to believe one thing while they went and did another and then emotionally blackmailed him. Yes, he should be man enough to stand up and face the music but for whatever reason he wants to keep things shushed for a while. His mother’s divorce factor surely can not be the reason for once his family finds out then what will happen? Maybe that is his plan to keep this marriage hidden for a longer period than Aina would have wished. 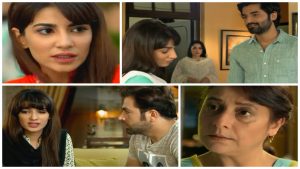 Anyway, does not matter what Aina and Imran want or plan for Ainnie has bigger plans for them. Imran’s disappearance daily from work makes her suspicious and I remember describing her as stalkerish but man, this woman turns out to be a total stalker. She honestly puts all the desperate, I-must-have-this-man-even-though-he-clearly-does-not-want-me female characters in our dramas to shame for they may scheme and scream (ah, that rhymes) but I can not say Ainnie does not make things exciting. She not only follows Imran but then confronts him and Aina and while the whole ‘what is your rishta’ scene grated on my nerves for it played out far too long and I felt like shouting someone say something already, she provoked Aina enough to blurt out that she and Imran are married. Although Hira Adnan’s dialogue delivery is a bit off, her desperation is convincing and there was quite a bit of her flouncing around in those strange clothes – maybe I am not with the latest fashions but to me she looked like an angry peacock! 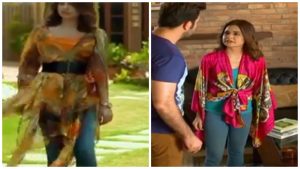 Imran’s father still seems to believe or maybe that is another one of his games, that now Imran has had his fun he must divorce Aina. Will Imran be able to take a stand for himself and Aina or will he succumb to pressure? More interestingly for me, will Imran’s father or maybe Ainnie pay Aina’s family a visit and update them with these developments?

There was much less of Sajal-Faraz and Mohsin-Nadia today but for me that worked for it moved the main story along where now Imran and Aina’s secret has come out into the open. There is nothing reassuring about Imran’s character except his passionate vows but he does not come across as someone who can deliver and I wonder if that is really the character that is Imran or maybe the actor gives that impression. We shall soon find out I suppose. While the story, well the jist of it does not seem unique it does not seem very predictable either for I did not expect Ainnie to find out and confront Imran so soon. The fact that this drama airs twice a week also makes it interesting except for some reason, a new episode did not air today. What did you all think of this episode? Would love to hear your thoughts.