Seriously. I am amazed at how Jahanzeb has not managed to share his feelings with Bari Sb. Everyone seems to be passing the buck with Zainab hoping Jahanzeb will speak up or Shahzeb will refuse to marry her where Jahanzeb wants Zainab to say no to Bari Sb or hopes Shahzeb will. In the end only Shahzeb was able to voice his feelings and head out to take action but that failed too.

These two episodes focused on the seemingly inevitable marriage of Zainab and Shahzeb and Mannat’s ‘predicament’. Bari Sb thinks Zainab is interested in Shahzeb with her constant hints of not wanting to leave the haveli and given she does not like Alisha either, she feels that having Zainab marry Shahzeb would be a wonderful idea. Alas, nobody else shares her enthusiasm. Shahzeb tells Bari Sb he will not marry Zainab and prepares to leave but the emotional stunt that Bari Sb pulled had him weeping and falling to his knees and in that moment of weakness, she makes him promise to honor her words. I felt bad for Shahzeb then and wondered at Bari Sb’s mamta for she knows Shahzeb is unhappy with this match yet she resorts to such drastic measures to make him succumb. She further impresses upon him that he must appear to act that he is very happy with this match and it is what he wants. I know Bari Sb is ruthless but she always came across as a woman who loved her sons, niece and grandchild (well not too sure about the grandchild for her decisions regarding Mannat seem questionable to me, but oh well)! 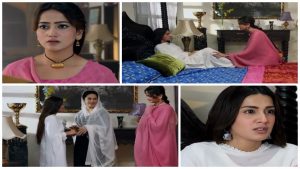 Zainab and Jahanzeb are taken aback at this change in Shahzeb and Zainab even confronts him but Shahzeb stays true to his word. I know Bari Sb expects the ‘daughters of the haveli’ not to have any opinions but I wonder how awful could it be if Zainab said she wanted to marry Jahanzeb? Bari Sb thinks Jahanzeb is not a fitting match for Zainab since he is older and a widower so it would be unfair to Zainab. Also, her thoughts regarding what ‘people will think’ are contradicting her image of a woman who earlier tells another woman to throw out her worthless husband for she can earn her own living and must not put up with his nonsense. Bari Sb clearly does not practice what she preaches or does so selectively it seems.

Jahanzeb is another confused character. He has moments where in his mind he is passionately vowing to make up for all the misery he has put Zainab through and then he feels he is not good enough for her. I think it is his cowardice which prevents him from speaking up and in that sense maybe he is not deserving of her indeed!

Mujhay acha lagay ya bura, hona wohi hai jo meri kismet mein likha hai. Seems like Mannat is the only one who knows crying or having an opinion or feelings will not matter in this haveli. She seems to be a bit too easily resigned to have Bari Sb and others decide her fate but then given how Shahzeb’s situation where he tried to ‘do something’ was dealt with, then maybe she is not too far off the mark either! Bari Sb is planning to have Mannat’s baby aborted so she may rob Sikander of an heir but wants Zainab married off quickly too so that she is not ‘available’ as an offering to Dilawer anymore. This woman! Her scheming and ruthlessness knows no bounds. Sikander on the other hand is laying his own plans which failed when his plan to have Shahzeb killed fell through. It did however bring to the limelight our desi Charlie Chaplin who it seems is about to be caught out very soon! 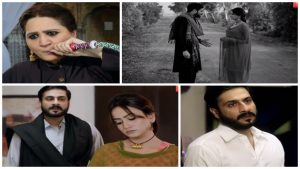 The episode ends with wedding celebrations beginning for Zainab and Shahzeb. I watched these two episodes together so the pace was okay for me. But I feel by the next episode either Zainab should be married to Shahzeb and move the story forward or Jahanzeb finally speaks up (don’t see that happening though!). This drama is not the sort that has you glued to the screen but the colourful visuals, powerful acting by Asma Abbas and heartfelt performances by Zarnish Khan and Kamran Jillani have held my interest. I normally find Mirza Zain Baig’s acting lacking but the scene between him and Asma Abbas was done well and was convincing. I like Laaj but I am still waiting for that ‘punch’ in the storyline for so far there has been nothing out of the ordinary.

Next week’s preview shows Zainab taking matters into her own hands. Wonder where that will lead everyone. How did you all find these episodes? Would love to hear your thoughts!