Our hero maybe out of sight but it will take a miracle to get him out of Shazia and Mehreen’s mind! Mausam has a very weak storyline and the direction is anything but impressive. There is no build up and no climax, the twists and turns come and go without leaving any impact on the viewers. The story moves forward gradually without giving you much to look forward to. I have totally failed to connect to the characters. Saman’s character had tons of potential but the writer killed that potential when she decided to make her holier-than-thou and I don’t understand why all these sidhi sadhi ladies in our dramas have to speak so slowly. Being simple and being dim-witted are two completely different things. Next time one of the drama writers wants to etch-out a simple girl’s character I highly recommend that they add a little bit of intellect to that character too. Smart girls can be nice too, you don’t have to be brainless to be nice! I was shocked when Saman decided to go to the parlor because that actually showed that she really did think that a visit to the parlor will change her destiny! She has tried Biryani and a new hairstyle, I wonder what is next. Magic wand anyone? What was even more shocking was the chance meeting between Hashir’s mother and Saman. I wish Saman and Hashir’s mother would have met somewhere else because it was hard to believe that someone like Saman can afford to go to a parlor Hashir’s mother goes to. Women like Nigar are very conscious about the parlor’s they go to and they are always places with the highest rates. Girls like Saman usually go to a parlor in their locality because they are not that expensive and are accessible.

Shazia got insulted from Mehreen and Nigar left right and centre but the girl is totally besti proof. Nothing these women say effects her, in fact we never even see her giving anything anyone says a second thought even. Shazia is definitely in contact with Faisal and they are upto something behind Saman’s back. Girls like Shazia enjoy keeping men wrapped around their little finger, she did not marry Faisal but she would not want him to get over her either! I hope that we see Shazia paying for everything she did because she does not deserve to be forgiven. 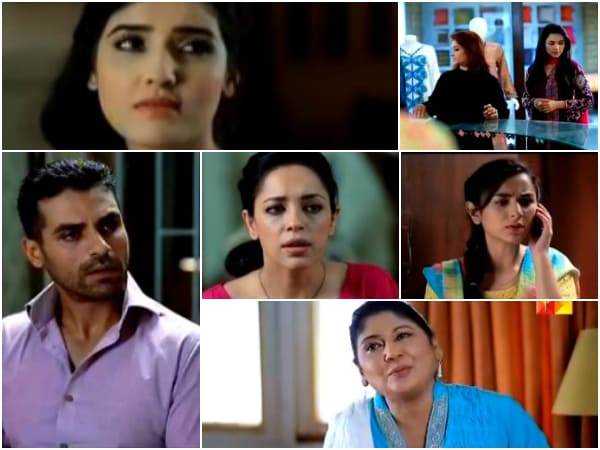 Saman’s mother in law’s character was the only nuanced character in the play but that has changed too ever since she sold Saman’s jewelry. Anita Campher is a brilliant actress but this time around she went over board; her accent is too loud and annoying. Mehreen is a very smart girl, I wonder why she was not able to guess what her father had been upto something when he clearly stated that he talked to Nigar about Mehreen’s friendship with Hashir. That was another conversation that completely fell flat. There is zero chemistry between Shazia Naz and the actor playing her father in the drama.

The misunderstandings in the drama are being stretched beyond limit, the story does not have much to offer and the characters are unimpressive to say the least. I hope it ends soon (wishful thinking)!