This first episode was gripping; it definitely managed to hold my interest and made me look forward to what is in store in the upcoming episodes. Anyone who was waiting to watch this play probably already knows that this drama is set in the 60s and the story revolves around the Pakistani film industry. All the primary characters in the play which are going to be a part of it right till the end were introduced in tonight’s episode. Farhad Sethi (Mikaal Zulfiqar) is a renowned television director who is stepping into the world of films. I must say that in this very brief first episode Farhad’s private life along with his work life was covered flawlessly. Farhad’s love for his wife Jharna (Aisha Gul) was shown in the very first scene but at the same time the gradual shift in his priorities was also covered in a very subtle manner. Jharna feels that her husband is not as excited about their third child as he was about the first two. The obvious reason for this was that Farhad was clearly ‘distracted’ because he is very enthusiastic about his first film. He also mentioned that he did not want another child. Farhad fell in love with Jharna the star and he wants to use her talent even now, he cannot see it going to waste.

Different conversations in this first episode and the portraits/pictures on the walls suggested that even though Jharna Begum is no longer a part of the film industry but she was a super star at one point and she still has a much bigger name in the industry than her husband. Jharna Begum was a multi-talented star who people admired not just because of her talent but also because of her wisdom. The conversations in the party went to show that people were more enthusiastic about the film because Jharna was in some way associated with it and not because of Farhad Sethi. Farhad also relies on the advice of his wife. Farhad might be a big name in television but Jharna is the star when it comes to the world of films. Jharna however has left all the fame behind, she is hopelessly in love with her husband and wants to focus on her family. The way Jharna’s standing in the world of films and her personality in general along with references to her physical strength were conveyed to the audience through different conversations definitely added to the overall impression of the character. 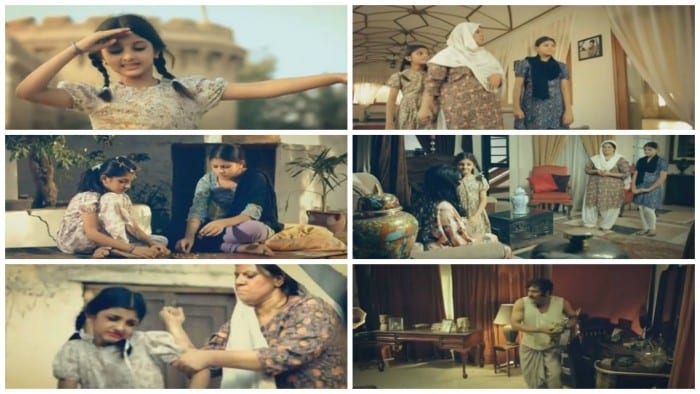 The characters and story of Surraya’s household was introduced just as seamlessly as that of Jharna and Farhad. Surraya’s character instantly caught my attention. Although every girl this age is impressed by glittery things but Surraya is different because even at this tender age she knows how to manipulate situations to her advantage. Surraya has a mind of her own and she knows exactly what she wants to do to keep herself happy. The second she walked into Jharna’s house she knew that if she pleases the woman of the house she will be able to gain access to television, music and make-up!! In a short span of time Jharna started trusting Surraya so much that she asked her to look after her kids when she was leaving for the hospital and later on too she trusted her with taking care of her and her kids. Surraya in return got exactly what she wanted! Surraya is a little girl with a big personality who definitely won me over. Surraya’s parents especially her father however had a different agenda when he figured  out that he could easily get his hand on some expensive jewelry and flee the scene. 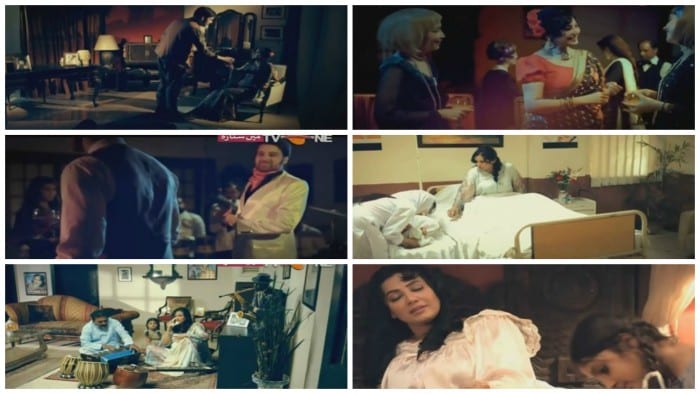 This first episode was extremely refreshing; it had a completely new feel to it and the direction was absolutely brilliant. Every scene was well-conceived, to the point and most importantly highly creative. None of the scenes had a been-there-seen-that feel to it which was definitely something I had been waiting to see in a drama. The makeovers were spot on and the acting by all the actors including the children involved was top notch. Aisha Gul was truly impressive in this first episode, she managed to bring out all the shades of Jharna’s personality – the person she was when she was alone and the star she is when she is among people – beautifully on screen. Her acting was effortless and she definitely made her presence felt. Watching Mikaal Zulfiqar in a different get up was also another plus and at least in this episode his dialogue delivery gave me nothing to complain about. The child star playing Surraya deserves special mention here because her confidence and acting both blew me away!! I think Faiza Iftikhar is finally going to give us a story we have all been waiting for – something new and entertaining. Loved the kind of Urdu that was used in this episode. I really like the OST as well because it is completely in line with the main subject of this play. The director successfully managed to transport me to another world through this episode and I really did not want this episode to end. It is very rarely that you instantly connect with all the characters in the very first episode but for me this episode managed to do just that. I also loved the way the credits rolled in the end, everyone from the director to the sweeper was mentioned in them.

The preview of the next episode showed that Surraya’s parents will leave her behind because they wouldn’t have been able to flee with the jewelry if they took her with them. Although Farhad thinks Surraya is involved too but Jharna will protect her. This is how Surraya will start living a new life, away from her family but with Jhankar Begum and very close to the world of glitz and glam!

How many of you watched this first episode? Did you like it as much as I did? If you missed it I highly recommend that you watch it on http://www.dramasonline.com