Ohkay so, the production of Momina Duraid Productions, writing of Mustafa Afridi & direction of Ehtashamuddin; Mohabbat.pk is Pakistan’s first Mini Drama Serial that commenced this week & has got everyone talking but then what else can be expected when the masters of their trade get together & bring something absolutely amazing for the viewers. Mohabbat.pk can easily qualify as an intelligent piece of writing through which the writer has unveiled a lot of social norms & trends in a very comical way. The way the internet & social media has taken everyone’s life by storm is the main theme of the drama, where some people are shown exploiting it & some are shown making the most of it. All the characters are unique & have so much of personality but then that’s given when you know it’s a Mustafa Afridi script.

The characters of Mohabbat.pk are:

So, the story revolves around the families of homeowner & his tenant; Nazim & Jabir. Nazim (Anum Khalid), the homeowner lives with his wife Mrs. Nazim (Farah Shah) & his son Kazim (Agha Mustafa Hassan). Their tenants who are known as ‘Qabza Group’ are Jabir (Saife Hassan), Jabir’s father (Manzoor Qureshi) & his daughter Zoha (Sara Khan).

So, things get chaotic when Mrs. Nazim & Nagina (Nazim’s sister) have a verbal spat, that’s when Nagina decides that she wouldn’t allow her daughter Twinkle to get married to Kazim. Kazim being emotionally invested in the idea of going to Amreeka after his marriage gets upset. To add more to their woes, Munni (Beenish Raja) & her husband Sikandar (Hassan Noman) come to Nazim’s place because Sikandar’s parents demand ‘pauta’ from the couple, which Nazim mistakes as ‘pauda’. Just when they are dealing with these issues, Kazim goes for rent collection but is shooed away by Jabir after he intimidates him by showing his pistol which he would use back in the day when he was a policeman. This entire pistol intimidation scenario doesn’t sit well with Mrs. Nazim but just because Nazim is too nice & too scared to say anything to Jabir Yahoodi, Mrs. Nazim tries to rile her son up to stand up for himself & sadly its brunt is strategically faced by Zoha, whereas Kazim turns into a hero for his chicken-hearted family. 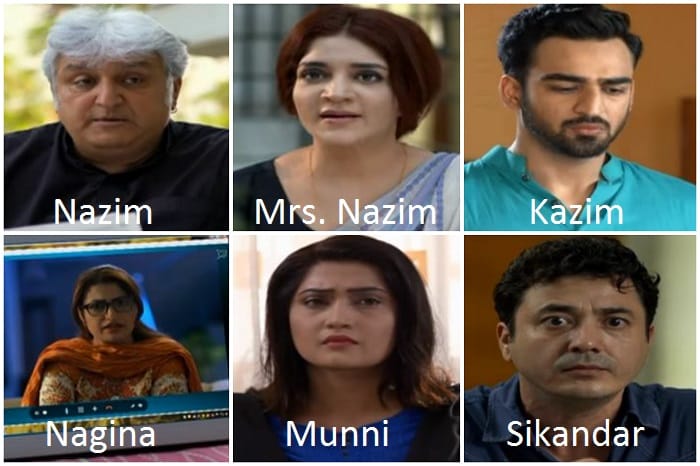 The Qabza Group could already sense that now that Munni & Sikandar have come to live with Nazim, he could anytime tell Jabir & Co. to leave their home. Considering Jabir’s track record of not paying rent on time, Dada Jee devises a plan which would guarantee them a permanent place in Nazim’s home because he is not only an intelligent conspiracist, but he is a bit too well aware of Nazim & Co’s sharafat & masoomiyat. Dada Jee tells Zoha & Jabir to keep their friends close & their enemies closer by displaying ‘munafqat ki mohabbat’ & in this case, the enemies are Nazim & his entire family. Upon Dada Jee’s instructions, Zoha takes the birthday cake & future dated check to Kazim & then she does exactly what her grandfather tell her, which is to instigate Kazim in such a way that he does something stupid & that’s exactly what happens.

Zoha being a video reviewer has a huge fan following on her YouTube Channel & all of her social media accounts, which is something that her Dada Jee wants to put to good use, that is why he stealthily makes the video of Kazim rubbing the birthday cake on Zoha’s face & things get rolling in their favor. Kazim is blackmailed by Zoha because more than living in his place, she wants a place in his heart as she loves him whereas her Dada Jee & father blackmail him for different reasons. Nazim tries to settle things down but just because he is simple & not too tactful, he falls prey to their trap & decides that Kazim will get married to Zoha while completely ignoring the fact that they not only intimidated his son but also blackmailed him using video as an evidence.

I loved how everything was linked & how one thing lead to another. I feel he has to be the coolest Dada we’ve seen in ages because I love the way he supports Zoha & her one-sided love whether it is for Pathan Spiderman or it is for Kazim. It was quite interesting to see Dada Jee being so tech savvy that he actually understood the power of social media & just because he knew that his granddaughter has made a name for herself, he decided to put it to good use. I enjoyed seeing Jabir & his antics too, just because he is suspended & can not afford to pay rent on time, he takes part in this blackmailing as well because he doesn’t mind living in Nazim’s house for free. 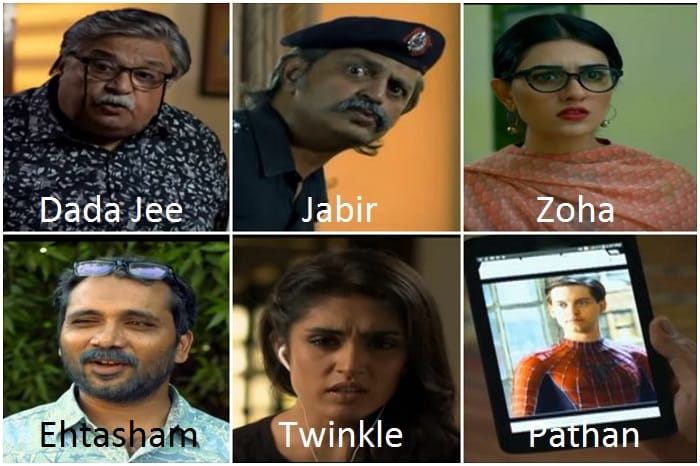 Nazim & his entire family sees Jabir as a Yahoodi who has taken over their territory exactly how Israel has taken over Palestine. Nazim’s family I feel is too shareef for their own disadvantage because even though they have all the right to give Jabir a notice, they in fact fall prey to their blackmailing. Nazim himself being too righteous feels that Kazim is at fault for insulting Zoha so badly & every time he & Sikandar bring out the issue of shooing Jabir & Co. away, they are stopped by Nazim himself as he is too lenient.

Zoha finally comes clean & tells Jabir & Dada Jee that she likes Kazim & just because Dada has got nothing else to do, he takes it another mission which he has to accomplish, which is to get his granddaughter the love of her life. Dada tells Zoha to spread the news of her engagement on social media so that later Nazim & Kazim can not back out. Dada also tells Jabir to spread the news throughout the lane so that everyone knows that Zoha is now engaged to Kazim. Things get a bit more interesting when Retired but the Dutiful Local Spy Ehtashaam tells Jabir that Kazim has a lose character & he is not suitable for Zoha. As usual, emotions get the better of Jabir & he physically assaults Kazim. I am sure that in stead of admitting their own mistakes, Dada Jee will now come up with another plan to make sure that Nazim doesn’t bat a lid on what Jabir did but in stead gets so engulfed in his own guilt that he forces Kazim to get married to Zoha by hook or by crook! 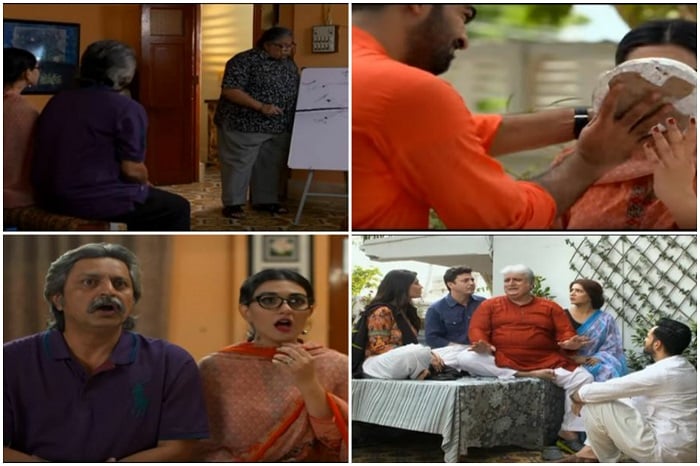 I must say, no one does justice to comedy like Mustafa Afridi. The way the writer has given so many flavors to this drama makes it a treat to watch. What I thoroughly enjoyed the most was seeing how Mustafa Afridi maintained a balance & gave us all sorts of characters, where we have Facebook/Social Media addicts like Dada Jee & Zoha, we also have Kazim who doesn’t even have a Facebook account. Where we have a very intelligent Dada Jee who keeps himself up to date with the International news, we have Nazim who is a laid-back drama buff. Where we have Zoha a hopeless romantic, we have Kazim who is a bit more practically in love with Twinkle because she is his ticket to America. We have Mrs. Kazim who sees Internet as the mother of all evils but then she is surrounded by people who are making the most of it to blackmail her entire family. We have Jabir who is sane but then even he gives in to his father’s conspiracies as far as they guarantee him some relief. We have Munni who is unhappy & contemplates about life but we then have Sikandar who is totally relaxed & cool with whatever course his life is taking & is not at all bothered to take control of the situation. As much as Kazim tries to take charge of the situation & wants to do things, we have his contrast in the form of Sikandar.

I must say while watching all the episodes & second episode especially, I couldn’t stop laughing as everything was just perfect, perfect dialogues, perfect timing, perfect writing, perfect direction & perfect acting. This drama might be short but it surely is sweet & has so much going on for it that you just can not keep track of time. The way the writer added the humor by touching the subjects of politics, Pakistani entertainment news, social media sensations throughout these episodes made me feel connected to everything in a very unique way. I even enjoyed the reviews of Yeh Raha Dil & Sang e Marmar, because I have reviewed both these dramas myself, so I enjoyed Zoha’s take on them quite a lot. References of Taher Shah’s Eye 2 Eye, Sahir Lodhi’s dialogue baazi ‘Are you God, are you Demi-God’, the constant mention of Israel/Palestine & America were a few gems that made me laugh out loud. It takes a lot of effort to convey comedy in such a convincing manner while still shedding a light on the issues that people might be faced with & I must say the team of Mohabbat.pk has achieved it phenomenally.

Also, a little news for the readers of Reviewit.pk, Saife Hassan was kind enough to let us; the team of Reviewit.pk know that he is the one who named this drama & he titled it Mohabbat.pk after Reviewit.pk. Also, the character of Zoha is inspired by us; the drama reviewers. :) It really means a lot to us because they have not only acknowledged the drama reviewers but our entire website, which is something huge. :) I remember watching a scene or two of Mohabbat.pk while reviewing Yakeen Ka Safar the other day & in that scene Zoha was reviewing Yeh Raha Dil, so I kind of felt happy that they are showing a character who is a drama reviewer, like I immediately related it to myself & after that we got to know that Reviewit.pk & its reviewers were the inspiration for them. As much as I loved Zoha’s Drama-Reviewer character, as much as I enjoyed seeing how enthusiastically she was voicing her opinions regarding the wrongs (according to her) that were shown in our dramas & as much as I laughed at seeing how casually she was into blackmailing, I must say the drama reviewers of Reviewit.pk are completely different from her haha! ;)

I must say all the actors who have performed in Mohabbat.pk have such a perfect comic timing because it is a pre-requisite to make any comedy work. Manzoor Qureshi, Saife Hassan, Farah Shah, Sara Khan & Hassan Noman deserve a special mention here because of the flawless portrayal of their characters. We all are by now well aware of Mustafa Afridi’s wit so the moment I knew he is the writer, I knew I was in for a ride. Ehtashaamuddin deserves full marks for directing this drama to perfection like everything about this drama is just perfect. I can’t wait for next set of episodes already as the precap suggested a lot more blackmailing, comedy & drama. Please share your thoughts about the first three episodes of Mohabbat.pk.