In the midst of plays that vehemently reject the concept of headstrong and intellectual female characters, and continue to thrive on the bechari aurat scenarios, Mol dares to be different. I have to admit that I am watching this show because of the female protagonist – Emaan.

Muhabbat ka naulakha haar meray naseeb mein na tha. Emaan believed that Sheheryaar married her because he loved her and you can’t really blame her – a DC comes to Sukkur, crosses paths with his subordinate’s daughter, asks for her hand in marriage after two to three brief meetings, marries her despite his parents’ strong opposition – no wonder Emaan was certain that Sheheryaar loves her. Sheheryaar, on the other hand, doesn’t mince his words while stating that ‘love’ had nothing to do with his decision to marry Emaan. Emaan came across as someone with a strong sense of self, and he took her for someone who would allow him the ‘space’ and ‘freedom’ he needs to live his life on his terms. He wastes no opportunity to remind Emaan of the fact that no one has the right to challenge his ideas about right and wrong. Be it his belongings, his projects, or his wife – Sheheryaar’s ‘commitments’ matter a lot to him. This is where I feel for Emaan because Sheheryaar’s views against the very idea of love and the way he sees confessions of love as ‘jhootay labels, teenagers ki baatain’ shatter her. No matter how much Sheheryaar lays emphasis on ‘mujhay laga kay tum doosri aurton ki tarah nahe ho’, Emaan, like any woman, longs to be loved. The way Sheheryaar sees this relationship is very different from the way Emaan views it. Emaan is his wife now, but Sheheryaar insists that his marriage shouldn’t change the way he used to live his life, and this is where I find Sheheryaar wrong. I hope he does realize that he’s not single anymore, and now with a wife who makes a lot of effort to make sure that he gets the ‘space’ he is always going on about, he should come to realize that it’s not always about him. Sheheryaar can see that his views upset her but that doesn’t stop him from making it clear that he doesn’t love her, and her absence or presence would make little or no difference to his way of life. In the opening scene, the way Sheheryaar cancelled his official dinner just because Emaan had planned an outing kind of showed that he is considerate of her feelings, but the scenes that followed suggested otherwise. I like how Sheheryaar’s character is not one-dimensional. I haven’t exactly made up my mind about him because though there’s a lot about him that I don’t find likeable, Sheheryaar doesn’t make an awful husband. He is obstinate, brutally honest and a bit insensitive, but is he bad at heart? I withhold my judgment for now. 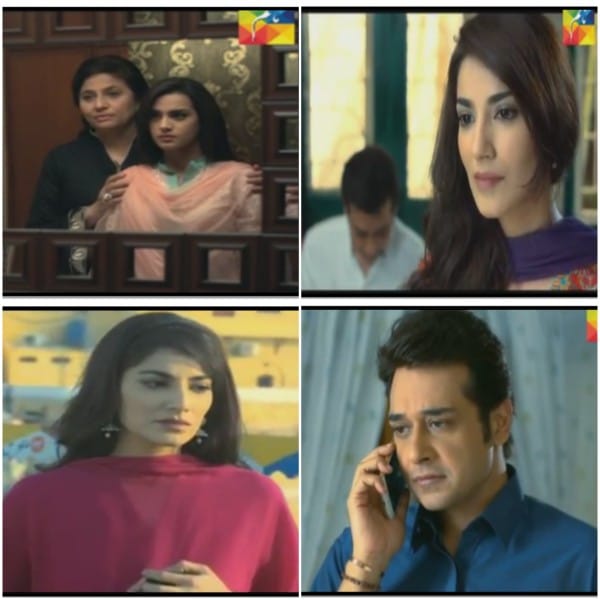 Emaan can’t help but question where she stands in Sheheryaar’s life. The women we see on our screens take on different roles; we see them as wives, daughters, sisters and mothers. But it’s strange that our dramas, as female-centric as they are, rarely talk about a woman’s own identity. Much to my delight, Emaan here questions: mein kaun hun? The thing about Mol’s characters (I’m talking about the leads here) is that they are very real, very human. They question the obvious, they voice their fears, and they talk about what’s bothering them. I liked how Emaan asked Sheheryaar why he didn’t tell her he doesn’t love her when they met in Sadhu Bela because things would have turned out differently if Emaan had known that Sheheryaar only ‘fell for her personality’, the way he puts it.

Saas bahu showdowns, dusri shadi, shukki husbands, extra marital affairs – these are the problems onscreen couples usually grapple with, but Sheheryaar and Emaan’s case couldn’t be more different. The clash of personalities and the issues they deal with are a far cry from the ones we see every now on then because their problems are not over the top – they are very real and 21st century-like.

The trip to Sukkur was short and underwhelming. Emaan ‘s mother doesn’t exactly understand what’s bothering her daughter, and her approach is a little superficial; as long as Sheheryaar is taking care of her and coming home on time, there’s nothing to fret about. And of course, the ultimate solution to every marital problem – bus Allah Emaan ko aulaad say nawaaz de, sab theek hojayega… Little does she know that Sheheryaar has problems with that too!

Speaking of Hajra and Zareena, this may be harsh, but I can’t stand them! The way the two desperate ladies forced Emaan to come with them despite her protests was actually funny. Emaan respects Sheheryaar’s decisions about his family. Sheheryaar understands his family’s motives better than anyone else, and it is actually very sensible of him to keep Emaan away from these people. The promo tells me that Sheheryaar is very right about his family, and I wonder how difficult it must have been for a man like him to live with a family lost in khandaani riwayaat, rasmain etc.

Rohail and his son’s track is pretty much where it was last week. Rohail has no one to look to when it comes to his child’s needs so Emaan is taking on the motherly duties. I can understand her growing affection for the boy because Sheheryaar just struck her with his anti-love speeches, she is pretty lonely, and spending some time with the kid is the only thing that makes her happy in the true sense. But going by Zareena’s ‘mein ussay chain say jeeni nahe dun gi’ vow, I doubt that her frequent visits to Rohail’s place would win her any points.

Going by the promo, I have a feeling that next week’s episode would have a lot to do with Sheheryaar’s family. Let’s see how the story shapes up. Are you watching Mol? What do you think of the latest episode? Voice your thoughts!