Ohkay so, written by Rabia Razzaque, directed by Nadeem Siddique & produced by Abdullah Seja; Moray Saiyaan commenced on ARY Digital at the prime time slot on Tuesday. I just watched the very first episode & I can I say that I am quite impressed. This drama not only brings a change in terms of the scenery but in terms of the cast too. To be honest, all throughout the episode, I was actually quite happy to see some new faces & I commend the casting director for choosing newcomers. I know it must’ve taken a lot of brainstorming on the drama-makers part to come to a decision whether they should give a break to the new faces or not but I’d be happy to let them know that they definitely made the right decision. I am not sure how the drama is going to unfold but it surely has began at a very promising note.

We were introduced to a single family which was pretty scattered & divided but there was one such person who believed in binding them & I am sure he will make that happen. Zakia (Irsa Ghazal) is a single mother of two Nimra (Kinza Hashmi) & Anas. She has a support of her brother Waris Afridi (Firdous Jamal) who has a son Ghaziyan (Uzair Jaswal). Ghaziyan has just returned from the US after completing his education as a petroleum engineer. Ghaziyan & Nimra are engaged to be married & it seems that Zakia is quite possessive about Ghaziyan, so much so that she keeps on telling her daughter to take care of herself because she feels that way Nimra will be able to keep Ghaziyan’s attention intact. Not sure if it is because of a failed marriage or due to her own personality, Zakia seems to be quite an egoist & to some extent paranoid, that is why the mention of her ex-husband Kabeer upsets her, she has estranged her sister, she controls her daughter & wants to control her nephew & Nimra’s fiancé Ghaziyan too.

We then got to see that Zakia & Waris also have a sister Gul Zeb/Gul Bibi who came into their lives after their father’s second marriage. This is the reason why Gul Zeb has been estranged by Zakia as she thinks her father made a mistake by going for a second marriage, so now when he is not alive, there’s no reason for her to hold onto the relations that according to her were merely a mistake. Waris seems to be quite normal when it comes to Gul Zeb but Zakia on the other hand don’t want to associate with her sister, so much so that she doesn’t appreciate the fact that Ghaziyan spends time with her.

Gul Bibi has a niece Zubaria (Neha Rajpoot), who often visits her & is a medical student. Zubaria lives in a hostel & keeps on visiting her father, brother Jamshed & sister in law Afshan. Even though Zubaria is young, she is quite responsible & mature, that is why she makes sure to give her family & her aunt some time out of her busy schedule. Ghaziyan & Zubaria meet at Gul Bibi’s place & that’s when Ghaziyan feels that he needs to cheer Zubaria up as he thinks she is missing a lot on her life by keeping herself engrossed in her worries. For Ghaziyan, Zubaria is like a very fascinating mystery & he wants to get to know her, to actually understand her better. It looked like more than the need for Zubaira to be cheered up, Ghaziyan just wants to get close to her to overcome the curiosity in his mind & heart about Zubaira. Even though Ghaziyan is engaged to Nimra, he doesn’t hold back in expressing his feelings about Zubaria in front of Gul Bibi. Gul Zeb knows that if anyone in Zakia’s family will find out about what Ghaziyan intends to do, as in how he intends to befriend Zubaria, no one will be happy but Ghaziyan is someone who believes in doing what his hearts tells him to.

Ghaziyan knows what sort of a person Zakia is & how she believes in controlling those who are close to her, but he is quite independent emotionally that is why without worrying about Zakia, he not only meets Gul Bibi but also intends to spend more time with her niece Zubaria from now on. I liked the accidental interactions between Zubaria & Ghaziyan. As much as Zubaria didn’t want to be associated with him, Ghaziyan made sure to have a conversation with her because he knows she needs someone to teach her how to be happy & just not be always worried about smallest of things in life. Ghaziyan comes from a completely different background & even though he has lived quite a nice life, it was actually good to see him being in touch with his emotional side where he felt bad seeing how his family was broken into pieces. 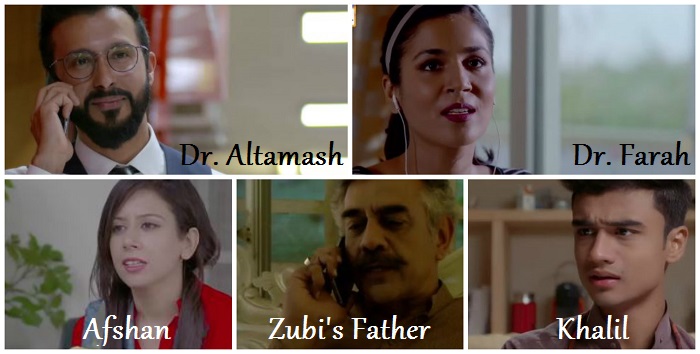 We also got to see a conversation between Dr. Farah (Ayesha Toor) & Dr. Altamash Kabeer (Ali Kazmi). I believe Altamash will be Kabeer’s son, the same Kabeer who also happens to be Zakia’s husband or ex-husband. I think Zakia must be the reason why her marriage failed because going by the things Nimra said, looks like Waris being a rational person told everyone the truth that Kabeer never faltered when it came to his responsibilities but Zakia on the other hand painted a completely different picture in front of her children, that is why Nimra seemed a little confused but I am sure it will be interesting to see that track unfolding too. I liked how Nimra even after living with a rigid mother like Zakia, had the sense of differentiating between right & wrong. Nimra seemed a lot more optimistic & positive in comparison to Zakia but Zakia on the other hand kept on instilling all those fears & complexes in her daughter that she herself has!

Overall, the first episode was done beautifully. Starting from direction to locations to dialogues to situations each & everything was spot on. Even though it happens to be the very first drama of Uzair Jaswal, he seemed pretty comfortable when it came to acting. Neha Rajpoot seemed a little stiff & hesitant in terms of acting as these must’ve been the very initial days of shoot so that is why her lack of confidence was evident from her body language but I am sure we will get to see an improvement in her performance as the episodes will progress. Kinza Hashmi on the other hand seemed quite confident & acted brilliantly too. I must say, I can’t thank the casting director enough for choosing some new, fresh & young & beautiful faces for this drama & for not relying on those actors who are always pasted on our screens, what a relief! The way they established a relation between Zubaria & Ghaziyan was actually quite cute, you could actually feel a connection between the two, which is great!!!

I must say the locations they chose had a great impact on the overall feel of the drama & made things seem quite appeasing. The note at which the drama has begun seems quite promising, even though it has the entire love triangle happening but the supporting characters are so strong that things are definitely going to be interesting. I think they introduced the characters & their back stories in a very apt manner, like it seemed quite detailed for the very first episode. Also, I liked the fact that after letting us know about the relations that these guys shared, the writer also showed us that all these characters had something going for them in their lives, like Zubaria was studying to become a doctor, Ghaziyan became a petroleum engineer & Nimra was a badminton player, like it was good to see that these young characters weren’t only fixated with the idea of marriage & had nothing else in their lives! The dialogues were nice too & I liked the interactions between Ghaziyan & Khalil as well. I must say, for the very first episode, I am impressed & I an’t wait for the next episode already. Please share your thoughts about the very first episode of Moray Saiyaan.

ps: I hope The Terrific Tuesday luck touches this drama too as I have always been lucky with the Tuesday dramas haha. I hope Moray Saiyaan takes after Besharam & turns out to be a great drama as well. ;)