Assalamoalikum everyone. Hope you are all enjoying the blessings of Ramadan.

The ninth episode of Mubarak Ho Beti Hui Hai was aired today. The pace was a little slower than usual but there were some very interesting new leads generated today. The story is very well integrated and no scene seems out of place in the whole episode.

So Naheed’s stay in Shehzad’s house has come to a very ugly end. Fariha is a true example of conniving bhabis who make their husbands forget their ethics and responsibilities. He is not even willing to listen to Naheed, rather he is brimming with hatred for his own sister on the basis of Fariha’s lies. I find Shehzad even worse than Sadiq as he is comparatively more educated and knowledgeable, yet as thoughtless and selfish as Sadiq despite his blood relation with Naheed. 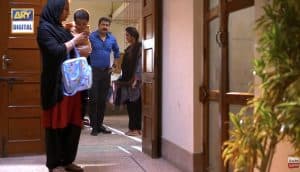 Naheed settles in well as khala Batool’s tenant with the help of a very humane neighbour. She is one of the most impressive female characters I have ever seen. Despite her limited resources, she is the best role model a daughter can ever have. Her grit, her patience and her big heart make you truly respect her. Not once did she falter in her belief that her daughters are not a burden, rather the ones who think of them like that are at fault. Not once has she taken out her frustration at her daughters. Not once has she questioned her decision to leave the indignity of her husband’s house and not once has she back bited all those who have wronged her. She is just focused on giving her girls the best life despite all the challenges she has to face. 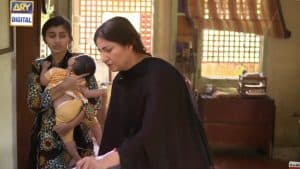 Saima and all the girls playing the roles of her  daughters have such a realistic chemistry that you tend to forget it’s a drama. They truly look like a fivesome determined to claim their right to live respectfully despite all the odds.

The neighbour was a breath of fresh air and only the second person in this drama as yet who has any sort of compassion left. I would have loved to say the same about khala Batool. I was really counting on her to be Naheed’s support but she seems quite mean, though maybe not as much as the two previous households Naheed has lived in. Her advice makes sense at times but her tone, her words are not very kind. I was undecided about her character till the end but the promo proved that she might indeed be one of the many villains. 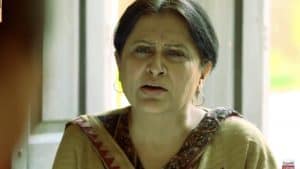 The most interesting development is that Anila’s and Sadiq’s much celebrated son is mentally retarded. It was karma peeking up its head at Anila who had thought she was invincible. But as a reader pointed out last time, this does not give a very enlightening message since mentally and physically challenged kids are not a god sent punishment. Under the circumstances of this drama though, we can’t help commenting on Anila that this serves her right. Not because she has to raise an abnormal child but because she had made Naheed’s life miserable over the diagnosis of her girl. Atleast she would now feel a fraction of the pain she had caused another mother. 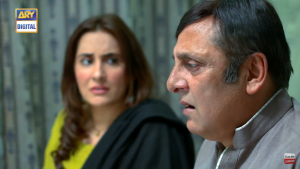 Just like some people never learn, this incidence has made her become all the more negative, controlling andd manipulative. Her next demand that Sadiq put both his shops in her elder sons’ name is very unfair but looks like she is going to achieve that.

Now moving on to Sajid.. what can you say? He is so stupid and so spineless that no sensible decision is expected out of him anytime soon. This is what happens when mothers treat their sons as puppets and use them against their wives. They turn into men like Sadiq who never become able to develop their own perspectives. Rather, they fall into the trap of one manipulative woman after the other. The very quality of Sadiq that his mother was exploiting against Naheed and her daughters, is now being used against herself by Anila. Sajid Hassan is phenomenal as Sadiq, makes you wonder if there is any character the veteran actor cannot make his own.. don’t think so. 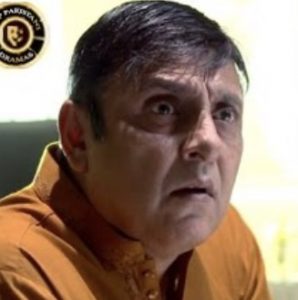 Now his mother is the one scaring Anila of Allah’s judgment. This is such a powerful example of human psychology, we tend to fear God only when we are wronged and helpless but when we have power, we turn into one ourselves. 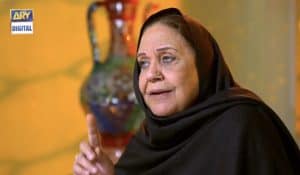