Even after 10 weeks Muqabil continues to be thoroughly entertaining and unpredictable. Apart from some power-packed performances, this drama also has some exceptionally impactful characters to its credit which are also brand new. Muqabil is a must watch for all those viewers who are sick and tired of watching same old stories. This episode also had quite a few meaningful conversations and strong messages.

The conversation between Arman and Pareesa about why Arman didn’t go through her things was one of the most meaningful conversations of this episode which covered a great deal and gave the viewers more of an insight into what was going through Arman’s mind and how Pareesa was never like any other teenager her age. All those things which Arman said to Pareesa were perhaps an attempt to find out if the reason she did not want to have a bond other than that of friendship with him was that she was involved with someone else or had lost someone she had loved once. Arman thought that Pareesa was a romantic person by nature therefore she was fascinated with flowers, he had no idea why Pareesa was so attached to her flowers! Pareesa on the other hand could not even imagine feeling that way about any man at all because of the ugly experience she had at an early age with the man she trusted so much and the one she looked up to like a father figure.
The fact that there was no such concept in Pareesa’s life went to show yet again how deeply she was effected after she was violated by Mahmood. This was something which changed her completely and even though she is a strong person, she can never undo (even in her mind) what happened that day. 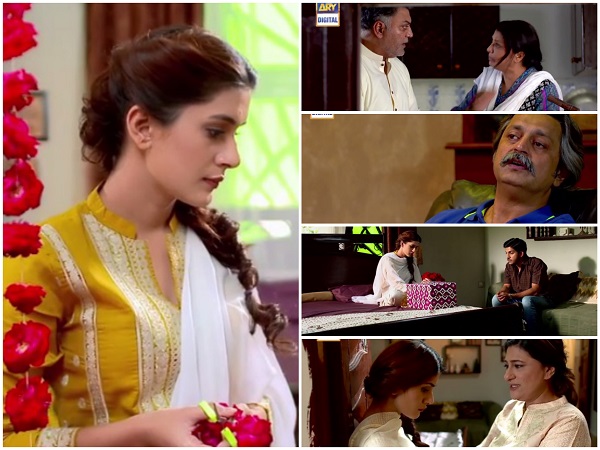 Pareesa’s character is brilliantly etched-out, she is a fighter in her own way, she learned how to survive even with all her scars by using different means to make herself feel useful. She protected her flowers and her maid’s daughter and distanced herself completely from her mother in particular because she held her equally responsible for what happened to her. It is however good to see that for a change the victim’s mother is trying her best to understand her daughter and is shown feeling guilty a lot of times too. Pareesa has given her mother and Mahmood the perfect punishment, she definitely thought this through. Her life was always going to be the same no matter where she lived or who she got married to because so far Pareesa has been shown as someone who lives in her own world no matter who is around her and where she is.

Although Arman and Pareesa’s relationship and the circumstances in which this marriage took place is anything but normal but even then Kubra Khan and Mohsin Abbas make the perfect on screen couple. They share great on screen chemistry and their characters compliment each other. Arman is a sensible and caring person who will be willing to do a lot more for Pareesa than anyone would have. Mohsin Abbas’ performance was beyond brilliant throughout but in the last scene he completely stole the show.

Mahmood found out exactly what was going on between Arman and Pareesa and that was the first time that the viewers saw Mahmood regretting what he did in front of someone else. I am waiting to see what Shah Sahab says to Mahmood, I hope we get to hear his reply. Asif Raza Mir’s eloquent dialogue delivery and his natural acting make his scenes a treat to watch. Saba Hameed is another actress who pays attention to every little detail and makes sure that her expressions do the talking even when she does not have any dialogues. 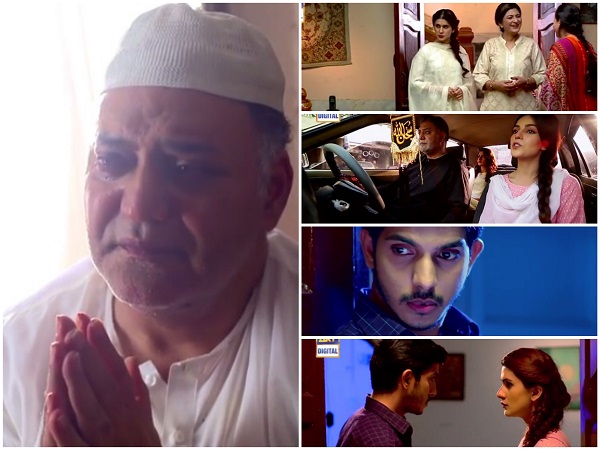 One of the best scenes of this episode was the one in which Pareesa told Safia off for leaving her daughter at home. Watching a girl who was raped as a child saying something like this in loud and clear words was a very strong message which needs to be heard by every parent out there. The significance and impact of what Pareesa said was more because of what she had gone through. She strongly believes that her parents could have protected her if they were not busy socializing. Mahmood’s expressions and the way Pareesa looked directly at him when she said all that to Safia added to the intensity of this scene.

Tonight it wasn’t just Arman’s mother who was screaming at the top of her lungs but her daughter joined in too!! A lot of the scream time Shaheen Khan got in this episode covered similar scenarios therefore her dialogues could have been easily chopped down. Her character and all the attention it is getting is the only part about this play which is annoying, otherwise Muqabil is picture perfect in terms of script, direction and acting.