So, either it is because when you watch a drama without any strings attached you feel differently and when you sit and watch each scene and listen to each dialogue as a reviewer it is a different story – or, I have the anti Midas touch for any drama I think is interesting to review – suddenly stops being just that!! Or maybe these couple of episodes are just dragging the story a bit and the drama will hopefully get back on track soon especially as its nearing the end now – yes, hoping that must be it!

I had wondered what Khawar’s reasons may be to literally push Saleem towards Gulshan and now I know. He was definitely not a true friend, we had established that at the very start but I had thought he may be a mufta and just a faarigh person with warped ideas and beliefs and rubbing them off on his friend but he has a proper agenda now and that is to make sure Saleem falls for Gulshan and that Noor also suffers for having ‘meddled’ in his affairs and having a hand in Saleem seeing Khawar’s true colors. I am amazed that Saleem who can be so stubborn and obstinate when it suits him, chooses to fall for Khawar’s half baked statements and is chummy with him all over again. The conversation between the two at Saleem’s shop was very convincingly done where you could see Saleem being all chuffed up by the attention and respect Gulshan and her family were showering him with. 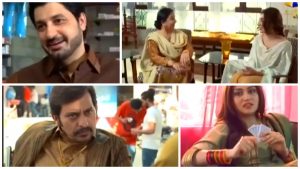 Although Noor and Saleem’s track is ‘supposedly’ the main one in this story, we also have a few other stories running simultaneously. A lot of screen time went into Waseem and Zeb’s story in the past few episodes and now the focus was more on Sofia, her brother and Mehru. I actually like Mehru and her husband’s relationship where the two find lots of comfort with each other so even though I felt bad for them with the shart Sofia’s mother in law has laid out, I wished there was more focus on Noor and Saleem. Noor still has not been able to tell Saleem about her pregnancy and I cringed when she is sitting reflecting and her mother in law echoes the same thought earlier as to how now that Saleem will hear of the baby he will change his attitude towards Noor. Masla he saara yeh hai in our dramas and society, ‘shaadi ho jaye, theek ho jaye ga’, ‘bacha ho jaye, theek ho jaye ga’, and the sad bit is that while the ever scheming saas/nand/bahu or desperate in love woman characters are sometimes hard to relate to, statements such as these are very common. Which is why even though this episode seemed to drag a bit, yet a lot of scenes and characters were quite easy to relate to. Noor’s thoughts as to how Saleem may change now, Saleem lapping up attention from new corners, Tabassum Khala’s statement as to how a man when ‘fed up’ with his wife is drawn towards seemingly greener pastures. It all happens far more often than we would like it to I suppose.

One thing I was thinking about now was how Saleem’s heart has totally hardened towards Noor. The complex of being lesser educated, the seed of suspicion of something between her and Waseem, hearing of her broken engagement – has that all made him so bitter? There were the moments when he would watch her and feel remorse for his behaviour, when he dressed in the suit to make her happy then missed her when she was away – has that all taken a backseat now that Khawar’s brainwashing and Gulshan’s chamak dhamak has blinded him? Speaking of blinding, uff what was with all the lighting in today’s episode? Especially in Noor and Gulshan’s scenes when the sunlight would flare in the background – very annoying. 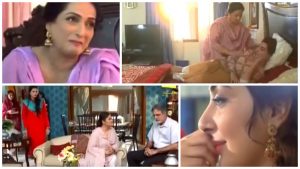 There were very little in fact, wait there was no scene between Noor and Saleem in today’s episode and although Saleem’s antics, I know I know, make him a dislikable character but Syed Jibran’s acting is so delightful, the gold watch, the visibly chuffed up ego is so spot on I can not help but be impressed at how he has translated Saleem’s character so perfectly! I really can not stand Gulshan’s scenes for the way she speaks is OTT especially as she talks the same way to her mother and sister too! I feel my head must tilt at very odd angles in slow motion while following her scenes the way she cocks her head and gazes from side to side. Man!

Twenty episodes down, Saleem slowly but surely falling for Gulshan, Noor’s suffering in full swing, Sofia and Saas, Mehru and Saas – I do not see this drama ending in the next episode or two. I just hope things pick up and looking forward to seeing how Saleem reacts and his interaction with Noor when learning of the khushkhabri. Saleem miyan will get his nihari – I am left craving for some myself now! Please do share your thoughts about this episode.