When a couple of episodes ago, Saleem seemed to come to his senses I wondered why the next episode was not the last one – until I watched it and realized he had not truly come to his senses. He had given up Gulshan but had not changed his ways entirely and was still short with Noor. I suppose heart attack zaroori tha and he finally was able to tell Noor what she meant to him. Man!

Twenty nine episodes of a drama which could have made much more of an impact in at least ten less episodes. The first ten or so episodes were nothing to write much about – literally- which is why I only began reviewing it after those episodes. While the episodes that followed were interesting, entry of Gulshan and the whole dragged out affair were anything but.

I am not sure whether the original story was dragged out in such a way or the director chose to, either way even though I enjoyed the drama at times, most of the time I found it hard to sit through. Jibran Syed and Ayesha Khan act really well which is probably why I continued watching. Whether it is because it is a Geo production, actually scratch that because not all Geo productions have this feel, but even when I watched an episode on TV, it did not have a pleasing effect. 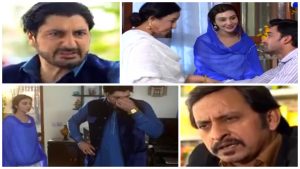 I was drawn to Serwat Nazir’s stories after I watched Socha Na Tha – until that went haywire too – and also of course, Besharam. Even though those of us who are die hard romantics may like to see the husband appreciating and falling in love with his wife, I am finding it a bit tedious to have to see in one too many drama how he goes totally astray and then returns to a forgiving wife. While the last episode kept focusing on how Noor would have urged her daughter to make her marriage work, I am not sure being the sacrificial lamb is always the best step forward. Anyway, to each his own.

Would I recommend this drama to anyone? Only if they were prepared to fast forward quite a few scenes, (read episodes) and if they did not know the end and wondered if Noor and Saleem live happily ever after. What did you all think of this drama? Would love to hear your thoughts – sola aanay sachh! 